The cryptocurrency bull run has stalled in the face of mounting regulatory pressure, and that spells trouble for these transaction-based brokers.

Cryptocurrencies have been the investment story of 2021 with gains for some of these digital assets running circles around the S&P 500 stock market index.

The cryptocurrency industry has often been shunned by investment professionals and viewed as a retail investor's game. However, that seems to have changed with the successful public listings of companies like Coinbase (COIN -2.71%) and Robinhood (HOOD -1.38%), which offer brokerage services to people looking to buy and sell digital currencies.

The two companies have helped pull cryptocurrency into the mainstream, but the risks are mounting for both of them. Even the most popular cryptocurrencies are struggling to show much real-world utility, and lawmakers are cracking down on the industry as a whole. 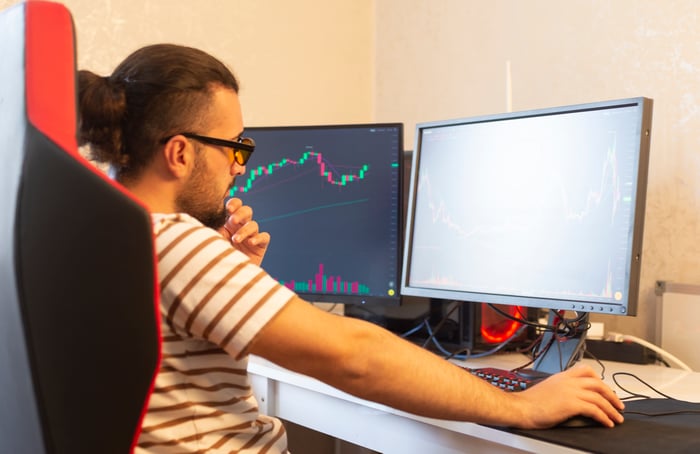 Coinbase has been in the headlines a lot over the last few weeks, given its spectacular war of words with the Securities and Exchange Commission. In short, the company sought to launch its Lend platform, which would allow customers to earn interest on their cryptocurrency holdings, but the SEC has blocked the move, citing problems with the way the product is classified.

The SEC is arguing that Lend is a security and therefore subject to securities law, whereas Coinbase has complained that current rules aren't applicable to cryptocurrencies. But in the end, Coinbase withdrew its launch of the product (for now).

It's not the most stabile environment for your investment dollars, but that aside, there's no ignoring Coinbase's explosive growth. 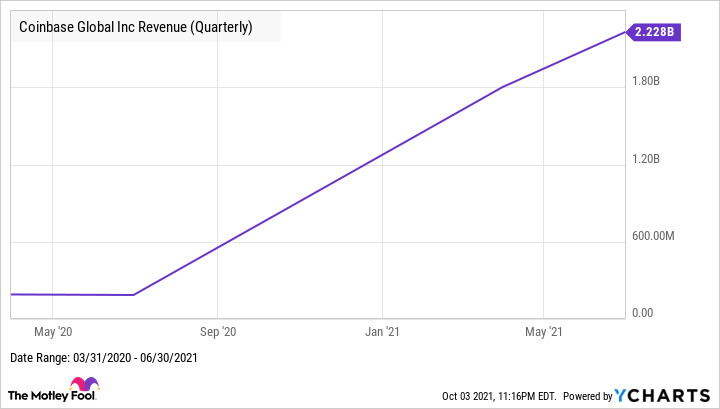 The company reported revenue in the first half of 2021 that was over 10 times higher than what it generated in the prior-year period. However, that performance is unlikely to be replicated in the future. During those six months, the market experienced a surge in the value of most popular tokens, taking the global value of all cryptocurrencies from $780 billion at the start of 2021 to over $2.5 trillion just five months later. Prices have since tapered off and failed to reclaim those highs.

Coinbase's entire business model relies on customers buying and selling tokens, as the company earns transaction revenue when they do so. These fees make up over 95% of the company's top line. When cryptocurrency markets are placid, Coinbase makes less money, and many investors are skeptical about the elevated market activity lasting into the new year. While analysts estimate Coinbase will generate $6.88 billion in revenue this year (up from $1.28 billion in 2020), they think it'll fall to $6.20 billion next year with earnings per share declining over 50%.

For that reason, Coinbase feels like a short-term play as opposed to a healthy company with sustainable long-term growth. With the stock down 46% from the all-time high it reached in April, it appears many investors are wary of this reality.

And unfortunately for cryptocurrency bulls, the wild rally earlier this year didn't really coincide with widespread consumer adoption, which is what really matters. If Coinbase is stuck largely with its one-dimensional brokerage model, then its future is tied to rampant speculation rather than a true use case prevailing in the industry.

And that is why I'm staying away from the stock.

Unlike Coinbase, Robinhood wasn't founded as a cryptocurrency platform. It began as an online brokerage catering to conventional assets, including stocks and options contracts -- and it remains incredibly successful in that area.

But Robinhood has faced regulatory scrutiny even in those regular markets, as its "gamified" trading app has been found to encourage risk-taking behavior among its millions of young users. To make matters worse, the company made a huge pivot this year to focus on cryptocurrency markets to satisfy its young audience, at the very same time the SEC was reviewing the industry as a whole.

While cryptocurrencies make up just 22% of Robinhood's customer assets, they now account for over 52% of its total transaction revenue. That suggests Robinhood's young investor base is trading cryptocurrencies with greater frequency than stocks, and they are paying higher fees for doing so. Essentially, Robinhood's pivot to cryptocurrency markets might be further enhancing its customers' appetite for risk.

Aside from these factors drawing renewed attention to Robinhood from the SEC, there's also the fact that tokens like Dogecoin probably won't have long-term staying power. Only 1,700 small businesses worldwide accept it as a payment mechanism, according to Cryptwerk, and that number is growing at a rate of about 50 businesses per month. It's unlikely Robinhood can build a long-term business on what is ultimately a vehicle for speculation.

To cap off Robinhood's regulatory woes, it's coming off a $65 million fine from the SEC (from Dec. 2020) for misleading its customers about the way it generates revenue. Despite it being a zero-commission platform, the regulator found its customers were being charged hidden fees via its payment-for-order-flow business model that more than offset the savings on trading commissions.

Analysts believe Robinhood can increase its revenue 37% next year, but that's not enough to make me ignore the plethora of hurdles the company faces, especially with its rich price-to-sales ratio of nearly 18 times.

As it stands, I'm not buying.

Jim Chanos Is Right About Coinbase
358%