Please ensure Javascript is enabled for purposes of website accessibility
Free Article Join Over 1 Million Premium Members And Get More In-Depth Stock Guidance and Research
By Rachel Warren - Oct 8, 2021 at 5:45AM

Here are two great stocks to buy this month.

If you have $10,000 to invest this month, you're likely looking for a few high-quality businesses to put that money into that can fuel generous returns for the long haul. With such a solid amount of investing capital, you can easily distribute that cash across any number of great stocks. The most successful investors are the ones that have bought and held onto fantastic companies across a diversified collection of industries for many years.

In keeping with a long-term buy-and-hold mindset and a diversified portfolio strategy, we're going to look at two very different companies today that fit that bill: a top pot stock and a well-known e-signature stock. 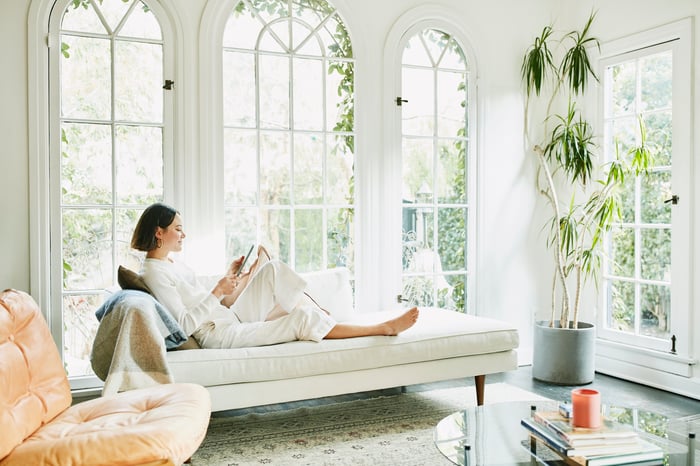 Green Thumb Industries ( GTBIF -6.11% ) is a multi-state operator with a fast-growing list of retail locations and its own proprietary cannabis brands. It sells a range of products, including vape, flower, and concentrates.

The marijuana stock currently has 65 retail stores spread across the country in key cannabis states including Pennsylvania, Illinois, Florida, New Jersey, Massachusetts, and Nevada. It also has 16 manufacturing locations and holds licenses for 114 total retail locations. When you consider that the company was only founded in 2014, it's made significant headway in the U.S. cannabis market in an extremely short period of time.

In the company's most recent quarterly report, management said that revenue was up 85% year-over-year. And in the first six months of 2021, Green Thumb's revenue jumped 87% compared to the year-ago period. The second quarter of 2021 was also the fourth quarter in a row where the company reported positive net income, and its sixth quarter in a row of generating positive cash flow from operations. The company closed the second quarter with about $482 million in total assets vs. $198 million in total liabilities.

Despite the company's rapid rate of growth, it's maintaining high liquidity, consistent profitability, and enviable revenue jumps. Green Thumb Industries looks on track to generate significant growth in the years ahead. With shares up about 100% over the past year alone, this is a great pot stock to jump on now and wait for the returns to flow in.

E-signature company DocuSign ( DOCU 6.51% ) is known for its variety of cloud products and services used by individuals and businesses around the world. DocuSign offers hundreds of integrations with products and platforms from other well-known tech companies, including Salesforce, Microsoft, and Oracle, and had more than one billion users globally at the time of this writing. Today, the company controls a whopping 64% share of the entire e-signature market.

Over the past five years, shares of Docusign have surged by an incredible 545%. That is more than four times the S&P 500's gain during the same period.

In the second quarter of 2021, DocuSign reported that its total revenue increased 50% year-over-year, and that billings were up 47% year-over-year. On a GAAP basis, its gross margin was an attractive 78%, up from 74% in the year-ago period. The company also boosted its free cash flow to $162 million, whereas it reported free cash flow of less than $100 million in the year-ago quarter.

DocuSign remains a compelling buy-and-hold investment despite its insane share gains in recent years, due to its strong track record of revenue growth (which it continues to build upon) and its compelling competitive advantage. Bear in mind, the global e-signature market in which DocuSign is the dominant force is only growing. According to a recent study by ResearchAndMarkets.com, the global e-signature market is set to realize a valuation of nearly $14 billion by the year 2027, a massive jump from its 2020 valuation of $2.5 billion.

Analysts think the stock has upside potential as high as 52% over the next year. Patient investors who buy this stock now could see equally momentous gains in the years ahead.