A combination of factors, including low interest rates and aggressive government spending, has put the stock market in a great position to move higher. It's a particularly good environment for technology stocks, because money is cheap, and they typically need a lot of it to bring their products to life. The best performers convert these favorable conditions into strong revenue growth and, eventually, earnings.

Lending platform Upstart Holdings (NASDAQ:UPST) laid a rock-solid foundation in 2020, and it's set to grow revenue more than fourfold by the end of 2022, according to Wall Street estimates. 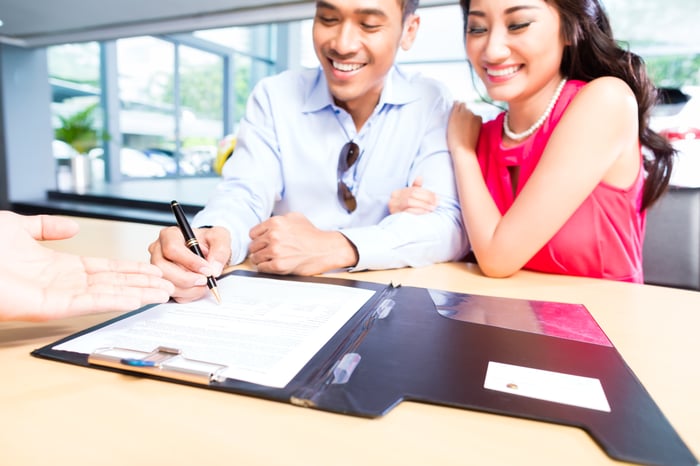 Upstart is a trailblazer

Explosive is not a hyperbolic descriptor in this case. Upstart's stock price has soared more than 660% in 2021, taking the company to a $23 billion market valuation.

It's a first-of-its-kind artificial intelligence (AI) company, applying the technology to transform the way banks assess potential borrowers. Rather than measuring creditworthiness through income or assets, Upstart's algorithm factors in thousands of nontraditional metrics like where the borrower went to school and their employment history.

The result is 75% fewer defaults for the same number of approvals -- an attractive proposition if you're a bank. Upstart's business model means it has no exposure to credit risk, because it earns revenue through fees for originating loans and subscription payments from financial institutions that use its loan application software.

It means more loans for borrowers, and that's a win for banks.

Upstart has typically focused on small-scale, unsecured lending like personal loans, medical loans, and home renovation financing. But this year, it entered its largest market yet: automotive finance. Almost $1 trillion worth of cars are sold each year in the U.S., with many of them financed, and capturing a piece of that market will be a significant growth driver.

Upstart's progress was supercharged by the acquisition of a company called Prodigy back in April. Prodigy develops sales software for car dealerships, and it was used to sell $1 billion worth of vehicles in the recent second quarter. Upstart's intention is to integrate its AI lending technology with Prodigy to build an all-in-one car sales and financing software -- and in September, it completed that project.

The new combined platform is officially dubbed Upstart Auto Retail, and it's expected to roll out to all of the company's dealership partners in early 2022, including 33 of the top brands that already use the original Prodigy sales software.

The dealership network is the most crucial mechanism for vehicle loan originations because it's where consumers make their purchases. As of the recent second quarter, Upstart had already doubled its dealership footprint and revealed it had five bank partners signed on for vehicle lending.

Originations are important because Upstart earns fees based on how much lending it drives to its banking partners.

The $4.5 billion in total originations in the first half of this year is already more than the $3.4 billion it generated for the whole of 2020.

Analysts have begun making estimates about Upstart's revenue in 2022, and the consensus suggests more than $1 billion should flow into the company for the first time in its history. That would represent a whopping 359% increase over 2020.

But Upstart is unique because it's already profitable, which sets it apart from most tech companies, which usually take years after listing on the stock exchange to generate earnings for investors.

But Upstart has crushed expectations time and again over the last two years, and with its fast-tracked automotive opportunity, analyst estimates might even be too low. After all, despite the high valuation, not a single major Wall Street firm has a sell rating on the stock.