It has lagged the market over the last five years but with a promising gene therapy, is Sarepta worth another look?

Affecting one in 3,000 to 5,000 males worldwide, Duchenne muscular dystrophy (DMD) causes progressively worsening muscle weakness that eventually requires a wheelchair for most patients by age 11. Even worse, heart and lung complications often lead to mortality before age 30. Fortunately, Sarepta Therapeutics (SRPT -2.77%) has three approved RNAi therapies that can treat approximately 30% of the DMD population, and it's working on potentially curative gene therapies.

In the second quarter, the rare disease biotech raised full-year revenue guidance to between $565 million and $575 million, up from a prior range of $537 million to $547 million. Even more impressive than those 25% year-over-year revenue gains is its growth streak. After Sarepta's preliminary announcement of third-quarter results last week, the upcoming earnings report will mark an enviable 20th consecutive quarter of revenue growth. 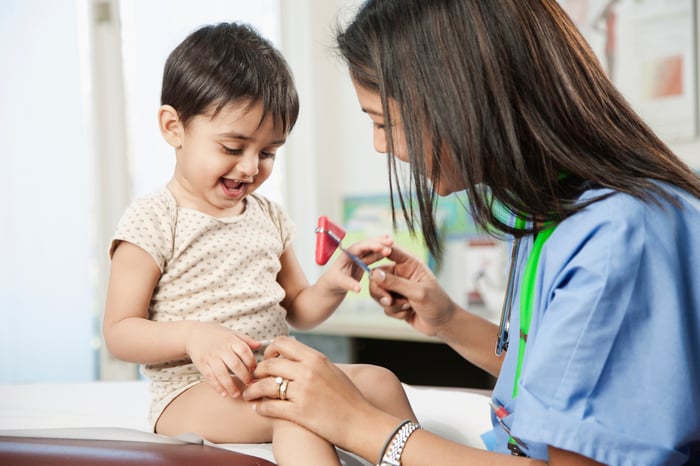 And the company does not seem like it's going to have decreasing sales anytime soon. Sarepta currently has three approved DMD drugs known as Exondys 51, Vyondys 53, and Amondys 45. Each of the three drugs treats a specific subset of DMD patients and has a 90% or greater rate of patient adherence. Plus, revenue continues to rise without a single price increase to any of the three drugs, each priced at $300,000 a year. Given the lack of price hikes since hitting the market, this potentially represents low-hanging fruit for the company should it want to pull that lever in the future.

A star in the pipeline?

The $6.8 billion rare disease company currently has over 40 programs in development, eight of which are in clinical trials. Six of these eight trials are gene therapies focused on rare neuromuscular diseases such as DMD. However, all eyes are on Sarepta's lead gene therapy program. The Roche-partnered treatment for DMD, SRP-9001, is entering a double-blind phase 3 clinical trial with results likely due at the end of 2022. The mega-pharma has exclusive rights to launch and commercialize SRP-9001 outside the U.S., leaving the U.S. market all to Sarepta. That's an opportunity that could reach $800 million or more annually.

Unfortunately, gene therapy trials are quite expensive. So much so that despite having $1.6 billion in cash at the end of September, Sarepta just announced a $500 million offering of common stock to help defray the cost of future trials. That is a lot of dilution for shareholders, with potentially more to come.

Tackling curative gene therapy is an expensive risk for the neuromuscular disease fighter, as there are only approximately 350 to 400 males born with DMD in the U.S. each year. This risk is particularly odd as Sarepta's RNAi franchise is continuing to grow. Using Novartis' gene therapy Zolgensma and its $2.2 million price tag as a measuring stick, the DMD gene therapy market equates to roughly $800 million in the U.S. each year. What remains to be seen is if SRP-9001 can cannibalize the RNAi franchise, which is still growing and projected to rake in $565 million to $575 million in revenue in 2021.

Safety and efficacy concerns in the background

Sarepta's SRP-9001 gene therapy is delivered into the body using an adenovirus (AAV) based system, which has a checkered past. AAV gene therapy was the delivery system of Audentes Therapeutics (acquired by Astellas), which has been placed on a clinical hold after four deaths occurred. Even Novartis' Zolgensma has a black box warning after about a third of the 500 patients who received the drug since its approval experienced a liver-related adverse event.

Despite the warning, Novartis' AAV-based therapy still generated $319 million in Q2 sales. But investors should be aware that compared to traditional pharmaceutical companies, AAV therapies come with a higher than usual amount of uncertainty and risk. So it's a bit of a head-scratcher as to why Sarepta is willing to accept the financial risk of gene therapy trials at the risk of sacrificing most, if not all of its growing DMD RNAi franchise.

As if the delivery system concerns were not enough, a recent study found that SRP-9001 did not show significant functional improvement for DMD patients at 48 weeks. And while a subgroup analysis of patients ages 4 to 5 seemed to show improvement, this may call into question SRP-9001's development altogether. Sarepta blamed the lackluster results on an "imbalance in baseline functional characteristics in the 6 to 7-year-old group [which] contributed to the lack of statistical significance on the functional endpoint." Further studies should help clarify what, if any, utility SRP-9001 can provide patients in the future. But in the meantime, while searching for potentially curative gene therapy seems altruistic and admirable from the patient perspective, this seems like a risky financial proposition for the company.

How does Sarepta stack up against other rare disease companies?

A good reference point might be cystic fibrosis drug maker Vertex Pharmaceuticals (VRTX -4.06%) or even pulmonary hypertension fighter United Therapeutics (UTHR -1.50%). While Sarepta has three drugs on the market, Vertex has four and United Therapeutics has five -- and all three companies are currently in niche healthcare spaces.

In terms of growth, Sarepta just posted 25% year-over-year revenue growth for Q2, while Vertex saw revenue grow 18% year over year for Q2 and United Therapeutics enjoyed 23% growth for the quarter. While investors might expect a similar valuation based on this, United Therapeutics has a price-to-sales (P/S) ratio of 5.6 but Vertex has a P/S ratio of 6.4 -- and both are profitable companies. Sarepta, on the other hand, is nearly double the valuation at a P/S of 11.8 and is not yet profitable.

Although I can applaud Sarepta for tackling gene therapy in a rare disease at the expense of its RNAi golden goose, it doesn't mean I have to invest in it. Biotech investors should proceed with caution as Sarepta still looks undeservingly expensive and its path to profitability is unclear at the moment.

Why Sarepta Therapeutics Stock Is Perking Up Today
410%