Starbucks (SBUX 0.68%) made a huge rebound in its fiscal third quarter after a year of pandemic-pressured declines. That was a relief for investors, although the stock price has been climbing since the March 2020 crash, thanks to investors' general confidence in the company's ability to withstand the negative environment.

It came through with flying colors last earnings season, and management is expecting more greatness in the fiscal fourth quarter and next year. When that Q4 report arrives next week, the most important metric for investors to focus on -- the one that should give them the clearest insights about Starbucks' real progress -- will be U.S. comps growth.

Starbucks has become the world leader in coffee shops through its focus on beverage innovation and community gathering. It was operating nearly 33,000 stores as of June 27, the end of its fiscal third quarter, with plans to open a total of 1,100 new locations in 2021. 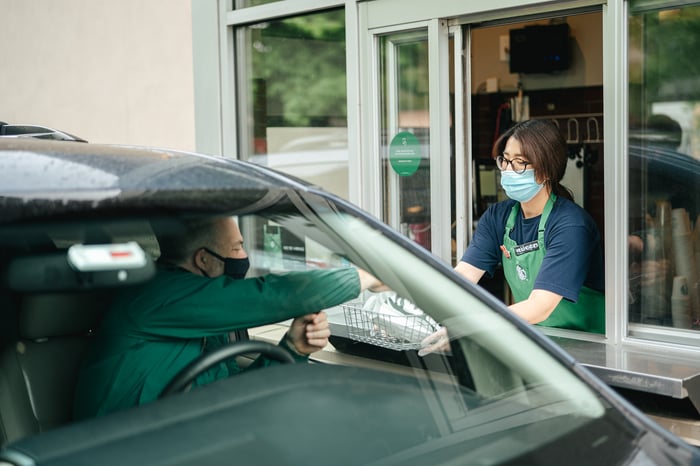 More than 18,000 of its stores are located in its Americas region, which includes the U.S. and Canada.

For the fiscal fourth quarter, Starbucks is expecting year-over-year comps growth in the 22% to 25% range for the Americas after a 9% decrease in the prior-year period. That would give it a two-year comps gain similar to the one it reported for fiscal Q3.

If Starbucks hits or beats its forecast comps increase, that will be a strong sign that a sustained recovery for its business is underway. If it misses, that could indicate there's some trouble brewing.

Another important point to make about Starbucks' Americas comps growth is that it provided the fuel that boosted the company's non-GAAP earnings per share to a record $1.01 in fiscal Q3. As Starbucks stores bring in more sales per store, they become highly profitable, putting lots of cash at the company's disposal to get more creative -- and also to boost its dividend.

China is Starbucks' second-biggest market -- the U.S. and China locations combined account for 62% of the company's total store count. Fiscal third-quarter comps in China increased by only 19%, but that region has been on a different pandemic timeline than most of the rest of the world. (China comps decreased 50% in Q2 2020, and they already demonstrated a dramatic recovery in the 2021 second quarter, increasing 91% year over year.) Comps only fell by 19% year over year there in fiscal 2020's third quarter.

Management is expecting China's comparable sales to be about flat in the fiscal fourth quarter, a slight improvement from their 3% decline last year. The company is opening stores rapidly across China, with the count surpassing 5,100 last quarter.

On the topic of the Chinese market, CEO Kevin Johnson said during the Q3 earnings call: "These are still early days and our strategies are clearly working." That will be something to keep an eye on.

Should you buy Starbucks stock before the earnings release?

Starbucks typically beats its own guidance, and if it does so again this time around, the stock price is likely to rise. However, considering the headwinds created by global supply chain issues and inflation, management may have some relevant news for investors. I'll be waiting to hear how these issues are affecting Starbucks' global network, but I'm most interested in hearing about U.S. comps.

Regardless, there are many reasons to be confident about Starbucks's future. It has excellent management, an innovation model, strong brand awareness, and growing profits. That combination makes the stock a long-term buy anytime.