Is growth at the social media company slowing faster than we had thought?

Pinterest (PINS -5.57%) shares popped Wednesday on news that the company is in talks with fintech giant PayPal (PYPL -1.66%) to be acquired for $70 a share.

Naturally, the stock reacted positively to the news, as Pinterest shares had closed Tuesday's trading below $56 a share. PayPal's purported offer price, according to the story first reported in Bloomberg, represented a 26% premium to where it closed on Tuesday.

This isn't the first time Pinterest has been pursued by a tech giant. Microsoft reportedly considered acquiring Pinterest for $51 billion earlier this year, and that's more than the $45 billion PayPal would shell out.

It's easy to see why the image-based discovery engine is getting so much attention from big tech. Pinterest is a unique property in social media, a high-growth industry with only a handful of major players. The platform is also just beginning to monetize itself as it attracts large advertisers and builds out its ad business in international markets. Even better, the product-driven nature of Pinterest means that users often want to see ads.

In fact, it's odd that such a promising growth stock would entertain an acquisition offer, especially one as low as $70 a share. While that buyout price may sound good compared to the social media stock's recent trading levels, it's considerably lower than where the stock was trading earlier this year. In fact, it's 22% below the peak it hit in August. That means that Pinterest would be selling itself on weakness, rather than strength. The stock stumbled after its second-quarter earnings report in July as domestic monthly active users surprisingly fell.

Perhaps management isn't as confident in the company's growth as it once was. 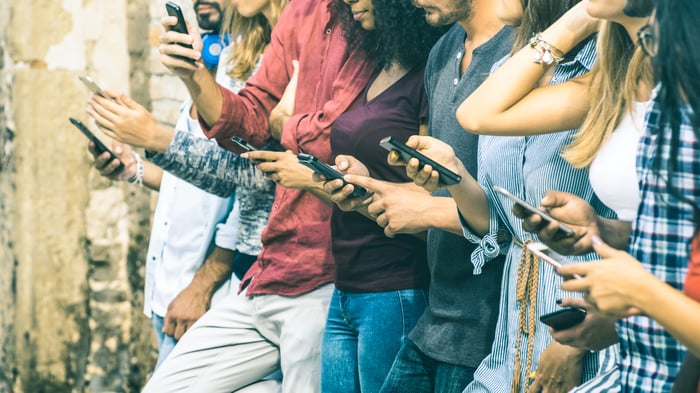 There's no question that Pinterest was a major beneficiary of the pandemic. Increased at-home time and the boredom of the lockdown era sparked a wave of interest in the digital bulletin board. Pinterest is a great tool if you're looking for new recipes, arts-and-crafts ideas, or creative ways to occupy your kids, and the pandemic era called for plenty of those types of use cases.

Once the reopening began, however, people who had been active on Pinterest returned to more normal social routines, abandoning the app. The company itself explained, "Since mid-March, however, we believe engagement on Pinterest was disproportionately lower as people began spending more time socializing with friends outside their homes, eating in restaurants, and generally participating in activities that are not our core use cases." Domestic MAUs declined from 98 million in the first quarter to 91 million in the second. That led to an 18% plunge in the stock the day after the report, and it's understandable that the market didn't like the user decline.

There are also some potential warning signs among the leadership ranks. Co-founder and Chief Design and Creative Officer Evan Sharp said he's leaving the company to work with Jony Ive, Apple's longtime design chief, and his creative collective, LoveFrom. That's not necessarily reflective of internal problems, but it's a bit unusual to see a founder leave a promising growth company and if Sharp knows the company is angling for a buyer, it makes sense for him to jump ship and grab a different opportunity he likes. Pinterest has also been dogged by a workplace discrimination lawsuit and accusations of racism and sexism. It may all be enough for CEO Ben Silbermann to throw in the towel and take the Paypal money.

Pinterest wouldn't be the first growth stock to get bought out on weakness or after an eye-popping rally. Whole Foods was an outperformer for years until sales suddenly slumped as other supermarket chains stepped up their organic offerings. The company sold itself to Amazon for $42 a share, a third less than its previous peak. Similarly, SodaStream is now a part of the Pepsico empire after an incredible turnaround that lifted the stock by more than 1,000%, and Livongo, a diabetes monitoring company, took a buyout from Teladoc last August after it surged during the pandemic.

Q3 could be a dud

At the very least, that Pinterest is discussing an acquisition is a sign that the company's third-quarter earnings report could be a stinker. Pinterest had already warned that revenue growth would slow to the low-40% range in Q3 after 125% growth in the second quarter. While 40% is still a strong clip, that forecast indicates that revenue would be up sequentially only in the low single digits, a weak pace for a growth stock. A sequential decline in revenue would be an even greater reason for concern and make a deal more in Pinterest's favor.

While one quarter's performance isn't enough to say this growth story's finished, investors should be prepared for a weak third-quarter earnings report. After all, if Pinterest could top the analyst consensus in its upcoming third-quarter report, the $70 offer price would likely be moot.