Wall Street predicts mergers and acquisitions, while Italy takes a step toward legalization.

Marijuana stocks are on fire Monday, as multiple Wall Street analysts update their valuations in the sector and news emerges from Italy concerning prospects for legalization in that country.

Here's a rundown of how some of the major marijuana names are faring as of 1:25 p.m. EDT: 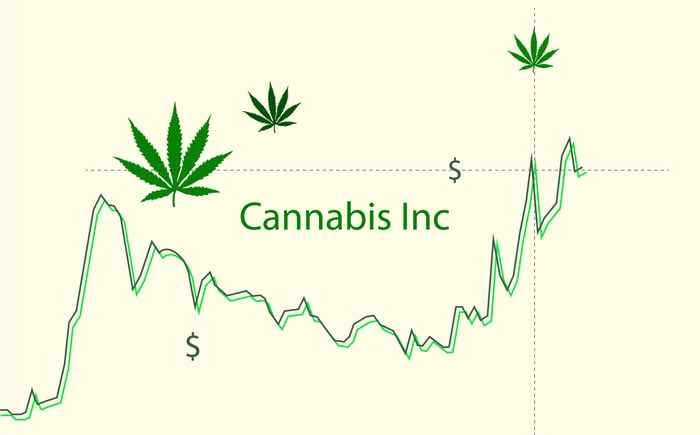 Let's begin with what analysts are saying. Two major reports came out today on the cannabis sector, with the one from Cantor Fitzgerald appearing to have the most impact.

The headline of this report is that Cantor downgraded shares of Tilray from overweight to hold (reports The Fly) -- and you'd think that would be bad news for Tilray stock, but instead it is up. Why? Tilray shares sell for only about $10.75 right now, but Cantor believes the stock is worth $11.80. So although the analyst is downgrading the stock, investors still see room for upside in the stock.

Moreover, that's not all Cantor said about cannabis. In the course of downgrading Tilray, the analyst took time to praise Canopy Growth stock for being ahead of Tilray in rolling out U.S. operations -- and said Canopy has a stronger balance sheet to boot.

It's no great surprise that Canopy Growth stock is responding positively to these comments. Cantor also voiced the theory that mergers and acquisitions within the marijuana industry will "be the main driver of that growth trajectory for" Tilray. This offhand comment may have investors scouting about for other marijuana stocks that the company might merge with -- bidding them up ahead of time.

Speaking of other marijuana stocks, about the only cannabis stock that's having a bad day today is Hexo. And that's because, alone among the cannabis stocks, Hexo just got hammered with a steep reduction in price target (to 2 Canadian dollars -- or about $1.62 U.S.) by Canaccord Genuity. If Canaccord is right about that one, then Hexo stock is close to fully priced at present, and accordingly has much less upside than the rest.

While analysts were busy pushing some marijuana stocks up, and others down in the U.S., over in Italy marijuana legalization activists just collected 630,000 signatures urging a referendum to legalize personal use cultivation of the drug, reports Marijuana Moment.

Granted, even if the proposal is eventually passed into law, marijuana possession and use would still be a noncriminal law violation punishable by a fine. Permitting cultivation but forbidding possession, however, would leave Italian antidrug laws looking rather nonsensical and perhaps open the path to a follow-on push to legalize possession and use of the drug as well.

Long story short, Italy is taking a step toward opening up a potential marijuana market of 60 million people. And that's good news for just about anybody investing in any marijuana stocks.