Shares of COVID-19 vaccine companies Moderna (MRNA -2.01%), Novavax (NVAX 2.82%), and Ocugen (OCGN 5.83%) have all posted wild price fluctuations through Thursday's closing bell this week, according to data from S&P Global Market Intelligence. Specifically, Moderna's stock has fallen by 18% through the first four trading sessions this week, while Novavax's shares have plunged nearly 27% over the same period.

Ocugen's stock, on the other hand, initially popped by a healthy 21.4% during Monday and Tuesday's combined trading sessions, before giving back all of these gains and then some over the next two days. As a result, this small-cap biotech stock has fallen by a noteworthy 6.4% so far this week as of Thursday's close. 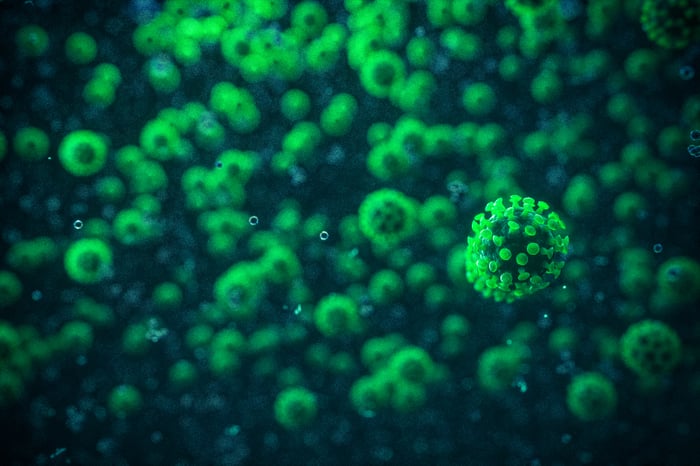 What's driving this extreme level of volatility among these three COVID-19 vaccine stocks? Yesterday, Moderna's third-quarter results badly missed the mark in terms of the biotech's revenue haul and earnings per share. More importantly, though, the company also drastically cut its annual revenue forecast for 2021. In its second-quarter earnings report, Moderna previously said that its COVID-19 vaccine sales should come in at around $20 billion for the year. The biotech revised this annual revenue forecast yesterday to between $15 billion to $18 billion.

Although Moderna blamed supply chain issues for this hefty downward revision, competition from Pfizer (PFE -1.04%) and BioNTech's rival vaccine Comirnaty probably played an important role as well. Underscoring this point, Pfizer announced during its own third-quarter earnings report last Tuesday that Comirnaty's U.S. market share has grown from 56% in April to about 74% as of Oct. 31. Comirnaty's share of the European market has also increased from 70% to approximately 80% during the same time period, according to Pfizer's Q3 report. Comirnaty, in short, is rapidly becoming the go-to vaccine in these key commercial territories.

Novavax's stock started to take flight last Monday in response to a trio of positive regulatory developments for its protein-based COVID-19 vaccine candidate,  NVX-CoV2373. The biotech's shares were in the midst of a downturn prior to Monday's upswing due to concerns about the company's ability to manufacture NVX-CoV2373 at scale. Those worries, however, quickly dissipated after NVX-CoV2373 was granted Emergency Use Authorization in Indonesia and the company announced that it had completed the vaccine's regulatory applications in both Canada and the European Union on Monday.

Ocugen, for its part, saw its shares initially heat up in anticipation of the World Health Organization's (WHO) decision for Covaxin's Emergency Use Listing (EUL) application this week. Ocugen co-owns Covaxin's North American commercial rights with India's Bharat Biotech. Immediately after the WHO granted the vaccine an EUL, however, Ocugen's shares hit the skids. While it would be easy to paint this downturn as a "sell the news" type event, the truth is probably more complex. Like Moderna, Ocugen's shares were likely hurt by Comirnaty's overwhelming commercial dominance in the United States. In short, it's not altogether clear how much of a market will be left by the time Covaxin gets a regulatory nod from the Food and Drug Administration (FDA), presumably in the second half of 2022.

Are any of these volatile COVID-19 vaccine stocks a screaming buy right now? Among the three, Novavax arguably stands out as the best buy. The company's novel coronavirus vaccine posted some of the highest levels of efficacy in clinical studies among the leaders in the space, it sports a more traditional protein-based vaccine product that ought to appeal to individuals hesitant about mRNA-based vaccines, and its shares are currently trading at less than three times 2022 projected sales.

Moderna, by contrast, will have to prove to investors that its coronavirus vaccine can effectively compete with Comirnaty in the most important commercial territories. Until then, the biotech's shares may have trouble regaining this lost ground.

Ocugen is a big question mark for investors at this point. Covaxin doesn't have to generate all that much revenue for it to be a major growth driver for the company. This simple fact is the key reason why its stock came off as a strong buy heading into this month. After Pfizer's Q3 update, though, Covaxin now appears like it could have a truly tough time in North America from a commercial standpoint. Comirnaty has earned a dominant share of this all-important market due to several key regulatory advantages, along with its high levels of efficacy against most forms of the novel coronavirus.