Bank of America's analyst -- and three others -- are growing more enthusiastic about the chipmaker.

Shares of semiconductor specialist Nvidia (NVDA -0.05%) were trading more than 2% higher as of 11:10 a.m. EST Thursday, lifted by a chorus of price target hikes from Wall Street analysts.

Over the past 48 hours, reports StreetInsider.com, no fewer than four institutions' analysts have chimed in with higher estimates of Nvidia's intrinsic value, ranging from $340 a share to $360 a share. And right now, Nvidia is only priced at about $301 a share. 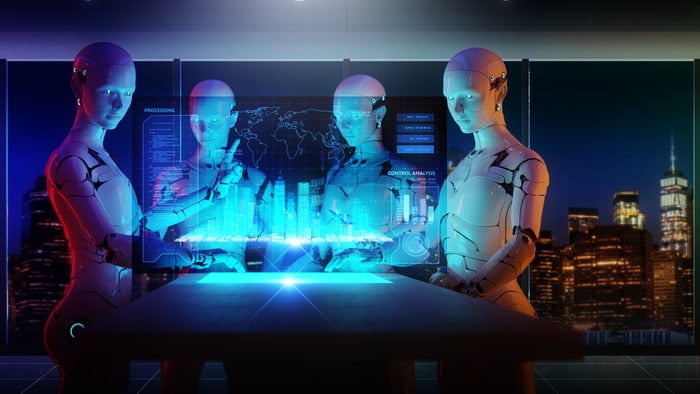 So what has Wall Street so excited about Nvidia's prospects? In a word, the future -- and all that entails.

For example, as Bank of America's Vivek Arya argues, Nvidia is "uniquely ready" to provide the hardware and software, and to support the developers needed to make advancements in artificial intelligence, robotics, autonomous vehicles, and even Mark Zuckerberg's promised metaverse. If you can name a technology, Bank of America thinks Nvidia can support "any new markets that materialize" in the future.

Perhaps the single thing that gets Arya most excited about Nvidia is the company's Omniverse project to build a platform to support the construction of an internet metaverse. By Arya's analysis, if Ominverse Enterprise manages a market penetration of just 5% by 2025, it will generate an extra $10 billion worth of revenue for Nvidia, and add $1.50 to the company's earnings per share.

Long term, therefore, the Bank of America analyst estimates that Nvidia has more than $10 per share in earnings power, and sees that metric growing at a compound annual rate of 32%. And if you value the stock on earnings, well, a $300 stock price, divided by $10 (or more) per share works out to only a 30 P/E ratio -- plenty cheap for a 32% growth rate.

Now all Nvidia has to do is prove Arya right about the $10 EPS figure to justify the stock's buy rating and price target.

Bank of America is an advertising partner of The Ascent, a Motley Fool company. Rich Smith has no position in any of the stocks mentioned. The Motley Fool owns shares of and recommends Nvidia. The Motley Fool has a disclosure policy.