Shares of uranium mining company Uranium Energy (NYSEMKT:UEC) were down by 11.5% as of 2 p.m. ET Friday.

There wasn't any stock-specific news behind the drop. On the contrary, it was the absence of news that was the problem. 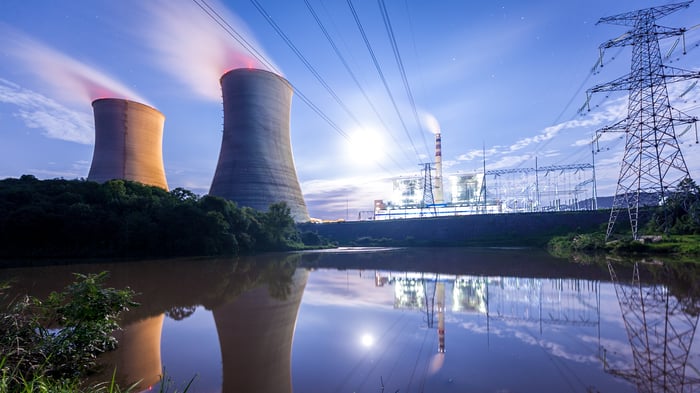 By now, you may be familiar with the story: Uranium miners are in the hunt for $60-a-pound uranium as investors bet that the worldwide transition toward energy sources that don't contribute to global warming will inevitably lead to greater demand for nuclear fuel. That's also the price at which, according to MiningReview.com, mining companies will consider it worthwhile and profitable to bring new production online.

Problem is, whenever uranium prices have started moving in the "right" direction over the past few months, they've stalled out and fallen back down again.

And even worse than that for investors, uranium's highs keep getting lower.

As TradingEconomics.com data show, uranium prices peaked near $51 a pound in mid-September. After dropping back, they then ran up again in mid-October -- but only to about $49 a pound. Another decline in prices followed. Then came uranium's latest run-up -- which peaked at about $48 four days ago. Prices have been stuck there ever since.

Now, investors have to be wondering whether this week's plateau is the precursor to another upward move toward $60 -- or whether uranium prices have actually peaked again at a level lower than the previous peak. Because if it's Door No. 2, then in all likelihood, uranium prices are set to fall for a while.

If you ask me, that's why investors are bailing out of Uranium Energy shares Friday -- but these conditions just go with the territory when it comes to cyclical stocks.