Gold has long been regarded as the go-to inflation hedge. But the world is much different now. Today, we have cryptocurrencies that have inflation-resistant characteristics. Bitcoin, the largest and most established of them all, has the makings of an excellent hedge that's arguably better than gold. Here's why. 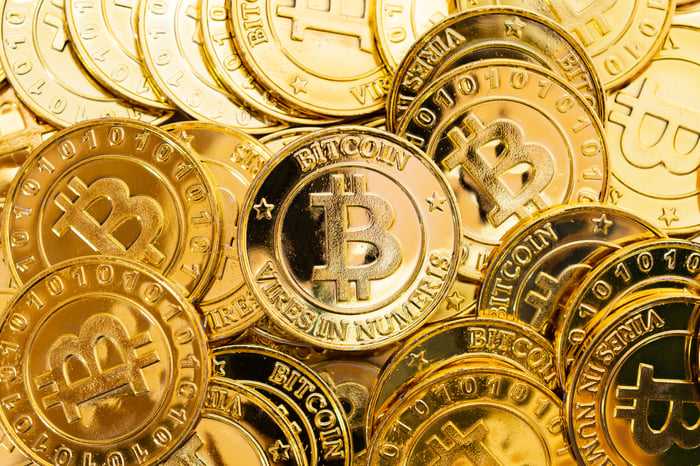 The CPI contains a basket meant to reflect purchases made by an average consumer, such as food, energy, and other goods and services. Over the last two months, prices for items other than food and energy rose 4.6%, food rose 5.3%, and energy rose a whopping 30%.

Prices are rising for a combination of reasons -- namely low interest rates, economic stimulus, higher government spending, and pent-up demand for goods and services as a direct result of the COVID-19 pandemic.

U.S. inflation of 6.2% simply means that a dollar today, in theory, is worth an average of 6.2% less than it was a year ago. The exact amount will vary based on what a dollar is buying. For example, used cars and bacon are both up over 20% compared to a year ago, whereas some goods and services have increased less than a few percentage points.

1. Bitcoin isn't tied to one currency or economy

Similar to gold, Bitcoin isn't tied to a particular currency or economy. It also isn't controlled by a small group of companies or stakeholders. Rather, it is an international asset class that reflects global demand.

In times of high U.S. inflation, investors must take on more risk to offset the decline in existing asset values. For example, a 3% dividend yield may normally supplement income in retirement. But if inflation is 6%, it simply isn't good enough.

Similarly, the average long-term return of the S&P 500 is somewhere around 7% to 8% per year, which is barely higher than the current inflation rate. That being said, the S&P 500 has returned a lot more than its average over the last decade. The downside of these high returns is that valuations are now much higher than in years past. If investors want to get a return of more than 6%, there are few viable options outside of investing in U.S. stocks -- even at higher valuations. However, in the long run, the U.S. stock market arguably offers the best risk/reward profile out there.

Bitcoin could be one of the better options outside of equities because it sidesteps many of the political and economic risks associated with the U.S. stock market. In this vein, Bitcoin and other cryptocurrencies are one of the most practical and simple ways for an American to diversify away from purely American revenue, income, and assets.

2. Bitcoin has a limited supply

One of the best reasons why Bitcoin is a better inflation hedge than other cryptocurrencies is due to its fixed supply of 21 million coins, nearly 19 million of which have already been mined. An ironclad fixed supply means that new coins can't enter circulation, so there's no risk of inflation. By contrast, a country like the U.S. can just increase the money supply through spending and buying government bonds to lower interest rates, reduce the spending power of a dollar, and inadvertently cause inflation.

3. Bitcoin is an easily transferable store of value

Like gold, Bitcoin is durable, easily interchangeable, secure, and scarce. But unlike gold, Bitcoin is also portable, transferable, and arguably more decentralized. Gold supply is mostly controlled by sovereign nations like the U.S., China, Germany, and other European countries. Theoretically, anyone in the world can store and easily protect their Bitcoin much easier than gold.

Gold bugs could argue that gold has intrinsic value as a precious metal and Bitcoin is just a fake currency. However, Bitcoin's blockchain technology has practical use cases. As a currency, Bitcoin has limited practical use cases in developed nations with relatively stale fiat currencies of their own. But Bitcoin provides a better means of exchange in countries prone to hyperinflation and political turmoil.

Should you buy Bitcoin now?

Not only is Bitcoin a great hedge against inflation, it also has long-term growth prospects that far outweigh gold. However, Bitcoin is also way more volatile than gold, which may dissuade risk-averse investors from touching the asset altogether.

If you're looking for a recession-resistant investment that can combat inflation and has long-term growth potential, Bitcoin is probably the best option out there. Although Bitcoin is hovering around an all-time high, its use cases and adoption should only increase from here. Its limited supply paired with steadily increasing demand should continue to drive the price higher. However, investors who want to avoid Bitcoin's volatility (which can be pretty obnoxious) could choose gold or high-yield stablecoins instead.