This mix of income and value can insulate your portfolio from inflation.

There are lots of stories circulating the markets right now. The booming of electric-vehicle stocks like Rivian and volatile crypto markets are two that stick out. However, the most pervasive story affecting all investors is rising inflation.

On Nov. 10, the U.S. Bureau of Labor Statistics reported that the Consumer Price Index is up 6.2% over the last 12 months. Supply-chain issues, higher raw material costs, and seven-year-high oil and gas prices are just a few of the reasons why inflation is at a 30-year high. Rising prices affect nearly every sector of the economy, as companies are pressured to either soak up added costs or pass those costs along to their customers through price hikes. 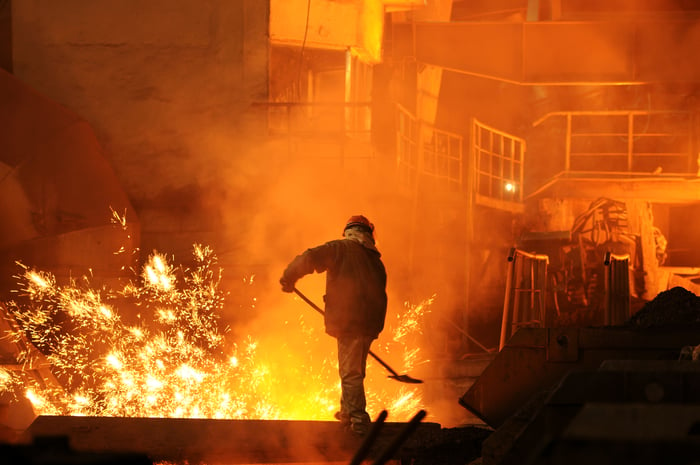 Enjoy golden slumbers while inflation causes others to lose sleep

Scott Levine (Franco-Nevada): You don't have to be the savviest of investors to know that buying gold is a long-practiced strategy for safeguarding against economic uncertainty. What's less well-known, however, is that gaining exposure to the yellow metal transcends pawning those gold necklaces pushed to the back of the jewelry drawer or visiting the local coin gallery to buy bullion. In fact, your gold investment choices extend beyond the companies that dig it out of the ground.

Okay, you're thinking, so it's a different type of gold stock, but it still depends on the price of gold to rise, right? Wrong.

The company's operating model means that it will certainly benefit from a rise in the price of the yellow stuff, but it's not a zero-sum game -- the price of gold can fall and the company can still prosper. Take last quarter for example.

Lee Samaha (Freeport-McMoRan): The logic is simple: If one of the reasons inflation is rising comes down to increasing raw material prices, then it makes sense to buy stocks that directly benefit from them. Therefore, it makes sense to start looking at the most economically sensitive commodities, which usually means copper.

Copper is used across construction, electrical networks, industrial machinery, transportation, and consumer products -- you name it. So when the economy picks up, there's increased demand for copper. That's how investors have traditionally looked at the metal.

However, the reality is that copper will receive a long-term demand pull from its use in emerging technologies such as electric vehicles -- they require up to four times more copper than internal-combustion engines. In addition, copper is used in renewable energy (installations, transmission, and distribution networks), and a host of other technologies are tied to electrification trends.

Meanwhile, Freeport-McMoRan's management believes that supply conditions will remain tight in the industry on the whole, even as the miner is in the process of expanding its sites after a period of investment.

There's no guarantee that copper prices will continue to soar, and there's no shortage of copper reserves in the world (getting permits and setting up sites is the issue). However, if you're worried about inflation, then buying Freeport-McMoRan will provide a useful way to profit from rising prices.

Moreover, given copper's importance in the energy transition, it's a pretty good bet that demand will rise in the coming decades. All of this makes Freeport-McMoRan an attractive stock for investors.

This dividend stock can protect you from cracks in the economy

Daniel Foelber (Chevron): As Lee said, a simple way to combat inflation is to find the companies that are causing it in the first place. Aside from higher raw material costs used in industrial production, one of the main contributors to rising U.S. inflation is energy costs.

Energy is the best-performing sector so far this year, but you wouldn't know it from glancing at the S&P 500 because the sector makes up less than 3% of the index. Even the mightiest energy giants -- ExxonMobil and Chevron -- are worth less than software companies like Adobe or Salesforce.

While there's a lot of value if you know where to look, it's worth mentioning that the energy sector is chock-full of risky companies with overly leveraged balance sheets, prone to booms and busts. Right now, many of those names are booming, but it's best to stick to the select few that can sustain positive free cash flow in good times and bad.

Chevron isn't just an attractive pick due to its size and diversified business that spans the integrated oil and gas value chain. It also stands out because it has a very efficient portfolio and is arguably the leanest of the oil majors.

Put another way, Chevron can get a good return on the oil and gas it produces, transports, and refines without spending as much money as its competitors. This is due, in part, to a heavy amount of spending that began tapering off after the crash of 2014 and 2015.

But it's also because the company has made good investments in attractive plays that can generate a return even at lower oil and gas prices. It also hasn't shied away from leaning into moments of weakness in the market -- most notably, by purchasing Noble Energy's Permian Basin assets on the cheap during the height of the 2020 downturn.

Not only is Chevron "the company" resistant to inflationary pressures, but shareholders also receive a 4.6% dividend yield. That's nearly enough on its own to offset the current year-over-year inflation rate of 6.2%.