There's a common expression in the investing community, which goes as follows: "It's a market of stocks, not a stock market." This essentially means that even with the financial markets at or near all-time highs as they are now, not all stocks have fared well.

Pharma stock Amgen (NASDAQ:AMGN) is a perfect example. At its current share price of $204, the stock is just a touch above its 52-week low and a whopping 26% below its 52-week high. Let's look at whether you should interpret this recent poor stock performance as a buying opportunity or a sign to steer clear of Amgen. 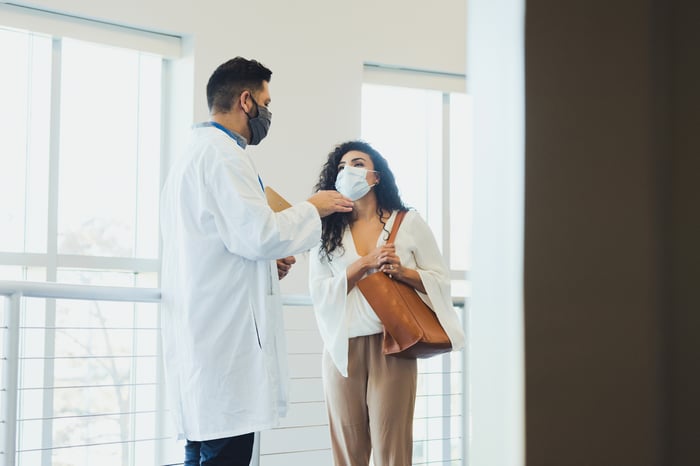 Amgen reported $6.7 billion in revenue during the third quarter, which equates to a 4.4% growth rate against the year-ago period. What led to Amgen's respectable performance?

Given Amgen's diversified portfolio of more than two dozen drugs, there were quite a few moving parts affecting growth in the quarter. Legacy medications such as Enbrel (for arthritis) and Neulasta (to help chemotherapy patients) experienced revenue declines. Combined sales of these two drugs fell 9.4% year over year to $1.7 billion in the third quarter due to a 2% volume decline for Enbrel and a 38% price drop for Neulasta.

But growth from Amgen's two osteoporosis drugs, Prolia and Evenity, and its psoriasis drug Otezla were enough to more than offset revenue declines from Enbrel and Neulasta. The three drugs combined to generate $1.6 billion in revenue during the third quarter, up 20.3% compared to the prior-year period.

Also of help were increased patient visits and diagnosis rates for the conditions that Amgen's drugs treat. As a result, the company saw its total product portfolio volume grow by 8%. This more than made up for the 7% drop in net selling price across all of the company's products caused by such drugs as Neulasta.

So what did this all mean for profits in the quarter? Good things. Amgen's non-GAAP net income increased 8% year over year to $2.7 billion. This was the result of higher revenue and disciplined cost management, leading to a 130-basis point increase in the company's non-GAAP net profit margin. All this, along with a 3.2% reduction in the outstanding share count due to buybacks, led non-GAAP earnings per share (EPS) 11.5% higher year over year to $4.67 in the third quarter, beating analysts' average forecast of $4.22.

Due to Amgen's 20-plus compounds in phase 2 or 3 clinical trials and the launch of a potential mega-blockbuster cancer drug in the third quarter -- Lumakras -- analysts are expecting 6% annual earnings growth over the next five years.

Amgen's balanced drug portfolio and pipeline give it decent growth prospects. But another factor that's important to assess is the strength (or lack thereof) of a company's balance sheet. Let's turn to one helpful measure: the ratio of a company's net debt to its EBITDA (earnings before interest, taxes, depreciation, and amortization).

Amgen has net debt of $24.7 billion ($37.6 billion in long-term debt minus $12.9 billion in cash and marketable securities). If we annualize the company's EBITDA based on the first three quarters, it comes to $10.6 billion. This gives Amgen a net debt-to-EBITDA ratio of 2.3, which means that the company could hypothetically repay its debt in just over two years.

It's worth noting that since Amgen will likely continue to pay a dividend to shareholders and must pay income taxes, the company probably couldn't pay down its debt that quickly. However, the net debt-to-EBITDA ratio does demonstrate that Amgen maintains a manageable debt load for a company of its size.

Amgen is a buy near its 52-week low

Amgen appears to be a fundamentally strong business and yet the stock is down sharply in recent months. What gives?

It may have more to do with investor concerns about the pharmaceuticals industry right now, particularly the prescription-drug pricing plan the U.S. Congress is considering in its Build Back Better bill. The S&P Pharmaceuticals ETF, which includes similar companies such as Johnson & Johnson and Bristol Myers Squibb, is off about 15% from its 52-week high.

But is that investor concern now built into the stock price? I think it is. Amgen appears to be reasonably valued, trading in line with the industry's average forward P/E ratio of about 11. Yet the company is arguably of higher-quality than the average general drug manufacturer.

Patient investors can collect a market-beating and safe 3.5% dividend yield from Amgen while they wait for the market to come to its senses on the stock.