Biopharmaceutical stocks are slated to end the year on a sour note. Apart from top COVID-19 vaccine players like Pfizer, Moderna, and Novavax, investors have shown little to no interest in owning these growth-oriented equities in 2021. As proof, the SPDR S&P Biotech ETF has lost a monstrous 17% of its value this year. This industrywide sell-off has also picked up momentum during the waning days of Nov., with an eye-popping 358 biopharma stocks falling by more than 10% during just the past three weeks.

Savvy investors, though, know that steep drops in the market typically represent compelling buying opportunities. Which biopharma stocks are the most attractive buys during this industrywide fire sale? Although there are literally dozens upon dozens of intriguing candidates, Affimed (NASDAQ:AFMD), Amgen (NASDAQ:AMGN), and Bristol Myers Squibb (NYSE:BMY) come across as the absolute best buys right now. Here's why. 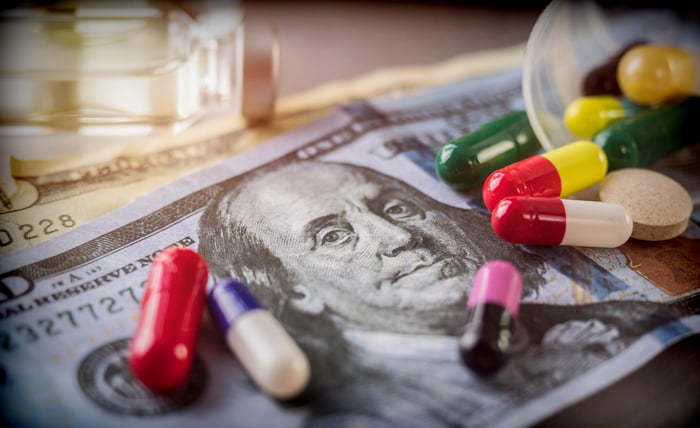 Affimed: A small-cap biotech with room to run

Bucking the downward trend in biopharma in 2021, Affimed, a small-cap cancer immunotherapy company, has seen its shares actually rise by a healthy 19.8% this year. This tiny immunotherapy company has been able to swim against the current this year due to some truly eye-catching clinical trial data.

Last week, Affimed reported that its lead product candidate AFM13, when combined with a dose of natural killer cells, produced a 100% objective response rate in heavily pre-treated patients with recurrent or refractory CD30-positive lymphomas. AFM13 is thus on track to become the go-to therapy for later-line CD30-positive lymphomas; an indication that ought to be worth around $500 million to $600 million in sales per year.

To put these extremely preliminary revenue figures into context, Affimed currently sports a market cap of just $834 million. That's the key reason why Wall Street thinks this stock could more than double in value over the next 12 months.

Despite its relatively strong year, Affimed's novel anti-cancer platform still comes off as grossly undervalued at these levels. The company could eventually generate billions in sales and it stands out as a top buyout target right now.

Amgen's shares have shed 12.5% of their value so far this year and are currently trading close to their 52-week low. Investors have fled this top biotech stock in 2021 due to pricing pressure issues, increasing biosimilar competition for legacy medicines such as Neulasta, and the underwhelming sales performance of some newer drugs like the migraine treatment Aimovig. Despite these headwinds, Amgen's core business is still performing well, with third-quarter sales rising by 4% relative to the same period a year ago. Moreover, the biotech recently boosted its already hefty dividend yield by another 10%, thanks to its strong free cash flows.

In addition, Amgen's novel cancer medication Lumakras has gotten off to an exceptionally strong start from a commercial standpoint, lending credence to the notion that this therapy might morph into the company's next flagship product. The biotech may also land its next mega-blockbuster medication soon with the severe asthma treatment tezepelumab, which is being co-developed with AstraZeneca. The Food and Drug Administration (FDA) is scheduled to make a decision on tezepelumab next January. Lastly, Amgen's psoriasis medication Otezla has been gobbling up market share in recent quarters. The biotech's long-term outlook thus appears to be on solid ground.

All things considered, Amgen's stock is arguably an outstanding bargain right now, especially with its shares trading at under four times 2022 projected sales.

Like Amgen, Bristol's stock is also bumping up against its 52-week low right now. The pharma giant's shares have struggled this year as a result of multiple headwinds. Specifically, Bristol is facing key patent expires later on in the decade, its top-selling cancer drug Opdivo is no longer generating blistering levels of sales growth, and the FDA recently issued a 3-month extension for its review of the biopharma's experimental heart drug mavacamten. The net result is that the company's shares are presently trading at approximately 2.6 times 2022 estimated sales, which is one of the lowest valuations among big pharma stocks in general.

Bristol, though, should be fine long-term. After all, the company has made no secret about its desire to buy additional revenue via one or more bolt-on acquisitions, it has been able to bring a handful of important new medications to market recently, and it sports one of the best clinical pipelines in the industry. The palpable fear over Bristol's future, therefore, appears to be overblown. Bargain hunters, in turn, shouldn't hesitate to snap up this top big pharma stock at these rock bottom prices.