Ford Motor Company (NYSE:F) said that it sold more vehicles in the U.S. than any other automaker for the third month in a row in November, as it continued to reap the benefits of improved supplies of semiconductors and other key components.

Ford said it was "the only major U.S. automaker" to report a year-over-year sales increase in November, a phrase that was clearly aimed at old rival General Motors (NYSE:GM) while carefully excluding fast-growing Tesla.

What Ford said about its November U.S. sales 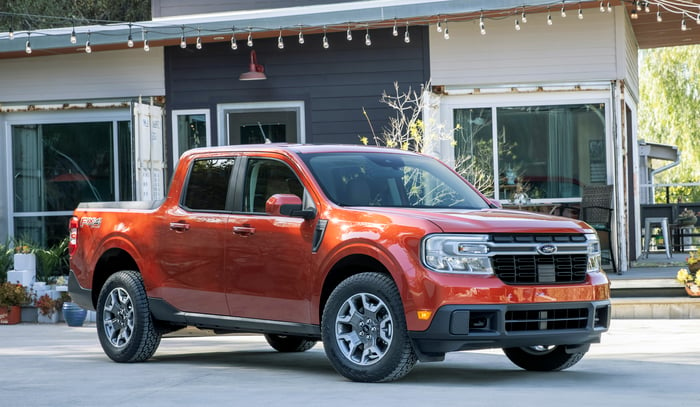 Sales numbers are still small as Ford ramps up production, but the little Maverick pickup is looking like another hit for the Blue Oval. Image source: Ford Motor Company.

First, while some other automakers, including Toyota (NYSE:TM), continue to struggle with supplies of chips and other components, Ford's third strong month in a row suggests that the Blue Oval is through the worst of its own supply chain issues. That's clearly good news, at least in the short term: With relatively strong dealer inventories, Ford is well positioned to continue taking market share from rivals over the next few months.

Second, Ford's latest models are all looking like bona fide hits. As veteran auto investors know, automakers' profits (and generally, their stock prices) benefit when their latest products are in particularly high demand.

Taken together, Ford appears to be putting together a very nice fourth quarter.