Electric vehicle (EV) stocks have seen significant gains in recent months. With just four weeks to go before the year ends, let's take a closer look at stocks that have gained the most so far in 2021. We'll also discuss how the stocks may fare in the coming year, and beyond.

The EV stock that has gained the most so far in 2021 is... Lucid Group (NASDAQ:LCID). Lucid stock went public on July 26, but investors had an opportunity to invest in the company through a special purpose acquisition vehicle (SPAC), Churchill Capital Corp IV. Lucid announced its plan to merge with the SPAC in February. Even before the official announcement, Churchill Capital Corp IV stock surged in January on rumors of a possible merger with Lucid Group. 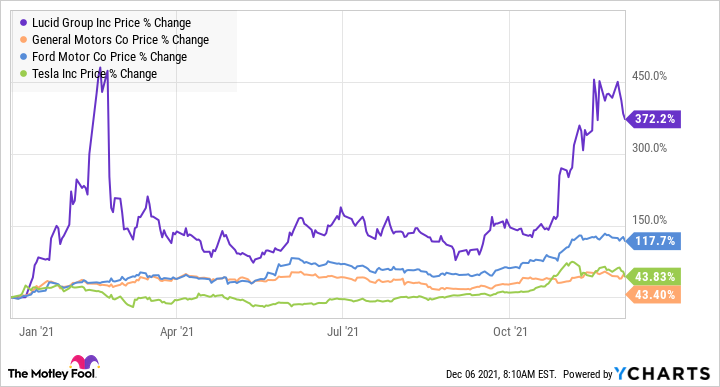 Interestingly, the stock tanked when the merger was officially announced in February. Not buying just on rumors, even if you would have bought Lucid stock any time after the January spike was settled, you would have done very well. The stock has risen 165% in just the last three months.

Looking forward, Lucid Group holds a lot of promise. The company's first car -- Lucid Air -- offers an unmatched range in EVs. It has won the 2022 MotorTrend Car of the Year award. Lucid already has reservations for more than 17,000 cars, and it plans to deliver roughly 20,000 cars in 2022. The stock may see some correction as investors book some profits or if the company fails to deliver on its plans. That could offer attractive entry points for investors looking to buy the stock for the long term.

With all the headlines talking about hot EV start-ups, it's easy to lose sight of legacy automakers with solid EV ambitions. The second top EV gainer in 2021 is Ford (NYSE:F). Ford's stock is up 118% so far in 2021. That should be enough to excite certain EV investors who may otherwise think of Ford as a boring legacy automaker. Ford intends to make at least 40% of its sales electric by 2030. 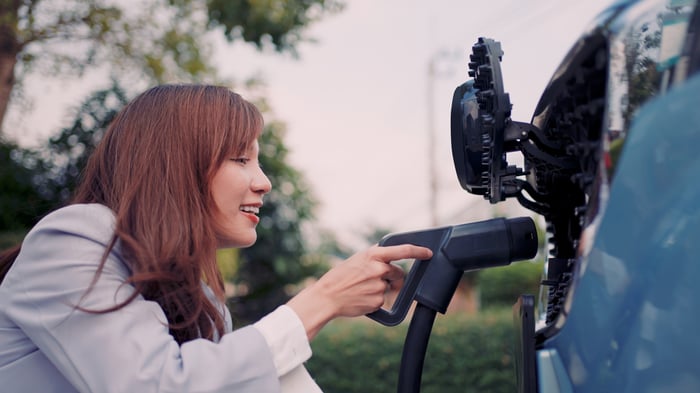 Ford plans to launch its electric pick-up truck, the F-150 Lightning, in spring 2022. Ford's F-series has been the top-selling truck in the U.S. for 44 straight years. It's not surprising that the company has received 160,000 pre-orders for the F-150 Lightning. Obviously, investors are excited about the company's growth potential from this model.

The company posted solid performance quarter after quarter in 2021. In the current quarter, the company's performance so far has also been impressive. All in all, there is a lot to like about Ford stock right now.

Tesla is the third top EV gainer, but that may change

As of this writing, Tesla (NASDAQ:TSLA) holds the third position as the top EV gainer this year. However, the pecking order may change by the end of the year. General Motors (NYSE:GM) stock is up 43.4%, close to Tesla's 43.8% rise. But Tesla stock's rise this year pales when compared to its 743% surge in 2020.

There are two key reasons for Tesla stock's relative underperformance (!) compared to its own history, as well as compared to Lucid or Ford. First, competition in the EV space is heating up. While Lucid is trying to challenge Tesla's dominance, traditional automakers like Ford are leaving no stone unturned to advance their EV strategies.

The second key reason is Tesla stock's exceptional rise in the last couple of years. It has reached a gigantic valuation, and investors will look forward to the next innovation from the EV pioneer for its stock to rise significantly from here on.

Overall, be prepared to see continued enthusiasm and action in the EV space in the coming year, and beyond.