Engine maker Cummins has had a very up-and-down year, which somewhat reflects the uncertainty surrounding its near-term business prospects. Investors need to know whether their investments deserve long-term loyalty, but they should also be aware of the most important potential actors on those investments over the coming months. With that in mind, let's take a look at three key things to watch in Cummins' future, both near-term and further out.

1. Are tanking truck orders a sign of trouble?
Cummins investors haven't yet seen the worst of a weak year for truck orders. Business Insider's recent list of "The Ugliest Charts in the World" includes one of North American heavy-duty truck orders, and it is indeed ugly. July's heavy-duty truck sales plunged to the lowest levels seen since 2010.

That's seen as a sign of lousy economic times ahead, but certainly very bad for Cummins right now, as it's one of the largest heavy-duty trucking engine manufacturers in North America. The company's year-over-year sales of heavy-duty trucks increased in the second quarter, and through the first half of the year heavy-duty engines were the company's greatest source of strength. August's heavy-duty order numbers bounced after BI's charts were published but remain lower than year-ago levels.

Cummins added Navistar to its customer list this year. It joins PACCAR as an important driver (pardon the pun) of Cummins' future revenues -- but Navistar's revenues have begun to fall, and PACCAR's tapered off this summer after an impressive multiyear rebound: 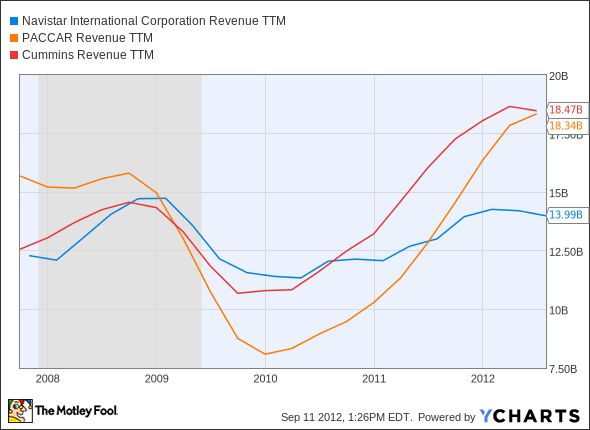 If this is what the first half looked like, the second half might be a bit ugly.

2. When will international sales rebound?
Cummins lost a lot of revenue from China in the second quarter. My fellow Fool Dan Carroll doesn't mince words, or numbers: "China in particular hurt the quarterly report, as the manufacturer lost 25% of Q2 revenue there compared to last year. Updated 2012 forecasts for Chinese revenue paint a grim picture: Cummins predicts sales in the country to drop 13% from 2011."

Cummins also points to Brazil's "weakening economy" and India's falling rupee as sources of near-term weakness. Industrial powerhouses and macroeconomic bellwethers Caterpillar and Deere are not immune to slowdowns, but their top lines at least continue to grow -- if less rapidly than before: 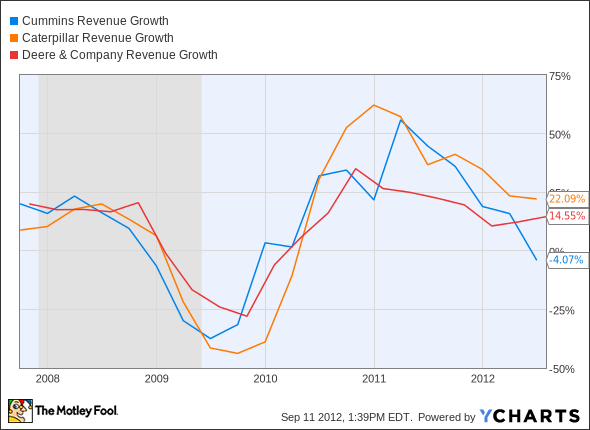 In contrast to Cummins, Caterpillar's enjoyed growth in in the Pacific region this past quarter. Cummins could use more infrastructure development in China to encourage sales of trucks bearing its engines. Caterpillar's machinery can help with that -- but there will be lag time between building new roads and creating new commerce for it. In the long term, Cummins will profit in China. In the short term, it's finding that there are limits to what Chinese roads need right now.

3. Will Cummins' nat-gas bet pay off?
Frequent Foolish readers should be well aware of Cummins' long-standing partnership with Westport Innovations , one of the few companies with effective natural-gas engine technology. The Cummins-Westport partnership shipped 1,972 engines in the second quarter. That's not bad, but Cummins itself shipped 148,800 engines in the same quarter, of which 33,000 were heavy-duty, the sort Cummins-Westport engines would replace.

Interest in cheaper fuel alternatives for heavy-duty trucking could help offset reduced orders in diesel-burning heavy-duty engines. At the moment, however, Westport and Clean Energy Fuels are in a bit of a the-chicken-or-the-egg predicament, with Cummins-Westport needing a larger nat-gas fueling infrastructure to really push the adoption of its engines, and Clean Energy needing more nat-gas engines on the road to make its build-out profitable. Westport isn't staying exclusive to Cummins, either -- it's partnered with Caterpillar for off-road nat-gas engines, among others.

At the moment, Cummins seems caught between a few trends. Economic rumbling has knocked it off-balance, but new technology might eventually help it recover. It may be in for some short-term turbulence, but Cummins has enough strength on its side to survive.

To follow Cummins' progress, it helps to pay attention to its key partners and competitors. If Caterpillar hits a rough patch, it's likely Cummins is in for pain as well. On the other hand, Clean Energy Fuels has to keep expanding for Cummins' nat-gas engines to thrive. You can keep an eye on both companies with The Motley Fool's premium research service. Just click on Caterpillar or Clean Energy Fuels to subscribe to a full year of regular updates.