These are the "facts" being reported on commercials, television stations, online outlets, and by political candidates, but I wonder how true they are? I'd think that maybe I'm an "energy voter" and if there is more than anecdotal evidence that regulation is having an effect on what we pay for electricity, natural gas, and oil, then it may swing my opinion.

When I think about these questions, I like to know the facts -- that's exactly what I've gone in search of today. There are a lot of factors that affect energy production, but if there are clear trends in production and/or pricing, then we should be able to draw some conclusions.

Is electricity more expensive?
The coal industry is in shambles because of regulation, or that's what some would like you to think. Coal is an abundant resource in the U.S. and I do not doubt that regulation has had an impact on the state of the industry.

Two months ago, when Patriot Coal was forced to file for bankruptcy I cited over 100 coal plant closures in the U.S. as one of the main reasons. Cliffs Natural Resources earnings fell 38% in the second quarter and the stock is down 43% over the past year. Arch Coal is in even worse shape, posting a $2.05 loss last quarter and seeing its stock decline 64% over the past year. So the struggles of coal companies must be making energy more expensive, right?

The answer is a definitive -- not really. The cost of electricity has risen every year since 2002, but the rate of growth has slowed in the last three years. There are a number of factors that go into the cost of electricity, including cost of fuel and demand from customers, but electricity demand is relatively stable. With most utilities in the U.S. operating in regulated areas the price per kW-hr could conceivably increase even if demand was down.

The problems for coal have largely been driven by another fossil fuel -- natural gas. Is regulation impacting electricity prices negatively? Maybe. But the evidence shows that price growth of electricity has slowed in recent years, not picked up.

It is absolutely clear by the chart below that production is up and prices, both residential and electrical, are down since the recession: 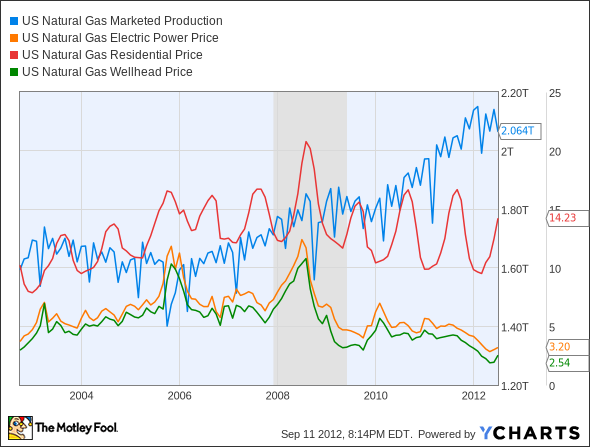 Companies like Chesapeake Energy and ExxonMobil have cited prices as the main reason they're slowing the production of natural gas. Regulation may play a role, but with prices dropping since their peak in 2008, it's no shock that the industry is starting to cut back.

Again, there is little evidence that regulation has caused a meaningful slowdown in production or an increase in price. In fact, the opposite appears to be true.

We do know that U.S. oil production is up since 2005 and that imports as a percentage of consumption have been falling since the same time. But, over the last three years, we can see that production in federal waters is down and the same can be said for production on federal land. 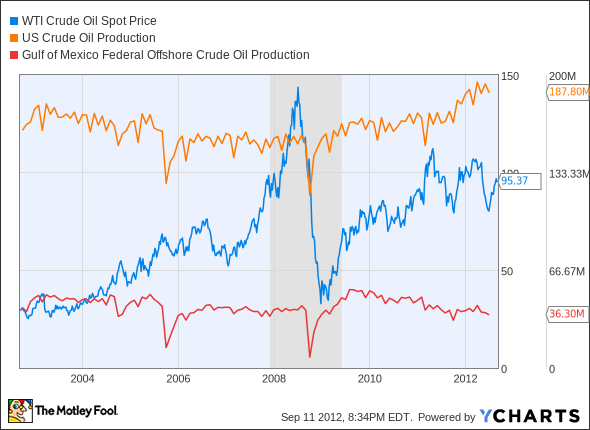 So, we know for sure that drilling is down on federal land and water. One reason for the decline in offshore production is likely the Deepwater Horizon disaster and resulting moratorium. Drillers have also had a hard time getting shallow water rigs back to work, and companies like rig owner Transocean have begun dumping their shallow water rigs. At the same time, ultra-deepwater drilling couldn't be stronger, which is something to keep in mind.

I will say that the reduction in drilling on federal land very well could be due to the government not issuing enough permits, but must point out that the amount of acres sought by the industry has also fallen over the same time. Could this be because the government wouldn't approve them anyway? It could be.

This is a hard correlation to draw because oil production is up dramatically in the U.S. over the last seven years, but it is up on private land like the Bakken Shale. If these private lands weren't so attractive to drillers and they were focused instead on public land, then would the number of permits granted be different? It's impossible to know.

I could make the argument that regulation and foot dragging at the federal level has held back oil production on federal land, but it doesn't appear to be holding back private development or production overall.

If you're a believer in American energy you should check out our report "The Only Energy Stock You'll Ever Need." It highlights a company that's well positioned for industry trends and the report is free when you click here.