Asbury Automotive Group (NYSE:ABG) announced its third-quarter results on Oct. 23. Here's what you need to know:

Revenue
The company had improvement in all same-store revenue segments during the third quarter:

Because of incentive pressure from manufacturers and inventory stabilization, used-vehicle sales were down in favor of increased new-vehicle sales. As a result, used-to-new sales were 72%, versus 87% the previous year.

EPS
After posting record-breaking EPS growth in the second quarter of this year, the company revealed another record-breaker, with 71% higher earnings per share ($0.72) than in the third quarter of 2011 ($0.42). This marks the fourth consecutive quarter of analyst-estimate-beating EPS results. 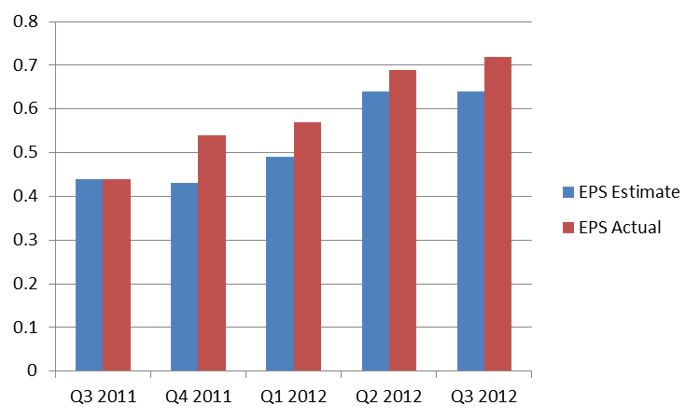 Margins
New vehicle margins were squeezed during the quarter because of manufacturer pressure on new-model turnover and increased inventory availability, when compared with Q3 2011. As a result, gross margin was down 80 basis points year over year (16.3%, versus 17.1% in 2011), even though gross profit had grown by 9%.

Operating margin was 4.1%, up 90 basis points from the prior-year quarter.

Other notable results
With cost-cutting efforts, Asbury reduced SG&A as a percentage of gross profit by 480 basis points to 72.3% for the quarter. As a result, Asbury has seen 80% flow-through of its incremental gross profit, demonstrating the company's improved operating efficiencies.

Asbury made efforts to strengthen its balance sheet further in Q3 2012, with the elimination of its remaining $15 million in convertible debt and the addition of $34 million in mortgages. The company's strategy to buy out leased properties will result in lower rental costs, improving its operating profit. Asbury ended Q3 2012 with a debt-to-adjusted EBITDA ratio of 2.5, an improvement from 3.2 in Q3 2011 .

The auto retailer has repurchased $6 million of its common stock in the past quarter, for a total of 637,000 shares bought back so far in 2012. The company's three-year plan included strategic repurchases of stock in the range of $25 million to $30 million per year.

Investor sentiment
The stock has a three-star rating on Motley Fool CAPS, with 100 of the 117 members rating it to outperform. Among All-Stars, the highest-rated CAPS participants, the stock is rated 30-to-1 to outperform.

According to Yahoo! Finance, six of 11 analysts recommend ABG as a buy, with four listing it as a "strong buy."

Outlook and takeaway
With consumers returning to showrooms across the country, dealer groups are expected to fare well going forward. The projected seasonally adjusted annualized rate for 2013 new-vehicle unit sales is 15 million to 15.5 million, a continued improvement from the recession low of 10.4 million in 2009.

Along with its leaner operations, increased customer traffic will allow Asbury to continue its trend of improvement. Look for revenue and gross profits to continue rising, consistent management of SG&A expenses, and expansion opportunities. The company's stock-repurchasing plan provides investors with added incentive to buy in and enjoy the ride.