Sometimes they don't save the best for last. As the final auto dealer to release its third-quarter earnings, Penske Automotive Group (NYSE:PAG) was expected to knock it out of the park – and it didn't. Though the company reported good stuff, numerous record-breaking statistics from the other public dealers left Penske's decent results in a dimmer light. Here's what you need to know.

Revenue
Like its compatriots, Penske reported revenue growth in all same-store retail segments, when compared with 2011:

But Penske's results don't stack up to its competitors'. For example, the other auto dealers reported record F&I revenue left and right in the third quarter of 2012, with an average growth of 20%-plus on a same-store basis, but Penske didn't.

Brand mix is at fault. Penske is largely focused on luxury brands, which regularly provide customers with complimentary maintenance and warranty packages. Since F&I sales are customer purchases of extended warranties, service contracts, and the like, it's difficult for luxury dealers to sell upgrades when complimentary options are comprehensive ... and free.

Margins
F&I income is pure profit; with those numbers down, Penske inevitably had to rely on vehicle margins to compensate for lost income. Unfortunately, manufacturers brought the hammer down on new vehicle margins during the third quarter, as they tussled over market share using competitive pricing.

Penske's gross margins weren't its only weak spot. The dealer's margins deteriorated across the board, suggesting that even if vehicle margins improved, any benefit would be lost as it flows toward the bottom line:

EPS
For the sixth consecutive quarter, Penske's EPS beat analyst estimates. Boosted by record adjusted income from continuing operations, EPS grew 20% from Q3 2011, ending at $0.60 per share. Penske's earnings are adjusted for $13 million in costs associated with a debt transaction. 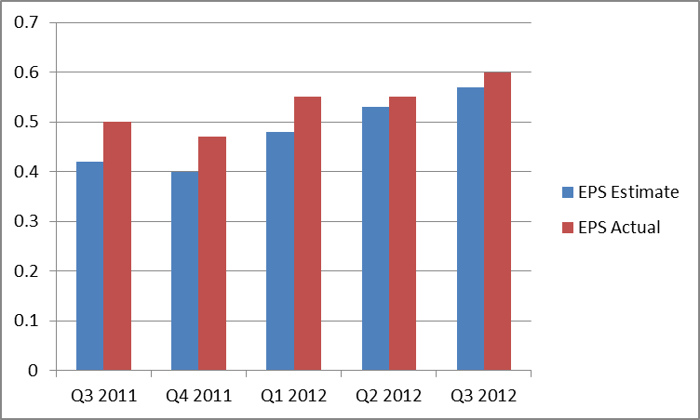 Earnings growth is the one area in which Penske measured up to the rest of the auto dealers, boding well for the company's ability to keep up going forward.

Other notable results
Penske was hit hard by Hurricane Sandy at five of its locations along the East Coast. Sandy's impact may be deeply felt in Penske's fourth-quarter results, with up to four days of disrupted operations at dealership locales representing 17% of the company's retail unit sales and revenue.

The company reduced SG&A expenses as a percentage of gross profit to 80.1% -- a markedly inferior result to its competitors'. One explanation: Penske's penchant for leasing its dealerships -- a distinction from the other dealers, which  prefer to own their real estate. But taking a closer look at the composition of all the dealers' SG&A expenses makes clear that Penske's leasing approach isn't the only reason it's at the bottom of the pack.

Sonic and Group 1 not only have a higher percentage of SG&A expenses dedicated to rent than Penske does, but they also have considerably lower SG&A expenses as a percentage of gross profit. Both companies enacted comprehensive cost-cutting initiatives during the auto industry's downturn; Penske hasn't detailed as great an initiative to do the same.

Penske fared rather well during the downturn because of its luxury vehicle sales, which were fairly consistent during the recession, so there may have been less pressure for the company to slash expenses. But as the industry rebounds, the companies that made concerted efforts to reduce costs are being rewarded with record-breaking earnings.

Investor sentiment
Penske has a three-star rating on Motley Fool CAPS, with a 118-19 rating of outperform by CAPS members. Based on All-Star CAPS members (the highest-rated CAPS participants), 38 of the 41 believe the stock will outperform.

Six of 13 analysts on Yahoo! Finance recommend Penske as a buy, with four listed as a "Strong Buy." The five analysts not recommending a buy say the stock is a hold.

Outlook
Historically, the fourth quarter is a boom-time for luxury-vehicle sales. With 68% of its brand mix in luxury/premium, Penske will capitalize on the holiday sales season, though margins may be under fire again from manufacturers' competitive pricing. Look for Penske's fourth-quarter results to dominate the auto-dealer segment.

Though its earnings may not signal a desperate need to reduce costs, Penske would benefit from a close inspection of its expenses. Any available cost-savings could turn the company's good operations into great ones during the industry rebound, allowing Penske to boast just as loud as its competitors about breaking records. It's not too late for the auto-dealer juggernaut to make adjustments necessary to blow other dealers away in 2013.