The automotive industry's rebound has everyone excited about earnings season. Investors were given a sneak peek of what was to come from the automakers during the public automotive dealer groups' earnings calls last week. Enter Group 1 Automotive (NYSE:GPI), which announced its third quarter results on Oct. 25.

Revenue
The company improved in all same-store retail revenue segments during the third quarter: 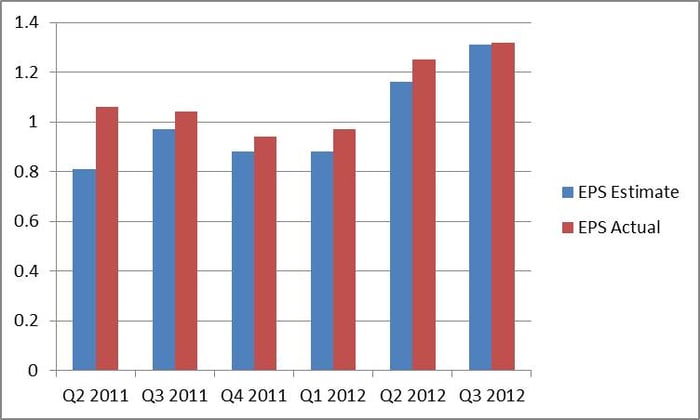 Margins
Much like Asbury Automotive Group's (NYSE:ABG) results a few days earlier, Group 1's new vehicle margins were squashed during Q3 2012 -- a trend all of the public dealer groups faced. Blame increased inventory availability from Toyota Motor (NYSE:TM) and Honda Motor (NYSE:HMC), as well as manufacturers pressing for increased (or sustained) market share. Those two factors are interrelated, warranting a bit of explanation:

After the tsunami in Japan last year, the decreased inventory availability of Japanese brands (J6) allowed other manufacturers to step in and capture some of the J6 market share. Since production is back up, the Japanese manufacturers are returning full-force to the market to regain the top spots. Let the pricing wars begin!

So, with manufacturers looking over its shoulder, a dealer is often forced to lower vehicle prices, without the benefit of reduced costs. As a result, the dealer sells more vehicles (generating more revenue), but per vehicle gross profit takes a hit. In essence, dealers trade gross margin for sales volume.

For Group 1, the result was a 90-basis point reduction in gross margin, while gross profit increased by 17.1% -- a company best. But GPI's margins get better as you move down the income statement, showing that the trade (margin for volume) isn't damaging to the company's overall performance.

Operating margin was flat with Q3 2011, at 3.4%, but a 2.5% net margin shows a 10-basis point improvement during the same time period. Its operations are lean enough that GPI can still improve its bottom line, even without the support of improving gross margins.

With its cost reductions, Group 1 has seen 48% of incremental gross profit flow-through to its bottom line. In human-speak, this means that for every additional dollar of gross profit generated by GPI, 48% "flows through" to the bottom line. The company's goal of 50% is a far cry from Asbury's actual results of 80%, indicating that GPI has plenty of room to improve.

Group 1 remains very bullish on expansions, and acquired two new dealerships in the third quarter. In total, the company has added 14 new franchises in 2012, which will provide approximately $580 million in annualized revenue to its operations.

Investor Sentiment
Group 1 has a two-star rating on Motley Fool CAPS, with a 96-39 rating of outperform by CAPS members. Based on All-Star CAPS members (highest rated CAPS participants), 41 of the 48 believe the stock will outperform.

Six of 11 analysts on Yahoo! Finance recommend GPI as a buy, with five listed as "Strong Buy." The five analysts not recommending a buy say the stock is a hold.

Outlook
The industry's projection of a 15 million – 15.5 million SAAR (seasonally adjusted annualized rate) for 2013 new vehicle unit sales is a continued improvement from the lowest SAAR (10.4 million) during the recession. With the increased vehicle sales volume, Group 1 and its competitors have an opening to continue improvements with operations, expansions and reinvestments -- providing added benefits to investors.

Look for Group 1 to take advantage of acquisition prospects, and additional cost-savings initiatives, as well as the increased inventory available from its Japanese brands. With these tools in hand, the company's revenue and gross profits should continue to rise, providing ample opportunity for investors to cash in on the expanding auto market.