Every investor can appreciate a stock that consistently beats the Street without getting ahead of its fundamentals and risking a meltdown. The best stocks offer sustainable market-beating gains, with improving financial metrics that support strong price growth. Let's take a look at what Level 3 Communications' (NYSE:LVLT) recent results tell us about its potential for future gains.

What the numbers tell you
The graphs you're about to see tell Level 3's story, and we'll be grading the quality of that story in several ways.

Growth is important on both top and bottom lines, and an improving profit margin is a great sign that a company's become more efficient over time. Since profits may not always reported at a steady rate, we'll also look at how much Level 3's free cash flow has grown in comparison to its net income.

A company that generates more earnings per share over time, regardless of the number of shares outstanding, is heading in the right direction. If Level 3's share price has kept pace with its earnings growth, that's another good sign that its stock can move higher.

Is Level 3 managing its resources well? A company's return on equity should be improving, and its debt-to-equity ratio declining, if it's to earn our approval.

By the numbers
Now, let's take a look at Level 3's key statistics: 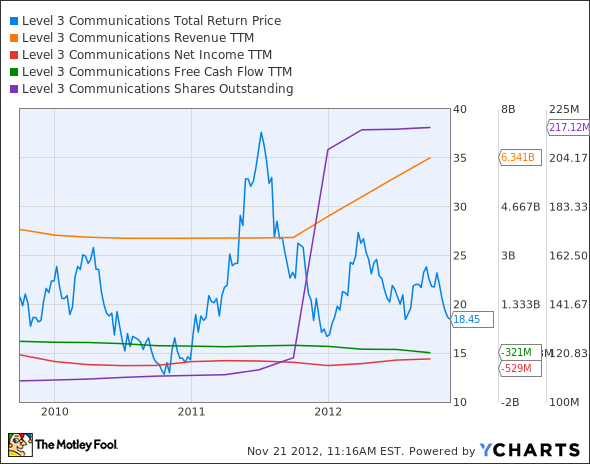 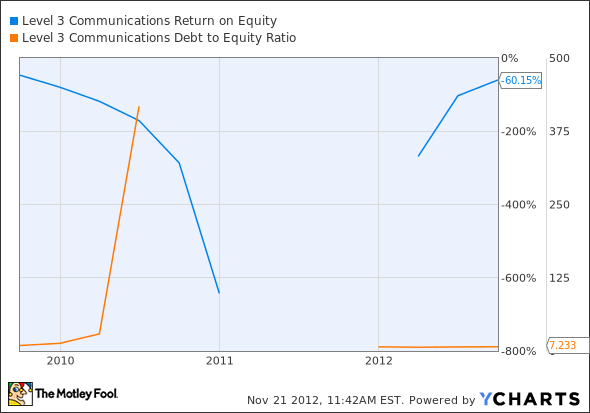 How we got here and where we're going
Five out of seven passing grades is surprisingly good, but Level 3's managed to push its EPS in the right direction since the start of the year -- even though it remains in negative territory. The company's withering free cash flow levels are a major red flag, however. Level 3 needs to put forth some consistent gains if it hopes to hold onto this score, or even improve it, next year.

For a while earlier this year, Level 3 looked like a winner, but the gains haven't lasted. Fellow Fool Anders Bylund has no expectations that Level 3 will rise again, as he called it "the worst of its breed" earlier this summer. He also pointed out the cash-flow concerns I raised earlier in this article. He points out that owning fiber assets means nothing if those assets can't be made profitable -- something that major networking rivals Verizon (NYSE: VZ) and AT&T (NYSE: T) both offer. Level 3 also holds a much higher level of debt relative to many important metrics than its networking peers.

Despite Level 3's history of unprofitability, analysts expect this long-suffering company to be profitable next year. Most of the rest of the market doesn't seem to be buying this optimism, as the company's latest earnings report sparked a sell-off, despite sequential improvement in EPS. It may be that the market's expecting this progress to reverse as Netflix (NASDAQ:NFLX) makes more use of its own in-house content delivery network. The streaming leader is such a major component of American bandwidth use that Level 3 and peers Akamai (NASDAQ:AKAM) and Limelight Networks (NASDAQ: LLNW) could lose significant revenue.

Akamai pulled ahead of its peers earlier this year when it put out the only positive earnings report of the trio. Delivering content has largely been a race to the bottom over the last few years, but hope springs eternal. Despite fierce competition and a history of unprofitability, Level 3's expected to post a far stronger growth rate next year than either Limelight or Akamai. One "super-investor" has faith in Level 3 -- Prem Watsa's Fairfax Financial (OTC:FRFHF) has a large stake in the stock. I'd take this with a grain of salt, as Watsa's also doubling down on imploding Research In Motion (NASDAQ: RIMM).

Putting the pieces together
Today, Level 3 has some of the qualities that make up a great stock, but no stock is truly perfect. Digging deeper can help you uncover the answers you need to make a great buy -- or to stay away from a stock that's going nowhere.