The world of utilities is changing fast, and margins matter more than ever before. With shrinking sales and costly energy generation, a company's margin spread could be the difference between life and death for your dividend. Let's look at five utilities to see whether they have what it takes to pull profit for your portfolio.

Why margins matter
Making money is an excellent business skill, but keeping money is what really matters. A recent report by the Department of Energy estimates that U.S. electricity demand will clock in at a miserly 0.58% compound annual growth rate for the next decade. With top-line growth stagnant, utilities will have to make the most of each megawatt.

Companies are adopting different strategies. Some are specializing to carve out their own niche and increase economies of scale, while others are headed abroad for higher growth rates and international diversity. Whatever their decision, it all eventually comes back to the numbers; specifically, gross margins and operating margins.

Margins 101
Gross margins are the leanest, meanest accounting metric around. They ignore all the fluff of salaries, benefits, building costs, and the like, and they ask a simple question: "How much did we have to spend to sell?" For utilities, this is known as "cost of generation" and incorporates the bare minimum of inputs.

Operating margins offer more nuance and are the closest utilities investors will get to an honest bottom-line number. This margin incorporates costs of generation but also piles on any day-to-day costs of running a business.

In some industries, additional metrics such as EBITDA or net profit margins offer investors an even closer look at what's left in a company's coffers. But since utilities often have credits and debits that can span more than a year, it's best not to rely on numbers more nitpicky than operating margins.

Gross margins
Without further ado, here's how our five utilities stand up to the gross margin test: 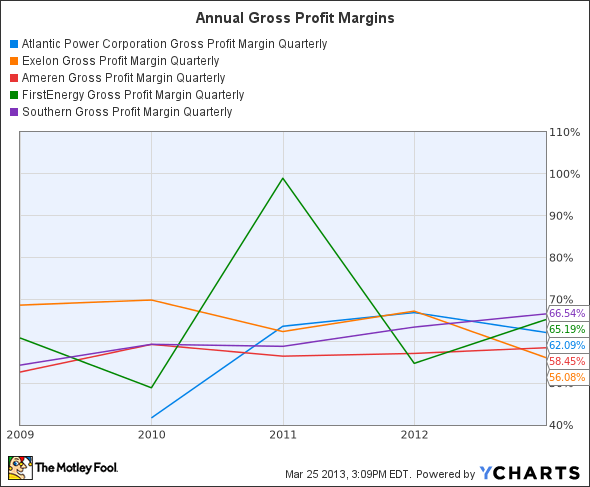 First off, you can ignore FirstEnergy's (NYSE:FE) nearly 100% spike. The company merged with Allegheny Energy in 2011, and the numbers come out wacky.

What's immediately evident is that all utilities are not created equal. Over the past five years, gross margins have headed as high as 70% and as low as 40%. Currently, Southern (NYSE:SO) takes the cake for keeping the most money in its coffers. The company currently generates 45% of its electricity from cheap natural gas, but its 36% reliance on coal will cost it in the future. Southern plans to spend $16.5 billion over the next two years to ramp up its nuclear and "clean coal" offerings.

Bringing up the rear is nuclear-centric Exelon (NASDAQ:EXC). Its 2012 merger with Constellation Energy could bring economies of scale to its business in the next few years, but its 46% nuclear generation has recently been more hindrance than help. Compared with cheap natural gas or wind production tax credits, its gross margins can't compete.

Operating margins
But gross margins don't mean a thing if management snuffs on strategy and overspends on day-to-day costs. Here's how the same companies clock in for operating margins: 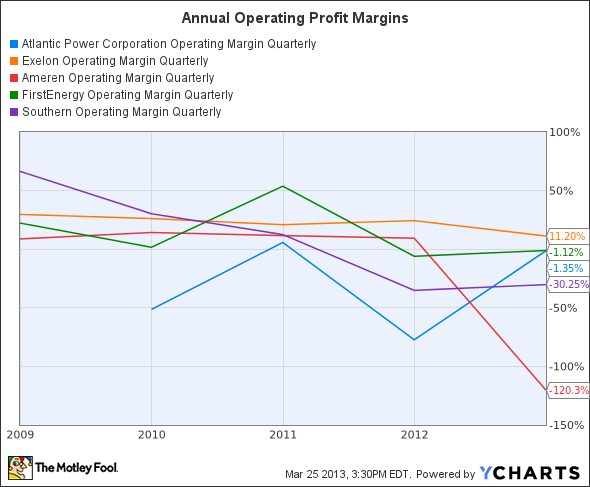 When Exelon CEO and President Chris Cane recently told shareholders that "2012 was a difficult year on the economic front for our sector," he must've been talking about every company except his own. With dwindling gross margins, Exelon has managed to pull through as the only utility with positive operating margins for 2012.

Ameren's (NYSE:AEE) notable -120% margin is mainly due to a major switch in the company's business model. The utility is selling off its generation assets and switching to a 100% regulated business, a move that should eventually offer some of the most stable income in town. For now, though, the utility will continue to suffer as it incurs costs to rebalance its books.

As a final note, Atlantic (NYSE:AT) has managed to maintain middleman status with 62% gross profit and -1.3% operating profit margins. But margins are inherently backward-looking, and this company's numbers don't reflect its current conundrums. The company recently slashed its dividend, its 2.2 debt-to-equity ratios is one of the highest in town, and it's being sued on charges of misleading shareholders.

Making the most of margins
Utilities aren't always what they seem, and examining margins is a simple way for investors to compare costs across companies. High gross profit margins can be a sign of efficient and cheap energy generation, while high operating margins mean management runs a tight ship. Use margins as a first step to understand your investment, but don't stop there. Dig deeper, find out where the company's headed, and you can be more confident than ever that your dividend's here to stay.