IDC's most recent estimates on first-quarter PC shipments serve as continued proof that the PC is dead as the preferred personal computing form factor. Sadly, Microsoft Windows 8 is to blame.

It's not an exaggeration to say that the PC market has never been this bad. So much for the "PC-Plus" era that Microsoft (MSFT -1.94%) has been talking so much about lately; given IDC's most recent estimates on PC shipments, maybe "PC-Minus" is more appropriate.

Global PC units in the first quarter got absolutely crushed, falling by 14%. That's the biggest drop that the market researcher has ever seen in a single quarter in the nearly two decades that it's been releasing quarterly estimates. That's almost twice as bad as the already-reduced 7.7% decline IDC was expecting.

There were an estimated 76.3 million PCs shipped in the first quarter, down from 88.6 million units a year ago. IDC makes it very clear that Windows 8 played no small role in the precipitous drop. IDC's Bob O'Donnell notes, "At this point, unfortunately, it seems clear that the Windows 8 launch not only failed to provide a positive boost to the PC market, but appears to have slowed the market." 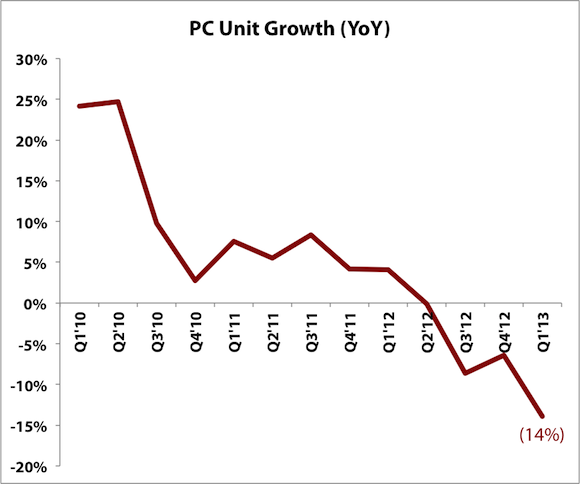 The new interface may be a bit too much for the average consumer to take in. After all, killing an interface element like the Start Menu that's been around for 17 years is a big risk. Plenty of Windows 8 users have expressed that they want the Start Menu back, even if that means downloading third-party alternatives.

There's also a growing perception that Windows 8 needs a touchscreen to be fully enjoyed. That's only partially true. While the operating system is definitely built around touch interface, it's also fully compatible with a good old-fashioned mouse and keyboard. Touch-based devices come at a premium price -- a price that consumers aren't willing to pay for a platform with so many trade-offs.

It doesn't help that the only two domestic PC giants left standing are undergoing identity crises. Hewlett-Packard (HPQ -0.48%) remains in turmoil, with its chairman just stepping down and continued debate over whether or not the company should be broken up. HP is also actively exploring other platforms from Google; the company has released both a Chromebook and Android tablet this year.

Dell (DELL.DL) is still trying to scare investors into selling the company back to Michael Dell and Silver Lake Partners. The company's recent proxy statement lays out the gloomy state of the PC market, a not-so-subtle nudge to get investors to allow the company's founder to take Dell private. That's a major change in Dell's tone, since it used to talk up all its enterprise potential -- a discrepancy that Southeastern Asset Management has called out as it opposes the deal.

Chinese vendor Lenovo held up the best with 0% growth, while all other vendors in the top five saw double-digit declines. HP's shipments fell 24% to 12 million; Dell shipped 11% less units this quarter at 9 million.

Not even Apple (AAPL -3.00%) is immune from the downturn. While the Mac maker doesn't rank in the top five globally, IDC estimates that Apple's domestic Mac shipments declined by 7.5%. That's still outpacing the broader market, and there have been other indications that iMac shipments are roaring back as the company overcomes supply constraints, but it still doesn't bode well for future Mac growth. The saving grace for Cupertino is that Apple relies much less on the PC market than its rivals, with Macs comprising just 13% of trailing-12-month sales.

Still need more proof that the PC is dead as the preferred personal computing form factor?