As I noted 11 weeks ago, cancer statistics are both staggering and disappointing. Although cancer deaths per 100,000 people have been on the downswing since 1991 thanks to access to more effective medications and better awareness about the negative health effects of smoking, there is still a lot of research and progress yet to achieve. My focus in this 12-week series is to bring to light both the need for continued research in these fields, as well as highlight ways you can profit from the biggest current and upcoming players in each area.

Over the past 10 weeks, we've looked at the 10 cancer types most expected to be diagnosed this year:

The skinny on leukemia

This year, nearly 49,000 new cases of leukemia are expected to be diagnosed. While that's well below some of the previous cancer's we've examined, the virulence of leukemia -- which is a cancer of the bone marrow or blood -- is higher than many we've reviewed in recent weeks. Leukemia is forecast to claim close to 24,000 lives this year, which makes it the sixth-deadliest cancer for both men and women.

Although early stage detection really doesn't exist unless you're already presenting symptoms (fatigue, paleness, weight loss, bruising easily, etc.) or happen to be in the right place at the right time and are diagnosed during a blood test, the curability and severity of symptoms depends on which of these four diseases you have. Five-year survival rates for all leukemias have increased dramatically, from 34% in 1975-1977 to 58% as of 2002-2008, according to the American Cancer Society (links opens PDF file), but some offer better hope than others. As the ACS notes, those with CLL have an 82% chance of five-year survival, whereas AML patients have just a 25% chance. 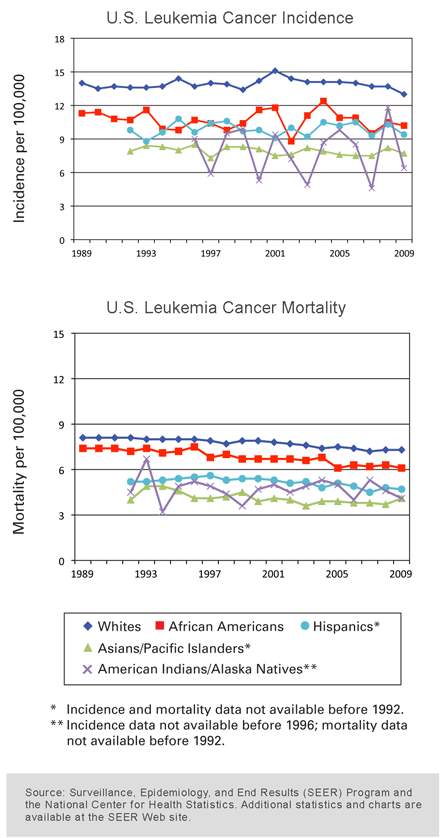 The risk factors associated with leukemia are just as varying as the statistics with regard to five-year survival. Cigarette smoking, for instance, is a big risk factor for AML, while the probability of CLL has a lot to do with the genetics in your family. One common theme that appears to be a risk factor across all types of leukemia is radiation exposure -- especially through the course of receiving chemotherapy or treating an existing cancer.

Where investment dollars are headed
Although there are numerous medications targeting leukemia, we'll stick to these four most common types listed above. Here's a look at some of the most common therapeutic agents used to treat leukemia.

I could nearly go on all day with the therapies used to treat leukemia, but these are some of the most common branded names. There are also numerous generic treatments used to treat a broad range of leukemias. However, as we've witnessed previously, not every drug trial turns out to be a success. Seattle Genetics (NASDAQ:SGEN), discontinued its trial for a monoclonal antibody drug called lintuzumab in 2010 after it failed to provide a statistical benefit to patients in a mid-stage trial. The company, which admittedly has one of the newest and hottest technological capabilities with its antibody-drug conjugates (ADC) technology, is now developing an ADC called SGN-CD33A for the treatment of AML. However, it is not yet in phase 1 trials, and it will take years to assess this drug’s potential.

What's coming down the pipeline
Now that you have a better idea of what's going in in the world of leukemia treatments, let's have a look at some of the clinical-stage therapies that could be changing lives in hopefully the not-so-distant future.

Your best investment
As with the treatments, I could spend an entire day talking about what's coming down the pipeline and still might leave a few dozen potential therapies out. What can definitely be said is that researchers and big pharmaceutical companies are certainly throwing their weight around with regard to research into leukemia.

If you were to look at this from an investing perspective, I think you have some clear-cut winners in this space -- although I'd say picking a favorite might be impossible.

Obviously, both experimental drugs have a lot going for them at the moment. Pharmacyclics has a collaborative partnership with J&J's Janssen that could net it up to $975 million in royalty payments. Ibrutinib has performed splendidly in trials, but it'll certainly need to keep those expectations sky high if it wants to support its already frothy valuation.

Gilead offers promise from its existing pipeline of HIV and hepatitis drugs, but is still a long way away from seeing any bottom-line impact from Idelalisib. Make no mistake about what I'm saying here: I like Gilead a lot -- but any real results from Idelalisib are still years down the road.

I think the most solid play in leukemia is Pfizer. For patients who had been previously treating with Novartis' Gleevec and exhibited accelerated CML, Bosulif helped trial patients' blood counts return to normal in 33% of cases. Overall, 55% of patients achieved a normal blood count with no sign of leukemia within the first 48 weeks of treatment. Bosulif offered some of the top progression-free response times and a high cytogenetic response rate, making it the most attractive second-line treatment available -- in my opinion, at least.

Stay tuned next week, when we tackle the current and upcoming therapies for the treatment of pancreatic cancer in this "Tackling Cancer" series.