Mortgage rates stayed steady this week ahead of the Federal Reserve's pivotal meeting next Tuesday and Wednesday.

Mortgage rates are continuing to plateau ahead of next week's much-anticipated decision by the Federal Reserve. Data released this morning by Freddie Mac showed that the national average rate on a 30-year fixed rate mortgage was unchanged from the previous seven-day period, coming in at 4.57%. 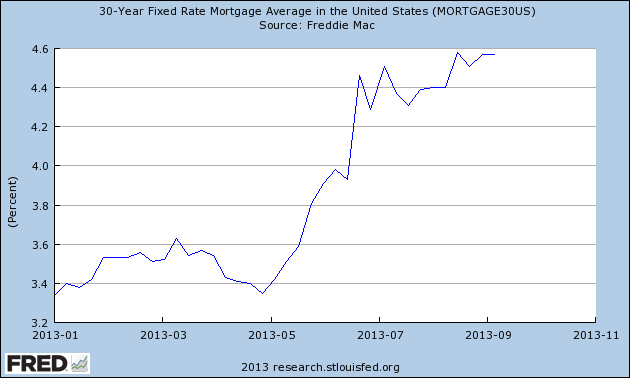 Over the last few months, mortgage rates have shot up at an unprecedented clip. The initial trigger was the central bank's intimation back in May that it could soon begin to reduce its support for the economy via QE3. In the three months since then, rates on the benchmark 30-year mortgage jumped by more than 100 basis points.

The big question now concerns when the Fed will actually begin to reduce its monthly purchases of mortgage-backed securities. When it does so, the reduced demand for them will drive their price down and, as a result, their yield up. It's the latter which then translates into higher mortgage rates.

According to The Wall Street Journal, many economists expect the central bank to begin cutting back its $85-billion-a-month bond-buying program at its monetary policy meeting on Tuesday and Wednesday of next week.

If there's one group of companies that stands to be affected by this more than others, it's the mortgage REITs like Annaly Capital Management (NLY -1.17%) and American Capital Agency (AGNC -1.15%).

Because these companies hold mortgage-backed securities, their valuations are heavily dependent on supply and demand in the MBS market. If demand begins to wane and prices fall, their book values will move in kind. Year-to-date they're already down by 18% and 19%, respectively.