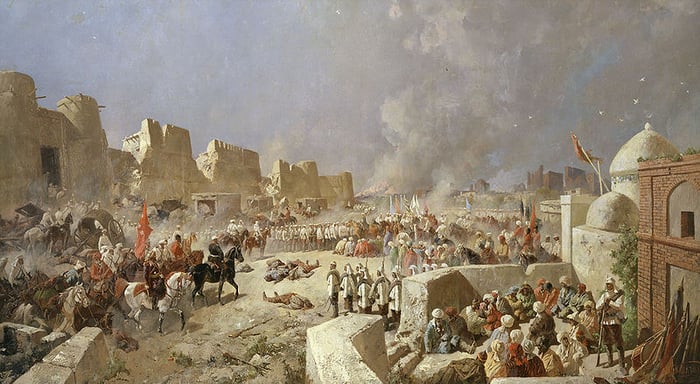 When large countries go to war against countries that are many times smaller than them, it seems obvious that the larger nation would almost always win -- but that's not the case.

According to a study cited in Malcolm Gladwell's latest book David and Goliath, throughout all of the wars fought over the last 200 years, the weaker country has prevailed in nearly 30% of the conflicts. And if the weaker country chose to fight an unconventional war, its success rate shot up to 63.6%.

For the individual investor who thinks he's at a disadvantage to hedge funds and other institutional investors on Wall Street, this is an apt and powerful metaphor. And if you believe some of the world's most successful investors, there's truth to it as well.

The virtues of insignificance
It's hard not to be intimidated by the resources, connections, and sophistication of hedge funds and their ilk. They have billions of dollars to invest. They hire the brightest minds in the world. And they have access to inside information and technology that few individual investors have.

But are these necessarily advantages? "We have, I think, a very rigid and limited definition of what an advantage is," writes Gladwell. "We think of things as helpful that actually aren't and think of other things as unhelpful that in reality leave us stronger and wiser."

Take size as an example. While having billions of dollars to invest seems like it would confer benefits over, say, your average Joe or Jane who has a $50,000 portfolio, the reality may be the precise opposite. At a certain point, size becomes more of a hindrance than a help.

Far from expanding your options, having billions of dollars to invest dramatically curtails them by limiting you to large-cap stocks. By Joel Greenblatt's estimate, which he shared in You Can Be a Stock Market Genius, having $12 billion in assets under management would reduce an investor's universe of stocks from more than 9,000 to somewhere between 800 and 1,500.

And being "small" isn't the only advantage. As an individual investor, you also have time. That is, you don't have investors and analysts breathing down your neck each quarter to see how you performed over any three-month time period.

"The biggest risk investors face is losing money between now and whenever they'll need it," my colleague Morgan Housel wrote. "The good news for you -- and bad news for Wall Street -- is that the odds of losing money drops precipitously the longer you're invested for."

In addition, you can own whatever you want without fear of judgment or redemptions.

Of all the things I've learned about investing, this is perhaps the most surprising. Given the opportunity to make an outsized profit by owning an unknown stock versus the assurance of losing only a small amount on an established company, most institutional investors would choose the latter.

"Success is one thing," says the famed mutual fund manager Peter Lynch in One Up On Wall Street. "But it's more important not to look bad if you fail."

Redefining weaknesses
Near the end of the World War I, T. E. Lawrence (better known as Lawrence of Arabia) led a ragtag collection of nomadic soldiers, "most of whom [had] never fired a rifle," in a series of stunning victories over the formidable Turkish army, which, at the time, was occupying the Arabian Peninsula.

While the Turks had weapons and resources, which Lawrence's troops did not, these things also left them immobile and on the defensive. "There is a set of advantages that have to do with material resources, and there is a set that have to do with the absence of material resources," Gladwell wrote. "The reason that underdogs win as often as they do is that the latter is sometimes every bit the equal of the former."

This is a lesson that investors -- and particularly those at the beginning of their careers -- would be wise to heed. Far from allowing your relative insignificance to discourage you, you should embrace it as your strongest competitive advantage.