Internet radio upstart Pandora Media (NYSE:P) is doing everything in its power to justify its massive valuation and fend of increased competition from a myriad of competitors including Apple (NASDAQ:AAPL) and Google.

But can it actually cash in on its disruptive potential, especially among such fierce and growing competition?

That, it turns out, is the $5.7 billion dollar question. And unfortunately for Pandora investors, Thursday's third-quarter earnings report didn't necessarily go a long way in clearing the matter up.

In that spirit, let's take a look at three of the most important items from Pandora's earnings report.

1 – User growth is slowing
Unfortunately for Pandora, user growth reached an inflection point in Q3. The number of people using the service actually declined for the first time on record on a quarter-over-quarter basis in Q3. 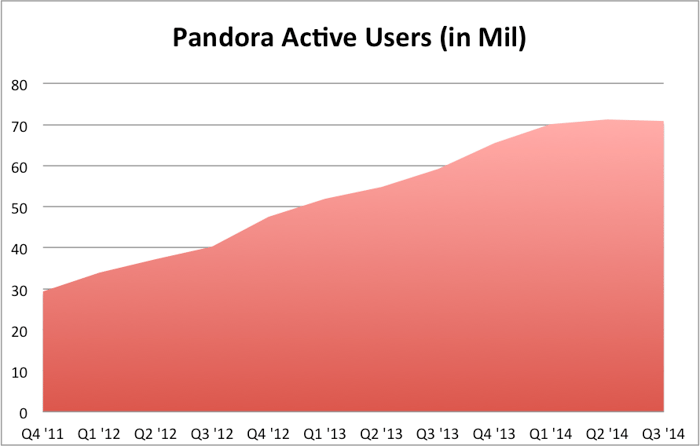 Users will quickly point out that Apple's recently launched iTunes Radio service, basically a Pandora clone with iTunes integration, rolled out during the quarter. Apple certainly took a pot shot at Pandora when it announced that 11 million listeners tried iTunes Radio its first weekend on the market.

However, the general consensus is still that Pandora's service enjoys an edge in terms of selecting songs users really want to hear, thanks to its 13-year old Music Genome project. The hope is that by having superior algorithms powering Pandora's service, Pandora will be able to fend off the competition like Apple. Although with the massive trove of listener data that a company like Apple enjoys, it's understandable how this advantage could erode over time for Pandora.

No matter what, slowing user growth raises a serious red flag for a company still working toward profitability like Pandora.

However, there is also room for optimism here as well because even despite slowing user growth...

2 – Pandora's business model is still gaining steam
Regardless the number of people actually using the service, Pandora is undeniably doing a better job making money off its users. Two metrics are particularly helpful in understand this trend. The first is Pandora's revenue per user, which has been consistently gaining steam over the last several years. 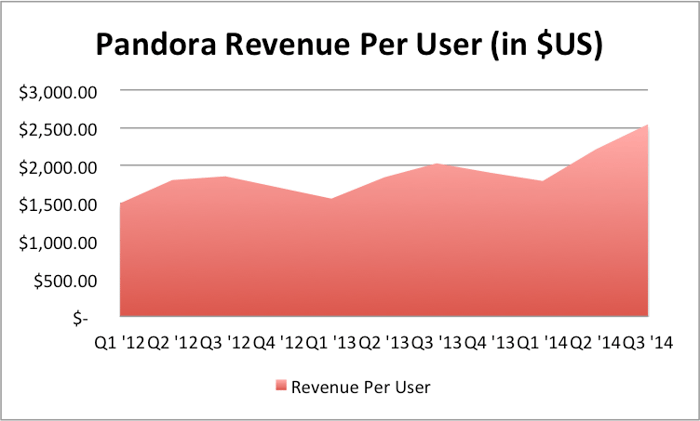 Pretty hard to argue with the progress Pandora's made on the monetization front. Over the last 11 quarters, Pandora's increased revenue per user by nearly 60%. That's impressive no matter how you slice it.

The progress Pandora's made here though is largely a reflection of perhaps the most important single metric an investors needs to monitor in order to gauge the success of Pandora's overall business model – Revenue Per 1000 Ad impressions, or simply RPMs. 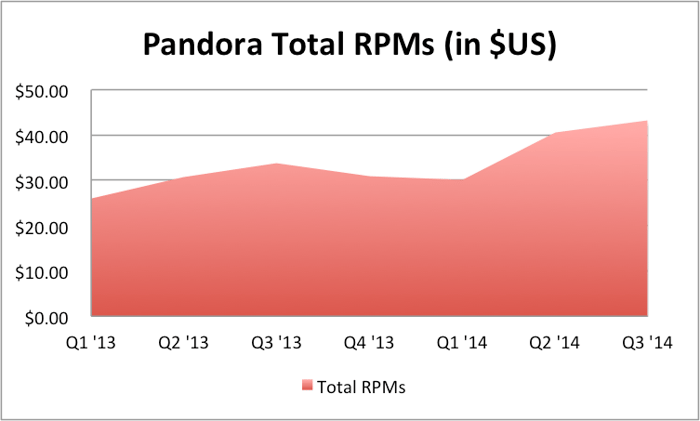 Pandora hasn't been as forthcoming about breaking these figures out in the past, which is why the data set doesn't reach as far back as the above charts.

For a company who's long-term strategy is predicated on advertising, this is really the holy grail in gauging Pandora's overall health. Thankfully for Pandora investors, the company has been aggressive in expanding its advertising capabilities in both national and local markets. This has given Pandora a nice lift, and helped edge the company further toward what it claims will be eventual profitability. If this number can continue to rise, Pandora will be well on track to realize that vision.

However, as my third point highlights, that isn't necessarily a sure thing, especially in the short term.

3 – Pandora offered soft guidance for the coming quarter
Although not missing analysts' expectations by much, Pandora reiterated that it sees its financials coming in slightly lower than expected in the upcoming three months.

For the coming quarter, Pandora said it expects to generate sales between $185 million and $190 million, right in line with the $187.5 million estimates. However EPS should be roughly between $0.02 and $0.04, down slightly from the $0.04 estimated.

More importantly than playing the analyst game, Pandora's guidance does represent a slight slowing of growth from the same period last year. If Pandora meets the mid-point of its guidance, it will increase sales 49%, down from 54% in Q4 last year.

Again, this is still strong growth for Pandora. However, as with the user figures, it hints that Pandora's growth engine might be slowing, which should certainly give investors pause.

Overall, Pandora's most recently reported quarter should be viewed as a success. However sadly, the future remains just about as uncertain as it always has for the streaming upstart.