Please ensure Javascript is enabled for purposes of website accessibility
Log In Help Join The Motley Fool
Free Article Join Over 1 Million Premium Members And Get More In-Depth Stock Guidance and Research
By Rich Smith - Dec 20, 2013 at 10:59AM

Suggestions that AeroVironment's drone fleet is suffering massive attrition may be based on bad math.

For such a tiny company ($631 million market cap), "drone" robotic aircraft manufacturer AeroVironment (AVAV -0.95%) sure is full of surprises. And the folks getting surprised most often this year... have been the defense industry analysts who follow the company.

Given that AeroVironment had already disappointed investors with negative "earnings surprises" three times in a row the preceding three quarters, that probably seemed like safe advice. But when the company actually reported its Q2 2014 numbers, what did we see? Revenues were down 19% year over year, true. But the news wasn't nearly as bad as the 33% plunge in revenues that Sterne had predicted. What's more, the company's "drone" business, which was supposed to be the source of all its problems, showed a revenue decline of only 14%.

It gets an investor to wondering: If Sterne could be so wrong about AeroVironment's revenues, what else might it be getting wrong?

Where have all the drones gone?
In the course of making its Q2 prediction, Sterne laid out some of the reasons for its pessimism:

[T]he need for building on the inventory of Ravens is limited. ~19,000 Ravens have been built over the last decade and current estimates assume ~5,000 in inventory. The Raven is designed to operate for 200 takeoffs and landings, but in war time this can be reduced by over two thirds, with many Ravens lost due to lost data links.

So by Sterne's calculations, about 74% of the drones that AeroVironment built over the past decade are now kaput. Dead to the world. And with combat operations in Afghanistan winding down, the analyst worried there'd be no need to replace them -- hence weak sales and weak revenues at AeroVironment for the foreseeable future. But is that really the case?

Drone math
Curious to find out, I reached out to AeroVironment investor relations head Steve Gitlin for some answers. What he told me, in a nutshell, is this: 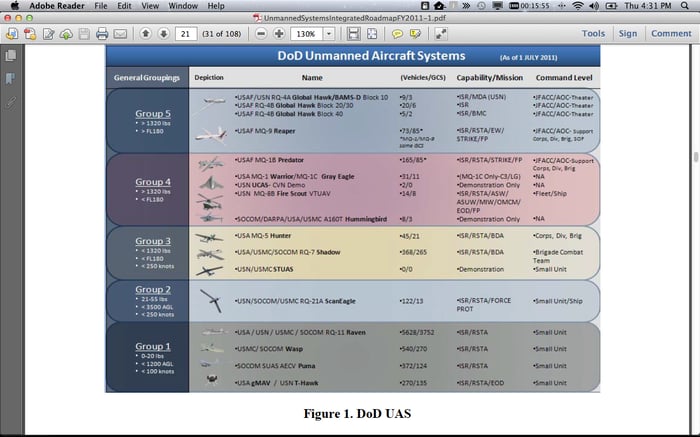 To figure out how many of AeroVironment's drones remain in service today, we need to know two things. First, how many drones has it sold to the Pentagon since the Pentagon did its drone inventory in July 2011? Second, how many drones has AeroVironment sold to allied nations? With these answers in hand, we should be able to calculate how many of the original 22,000 drones built remain in service today.

Fuzzy drone math
Unfortunately, AeroVironment hasn't released this information publicly, and it wouldn't be fair to other investors for the company to give the answers to me privately -- but we can at least make some educated guesses on our own.

Regarding Pentagon sales, we know that 22,000 drones were sold over 10 years. So let's assume 20% of those were sold over the last two years (i.e., since July 2011). We can't be sure this number is precisely correct, but it seems a reasonable estimate. If it's right, it works out to 4,400 drones, more than we knew about when the Pentagon last took inventory of the things.

As far as sales to foreign countries go, over the past 10 years, AeroVironment's 10-K filings show that about 18.25% of all revenues went to overseas customers. Of course, these sales include both UAVs, and also sales from the company's battery charging division. So again, we're guessing as to the precise proportion of UAV sales to overseas customers. Still, let's assume that 18.25% of AV's 22,000 drones went overseas, and see what happens.

Foolish takeaway
Add these two numbers to the 6,540 drones that we know were still operational and in Pentagon service as of July 1, 2011, we come to the final result: Of the 22,000 drones AeroVironment has built over its lifetime, as many as 14,955 may still be alive and kicking.

Secretary of the Army John McHugh checks out an AeroVironment Raven. Is it alive? Source: Wikimedia Commons.

Now, inquiring minds can still differ on what this number means. If you're an AeroVironment "bear", you can reason that since Sterne Agee thought 5,000 drones was too many, and the Pentagon won't need to buy any more, then 15,000 drones is way, way too many. This would imply a major headwind to AeroVironment making any more sales. It might even presage a drone liquidation sale, such as we're already seeing happen with U.S. MRAPs in Afghanistan.

On the other hand, AeroVironment "bulls" will argue that the military made a huge investment in buying 15,000 drones. And since AV's drones are upgradable (for instance, the Raven fleet has gone through four rounds of upgrades already, most recently with the installation of gimbaled sensor payloads), maybe the Army will just keep its AeroVironment drones, upgrade them as needed, and never buy from anyone else.

One thing's for certain: If 68% of AeroVironment's drones are still alive and kicking today, as opposed to the 26% that Sterne Agee estimated, then these drones are a whole lot harder to kill than we've been led to believe. Rumors of their deaths really do appear to have been greatly exaggerated.