Investors betting Chelsea (NASDAQ: CHTP) would win FDA approval for its drug Northera for neurogenic orthostatic hypotension, or NOH, in multiple systems atrophy and Parkinson's patients, were dealt a disappointing blow when the FDA opted against approving the drug in 2012.

However, the FDA's willingness to consider data from another Northera phase 3 study breathed new life into Chelsea, lifting shares more than 350% in 2013. 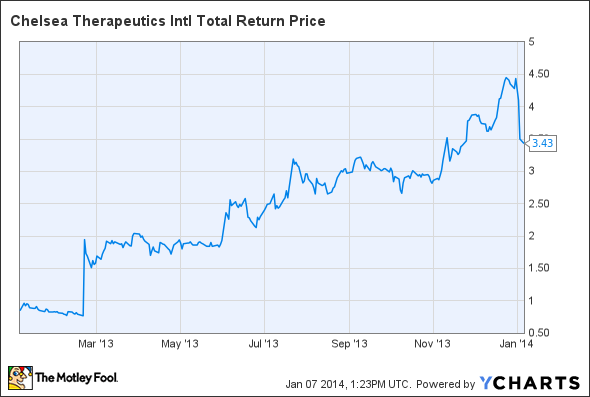 Stumbling along the path
Chelsea acquired Northera from Dainippon Sumitomo Pharma Co., Ltd in 2006. The oral drug helps to relieve symptoms of dizziness and prevent falls tied to low blood pressure in patients with diseases associated with a malfunctioning of the autonomic nervous system -- the system that automatically controls functions in the body such as heart rate.

After ushering Northera through trials, Chelsea edged out narrow support from an FDA review panel in early 2012. That panel voted seven to four in favor of Northera in recognition of a lack of other NOH treatment options.

However, in an uncommon move a month later, the FDA cited a lack of insight into the durability of Northera's effect on patients and concerns over data collected at the study's highest enrolling site as the reasons behind rebuffing the panel's recommendation.

That decision forced Chelsea to rejigger another ongoing Northera study, known as 306B, to address the FDA's worries.

But those changes didn't put an end to Northera's troubles. After explaining the proposed changes to its 306B study, the FDA concluded a potential un-blinding of patient data presented too large a risk to the study's objectivity. As a result, the FDA determined results from 306B wouldn't be likely to provide enough evidence to support Northera's approval.

In order to preserve cash as it considered options, Chelsea began an aggressive cost-cutting program following that decision, including significant lay-offs and the removal of its founder as CEO.

Those tough decisions and the resulting lower expenses may end up positioning Chelsea for bigger profits as hopes renew for Northera's commercialization.

In February, the FDA changed its position, agreeing to use the 306B study as part of a new submission for approval. Specifically, the FDA suggested short term benefits from 306B could serve as a basis of approval if durability questions could be answered in a post-approval follow up study. That news prompted Chelsea to refile for Northera's approval this summer, resulting in an expected February 14, 2014 FDA decision date. It also prompted Chelsea to address the durability issue with the launch of a new study that enrolled its first patient in early December.

Exiting stage left
The need for new NOH therapies for MSA and Parkinson's patients remains high. As a result, the FDA has awarded Chelsea a potentially lucrative orphan designation for Northera.

That designation has been a windfall for a number of emerging biotechnology companies, including BioMarin (NASDAQ:BMRN), whose $365,000 a year Naglazyme for Maroteaux-Lamy syndrome has provided the company with the firepower to roll out additional treatments including Kuvan and Aldurazyme. It also helped United Therapeutics (NASDAQ:UTHR) build a billion dollar a year franchise selling Remodulin, Tyvaso, and Adcirca as treatment for the rare pulmonary arterial hypertension indication.

Chelsea will get additional insight into when it may be able to profit from that designation when an FDA advisory panel evaluates Northera on January 14th, 2014. If that advisory panel supports Northera's approval again, it would be surprising if the FDA balks when it decides Northera's fate in mid February.

If Northera does win approval, it could clear the way for Chelsea broaden its addressable market by studying the drug as a treatment in other norepinephrine-related conditions and diseases, such as intradialytic hypotension, fibromyalgia and adult attention deficit hyperactivity disorder. Regardless, a positive decision would provide much needed clarity -- something that's been lacking for over a year.