Today, I shift to the final of the five in this article series, Align Technology. (NASDAQ:ALGN) The company's shares more than doubled in 2013 as its Invisalign brand gained ground against big competitors 3M (NYSE:MMM) and Danaher (NYSE:DHR). 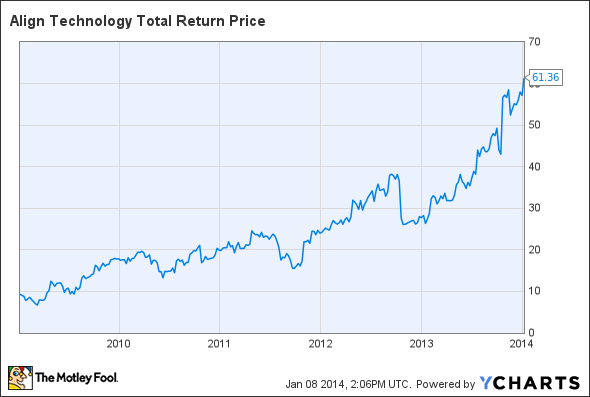 Through its Clear Aligner business, Align competes in the $1.2 billion orthodontics market, which represents 6% of the $21 billion global dental market.  That Clear Aligner business accounts for 93% of the Align's sales, driven by the well known Invisalign brand -- a product line of clear removable teeth aligners used as an alternative to traditional metal braces.

Consumer demand for Invisalign braces and the addition of over 1,600 new accounts helped push the Align's third quarter sales up more than 20% to $165 million in the past year. Roughly $94 million of those sales came from Invisalign Full, but faster growth came from Invisalign Teen, which was up 25%, and Invisalign Express, which grew 38% from a year ago. A major driver of that demand was overseas markets, where sales climbed 31% from last year.

That international diversification is not only providing faster growth, but insulating Align to highly seasonal U.S. demand. Historically, peak demand from teens has been weighted toward the summer school break. Once kids return to school, business tends to slow in the fourth quarter. However, in overseas markets doctors tend to see demand increase following summer vacation.season. That has Align forecasting for sequential international growth during the fourth quarter, a notable contrast to the historical U.S. winter slump.

That international growth has Align expecting case volume to climb 21% to 24% year-over-year in the fourth quarter. If it does, revenue should total between $169 million and $173 million in Q4. Higher training costs and a seasonal product mix shift to lower margin Invisalign Express is likely to pressure gross margin in the quarter, but it should still remain around 75%. Given operating margin should remain about the same as the third quarter, falling within the range of 25.2% to 26%, EPS should come in at $0.41 to $0.43, according to the company.

Since demand for dental products historically outpaces GDP growth by one to two times, the dental market is intriguing. However, it's a fragmented industry dominated by big conglomerates on one end and small, private companies on the other. As a result, outside of Align there aren't many pure play publicly traded choices for investors.

One that is public is Dentsply (NASDAQ:XRAY), a diversified maker of supplies stretching from flourides to orthodontics to implants.  Dentsply generates $3 billion a year in sales, but it's far from the biggest player in Orthodontics. It not only trails Align in market share, but also trails the much more diversified conglomerates 3M and Danaher.

3M offers translucent ceramic brace brackets through its Unitek Clarity brand as well as traditional metal brackets. Combined with a much broader medical product line up, 3M gets roughly 17% of its sales from its health care business.

And Danaher also plays in the orthodontics market through Ormco, a company selling brackets, aligners, and related products that falls within Danaher's broad dental business. Over $8 billion of Danaher's $18 billion in 2012 sales came from the company's diversified medical and dental products segment.

Outside of the company's success with Invisalign, Align is also gaining traction within its smaller scanner and CAD/CAM services segment.  That business, which sells products used to custom design replacement teeth, grew 38% year-over-year to $11 million in the third quarter. Align is also controlling expenses, with lower media spending reducing operating costs by $2 million from the second quarter and $12 million from last year.

Align completed its $150 million buyback plan in September, buying back $95 million worth of its stock, or 2.7 million shares, over the first nine months of 2013. Given Align has $400 million in cash and equivalents on its balance sheet, up from $356 million heading into 2013, it wouldn't be surprising to see the company embrace additional shareholder friendly programs in 2014.  That suggests there are plenty of reasons to keep an eye on Align this year.