A healthy payment from big biotech Celgene Corporation (NASDAQ:CELG) helped Epizyme Inc. (NASDAQ:EPZM) make one of the biggest moves in biotech so far this year.

News that Epizyme Inc.'s EPZ-5676 met its proof of concept milestone in phase 1 dosing trials triggered a $25 million payment from Celgene Corporation, and shares spiked more than 80% this past week. But that move isn't just good for Epizyme Inc. investors, it's also a win for Celgene Corporation given its equity stake in the company. 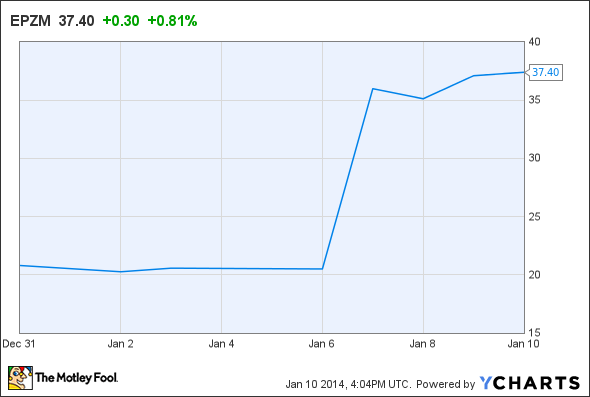 Few are bigger than oncology powerhouse Celgene Corporation, particularly when it comes to treating the blood cancer lymphoma. Celgene's Revlimid is one of oncology's top sellers, with Celgene forecasting it will generate sales of over $4 billion in 2013. Across Celgene's Revlimid, Abraxane, Vidaza, and Pomalyst, Celgene is guiding investors to expect full year sales of $6.2 billion for 2013.

But Celgene recognizes it's going to have to keep innovating if it wants to see that franchise grow. So, it's been spreading money around to lock up promising new drugs. It has inked deals potentially worth hundreds of millions with emerging cancer biotech companies OncoMed, blubird bio, and Epizyme Inc..

The Epizyme collaboration extends Celgene's push into epigenetics, giving Celgene overseas rights to Epizyme's EPZ-5676. That drug halts activity of the DOT1L protein that is associated with acute leukemias, including mixed lineage leukemia, or MLL.

The compound is about as early stage as you can get. In fact, all of Epizyme's candidates are fledgling given its most advanced drug has been in phase 1 studies for less than a year.

So, why is Celgene so interested in this emerging company? Because epigenetics offers an intriguing approach to battling disease that could allow a single molecule to affect multiple cancer genes. This specific targeting may allow EPZ-5676 to kill MLL cells without killing non-MLL cells -- a big benefit, especially in young patients.

Dealmaking its way through clinic

Among Epizyme Inc.'s C-Suite leaders are Robert Gould, its CEO, and Jason Rhodes, its President. Gould came to Epizyme after serving as a Director of Novel Therapeutics, a research institute backed by MIT and Harvard. Prior to that position, Gould spent 20 years at Merck, where he was Vice President of External Research at Merck Research Laboratories.

Rhodes made a name for himself as Alnylam's dealmaker; building collaborations that helped make Alnylam into one of 2013's best performers. Since joining Epizyme in 2010, Rhodes and Gould have landed partnerships with Eisai, GlaxoSmithKline, (NYSE:GSK) and Celgene.

Eisai paid Epizyme Inc. $6 million upfront and agreed to as much as $200 million in additional milestones and double digit royalties to license drugs targeting epigenetic enzyme EZH2, which is associated with Lymphoma. So far, that deal has added $30 million in payments to Epizyme's balance sheet.

The GlaxoSmithKline deal included $20 million upfront as part of payments that could eventually total more than $650 million. So far, Epizyme has banked roughly $40 million from Glaxo through its work on HMT inhibiting drugs.

And the Celgene collaboration, which gave Celgene the overseas rights to EPZ-5676, included an upfront payment to Epizyme of $65 million. The success in the proof-of-concept of EPZ-5676 means Celgene has paid Epizyme $90 million so far and more could come given another $135 million in milestone payments are tied to the compound.

Celgene is likely smiling broadly because of Epizyme Inc.'s success, but not just because the drug will advance further into human trials. It's also smiling because of a savvy decision to take a 12.5% ownership stake in Epizyme when the deal was first established.  Celgene paid $25 million for convertible shares and when Epizyme went public last June, Celgene bought another 66,666 shares and converted those preferred shares into common stock.  That resulted in Celgene owning more than 3.3 million shares in Epizyme, or 10% of its fully diluted equity. Given Epizyme's eye popping run this month, that means Celgene's stake in Epizyme is worth roughly $50 million more than it was in December and that makes Epizyme's success an even better win, win for the two companies.