If consumers fall in love with a brand on a massive scale -- in this case based on a survey of 1.2 million people -- then future growth for that brand is highly likely. This is imperative information for any investor.

YouGov BrandIndex recently conducted a study to determine the 10 brands consumers loved most in 2013. The study was based on 1.2 million interviews of consumers who were at least 18 years old. Buzz scores range from negative 100 to 100, indicating positive or negative consumer sentiment for the brand. The brands that scored highest in 2013 are likely to see continued momentum in 2014.

It doesn't matter what's going on with the global economy, Cheerios are always in high demand. This is a positive for General Mills. The biggest news for Cheerios is that it will now be made GMO-free, as in without genetically modified organisms. General Mills is also attempting to innovate off the popularity of its Cheerios brand, the latest being Multi-Grain Dark Chocolate Crunch Cheerios.

If you're looking at General Mills as a potential investment, then you should expect slow and steady returns. General Mills also currently offers a generous dividend yield of 3.10%. These are all positives, but Kellogg is innovating faster. For more information on Kellogg, you can read the following article: "Move Over GMO-Free Cheerios, Kellogg's Making Innovative Moves of Its Own."

V8 is owned by Campbell Soup. For those who don't know, the brand's name stems from the original V8 containing eight different vegetables.

Campbell Soup has been a long-term winner for value investors, and it currently yields 2.90%. On the other hand, a debt-to-equity ratio of 3.60 might limit growth potential in free cash flow. Comparatively, Kellogg and General Mills have debt-to-equity ratios of 2.57 and 1.07. While these aren't ideal Kellogg and General Mills have generated significant operating cash flow over the past twelve months, to the tune of $2.62 billion and $1.77 billion, much higher than Campbell Soup at $908 million.

The rising popularity of generic drugs combined with Walgreen's patched up relationship with Express Scripts has led to the return of once-lost customers.

The following are some interesting stats from Google's (GOOGL -0.40%) YouTube website. YouTube averages 1 billion visitors per month, daily subscribers are up threefold compared to last year, it reaches more U.S. consumers between the ages of 18 to 34 than any cable network, and 6 billion hours of video are watched per month.

That's one hour of video for every human being on the planet, and it's a 50% increase year over year. The reason this growth is still possible: 80% of YouTube's traffic comes from outside the United States. In my opinion, Google is in the early stages of being the next General Electric in regards to innovation.

A survey done by Forbes back in April 2013 indicated that Lowe's (LOW -0.26%) customers were more impressed with Lowe's than Home Depot for several reasons, including customer service, in-store experience, store appearance, and store layout.

Home Depot and Lowe's often trade close together. The key for both is the housing market. If you plan on investing in one of these companies, keep an eye on the average 30-year fixed mortgage rate and whether or not increases in mortgage rates substantially slow down home improvement purchases.

The following stories have had a lot to do with the brand's success: The Men Who Built America (mesmerizing and highly recommended), Hatfields & McCoys, Top Shot, and The Bible. Would it surprise you to learn that Walt Disney (DIS 1.50%) owns a 50% share in History Channel?

This is yet another example of Disney's ability to target massive audiences with high-quality content. Disney should remain one of the best long-term investments on the planet. Don't expect phenomenal stock appreciation, but fewer companies are more reliable.

Consumers find Subway to be fresh, healthy, and convenient. Furthermore, eating Subway sandwiches on a regular basis is often perceived by consumers as a way to lose weight. Popular ad campaigns, celebrity endorsements, backed by decent food make this restaurant chain a winner. Unfortunately, it's a private company.

Ford (F 0.69%) was a top-notch investment coming out of the financial crisis. Those who invested in Alan Mulally were richly rewarded. And while it's often perceived that Ford is out of gas, consider its top-line performance over the past year vs. Honda and Toyota: 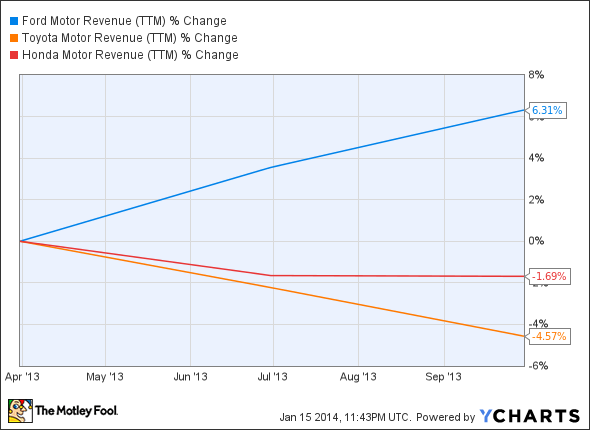 On top of that, Ford is only trading at 12 times earnings. Ford might not appreciate like it has over the past five years, but the company remains on the right track.

Amazon makes this list twice. It has also taken the place of Subway at number one, which had been number one on this list in 2012 and 2011. Amazon CEO Jeff Bezos is all about taking care of customers.

For example, Amazon also placed number one on the American Customer Satisfaction Index, with a score of 85, above the Internet Retailer average of 82. For a quick picture at Amazon's top-line growth, consider the 10-year revenue chart below: 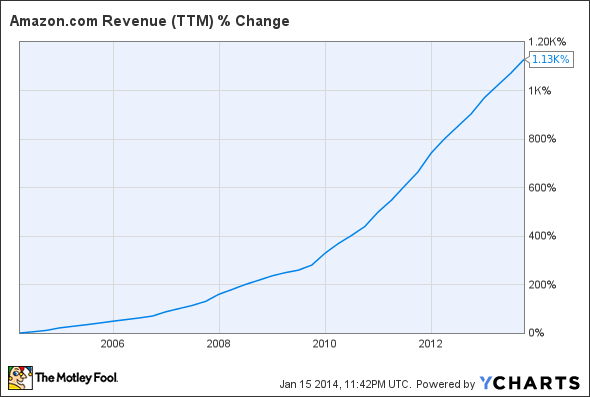 The concerns for investors is that Amazon sports a profit margin of just 0.19% and it's currently trading at 150 times forward earnings. Amazon is a high-risk/high-reward investment. However, the underlying business is a long-term winner.

The information above is meant to generate investing ideas that might offer strong potential. That said, please do your own due diligence prior to making any investment decisions.

Why Netflix Stock Is Surging Today
363%