It's been a banner start to the year for mobile comeback kid BlackBerry (BB -6.92%)

After years of mismanagement and plummeting smartphone market share, BlackBerry appeared to be stuck in death spiral that threatened to eventually take down the entire company. All of that changed late last year when BlackBerry made a number of changes aimed at pulling the company out of its multi-year tailspin, most notably the appointment of John Chen as BlackBerry's new CEO.

BlackBerry's new management has secured several key wins in the last several months that have been a boon for BlackBerry shareholders. In fact, over the last three months alone, BlackBerry stock has gained nearly 70% and attracted the support of one of the world's most influential hedge funds as well. 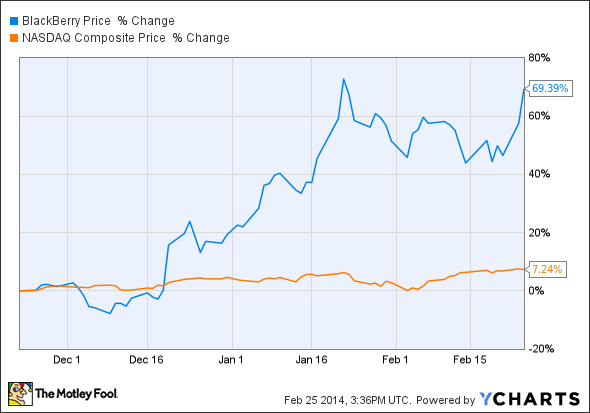 So, how did BlackBerry arrive at this point?

BlackBerry's new business model
The progress BlackBerry has made over the last few months is truly monumental, especially considering the last several years, in which execution was something of a rarity.

From a 30,000-foot perspective, BlackBerry's turnaround had centered on the realization that it is no longer a hardware company and that refashioning BlackBerry's business model around services maximizes its chances for a profitable and sustainable future.

In doing so, BlackBerry took a page from smartphone power Apple's playbook by outsourcing its hardware manufacturing to Chinese assembly leader Foxconn. As part of its new hardware arrangement, BlackBerry's design and engineering team would work with Foxconn's design team, but hand off the actual construction of its devices to its new partner. This makes sense on a number of fronts, but perhaps most significantly, it helps to mitigate the huge inventory risks that had plagued BlackBerry over the last years.

This leaves BlackBerry free to focus its efforts on monetizing its suite of three software platforms: BBM, BlackBerry Enterprise Services, and its QNX mobile operating system. And although it's still early in its comeback bid, BlackBerry appears to have made some pretty impressive headway already in these efforts.

Winning where it counts
Over the past few weeks, BlackBerry has seen a number of key breakthroughs that suggest its software-oriented model is slowly taking hold.

Without question, the single biggest shot in the arm for BlackBerry of late was Facebook's $19 billion buyout of WhatsApp last week. BlackBerry's shares rose in reaction to the news, which gives credence to BlackBerry's long argument in favor of BBM's value as a messaging platform. And although BBM pales in comparison to WhatsApp in some very key respects, like number of users and engagement, BlackBerry has positioned its well-known messaging service to continue to grow by opening it up to other smartphone platforms, including Apple's iOS, Google's Android, and Microsoft's Windows Phone.

BlackBerry also notched another key victory for its QNX Enabled Devices division this week when Ford Motor (F -3.46%) announced it would switch from Microsoft's Windows to BlackBerry's software to power Ford's Sync in-car technology. This adds another key domestic automaker to BlackBerry's already-impressive roster of automakers that use its QNX operating system, including General Motors, Nissan Motors, Kia Motors, and Fiat Chrysler. All told, its estimated that BlackBerry's QNX powers roughly 50% of all in-car operating systems globally, which positions the company nicely in what should be another major area of opportunity in the years ahead.

In these ways and more, BlackBerry appears to be back as a resurgent force in the tech sector. With smartphone sales becoming a less pertinent part of the equation, BlackBerry appears well-positioned to vie for a major piece of several key areas of opportunity in tech going forward.

And although its comeback is still by no means a sure thing, it appears BlackBerry might have turned a corner few thought it would or could.