High school student Jewel Moore’s petition for Disney to introduce a plus-size princess has attracted more than 30,000 signatures. Is it time for Disney to listen to its fans?

Last month, Virginia high school student Jewel Moore started a petition on Change.org requesting Disney (DIS 0.85%) to put plus-size princesses in its animated features. Moore, who calls herself a "plus-size young woman," stated that many plus-size women "struggle with confidence" and would benefit from a "positive" role model in the media.

The petition recently attracted more than 30,000 signatures toward Moore's goal of 35,000, indicating that there is clearly interest in Disney breaking its tradition of slender princesses such as Cinderella, Ariel, Belle, Jasmine, and Anna.

Yet just like my previous article on a request for a plus-size Barbie, Moore's petition has been divisive -- while some have praised her efforts, others have expressed concerns that young girls shouldn't be "idolizing" plus-size princesses.

Just what is the 'average' for today's American woman?
Moore and her supporters might argue that Disney's princesses should be proportioned more like the average American woman, but we should first consider what "average" means today.

Meanwhile, the number of obese women (defined as a body mass index of over 30) in the United States rose from 25% in 2012 to 26.3% in 2013, according to a Gallup Healthways poll. America also remains the second most obese nation in the world after Mexico.

However, a whopping 60% of American women reportedly identify themselves as "plus-size" -- indicating that some plus-size women are neither obese nor heavier than the average woman. It also indicates that the "average" American woman has body image issues caused by the media's promotion of slender models. 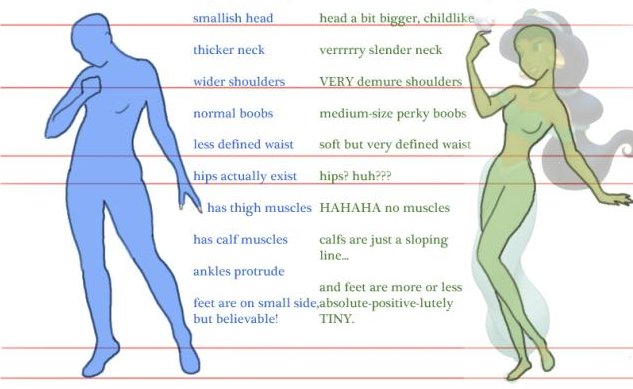 It's true that Disney princesses are impossibly thin, clearly lack muscle tone, and have tiny feet, but Viguet's comparison overlooks the fact that many animated characters are stylized for visual flair and more dynamic animation. For example, no one criticizes The Simpsons, South Park, or Family Guy for being too unrealistic.

More importantly, critics of Disney's art style ignore the influence of Japanese anime, which often uses simple, stylized characters with large eyes and slender frames. Glen Keane, the animator of The Little Mermaid, The Rescuers Down Under, Beauty and the Beast, Aladdin, and Tangled, cited anime as a "huge influence" on his work over the past two decades in a 2010 interview at Radio Free.

Disney's Frozen, which grossed $980 million worldwide on a production budget of $150 million, clearly continues this tradition with princesses with oversized eyes, slender frames, and tiny wrists and ankles.

Were Anna and Elsa intentionally drawn this way to emphasize an impossible standard of beauty to young girls? Were they designed so animators could add more fluid animation and more vivid expressions? Or was it little bit of both?

'Only bad witches are ugly, Dorothy.'
Disney "princess" films are usually based on famous stories, legends, and fairy tales. The cartoons employ many of the same conventions of the original tales -- such as a handsome prince and the power of a true love's kiss -- while omitting the darker details of the original stories.

At the end of The Little Mermaid, Ariel doesn't dissolve into the sea like in Hans Christian Andersen's original tale. In The Hunchback of Notre Dame, neither Quasimodo nor Esmeralda perish as they do in Victor Hugo's literary masterpiece.

Disney steers clear of these dark twists for two obvious reasons -- the films are aimed at children, and sad stories don't make marketable franchises. However, in the course of sanitizing these tales, Disney turned these tales into simple, black-and-white battles between good and evil. With the shares of gray all gone, beauty becomes associated with the virtuous, while ugliness becomes evil. This is seen repeatedly in Disney's thematic conflict between the evil, ugly witch and the innocent, beautiful princess.

This Disney tradition was mocked perfectly by DreamWorks Animation's (DWA) Shrek films -- which portrays the beautiful princess turning into an ogre, rather than the other way around.

Is it time for Disney to update its world view?
Yet that doesn't mean Disney wants to be stuck in its ways.

In Frozen, directors Chris Buck and Jennifer Lee poke fun at Disney's tendency to stick with conventions -- (spoiler alert!) the charming prince turns out to be a dastardly villain, and true love's kiss isn't the deus ex machina solution it's believed to be. They're cute twists that don't slam Disney's entire animated history, which the Shrek franchise had a tendency to do.

Disney recognizes the importance of its Disney princesses to young girls. Over the past 22 years, Disney has diversified the group with women of color, such as Jasmine (Aladdin, 1992), Pocahontas (Pocahontas, 1995), Mulan (Mulan, 1998), and Tiana (The Princess and the Frog, 2009).

Therefore, adding a plus-size princess to the mix might not be a bad idea after all. However, Disney would need to resist the temptation to turn the plus-size girl into a size 0 princess with a simple kiss of a handsome prince.

What do you think, dear readers? Should Disney consider introducing a plus-size princess to broaden its appeal to American girls? Please share your thoughts in the comments section below!