But the series will have much to prove in today's crowded superhero space.

What do we know so far? Heroes Reborn will arrive in 2015, and according to Comcast's follow-up press release it'll be in the form of a 13-episode, stand-alone arc whose storylines and characters are being kept under wraps.

But fans won't be completely in the dark before then; before the premiere, NBC will also take a page out of Disney's (DIS -2.21%) Guardians of the Galaxy playbook by launching a digital series to "introduce the characters and new storylines." Note the wording of that sentence, which leaves room both for new names to enter the picture and for the show's existing characters to reprise their roles.

And "stand-alone" is key, since it seems the last time many people truly enjoyed Heroes was in its stellar first season, during which it dominated as television's No. 1 new drama with an average audience of 14.5 million viewers per episode.

Return of the Kring
Things started to fall apart in season two, however, when a strike from the Writer's Guild of America effectively forced Heroes creator Tim Kring to make do with just 11 episodes, down from the 24 NBC originally ordered. As a result, viewers were left with an obviously fragmented series of storylines thrown together in an effort to start fresh the following season.

But the damage had been done, and for the remainder of its run Heroes' viewership looked decidedly less heroic with every passing episode. Keeping in mind season three was comprised of the third and fourth creative volumes, here's how Heroes fared until its cancellation in May 2010: 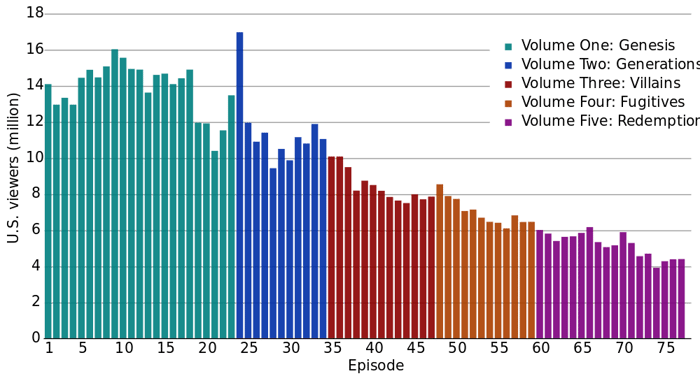 Now Kring is back on board with a chance for the ultimate do-over, and I know I'm not alone in hoping he succeeds with Heroes Reborn.

But we also need to keep in mind Heroes Reborn will enter a drastically more crowded space than the one in which its predecessor had to deal. This time, Kring's show will battle for ratings supremacy with the likes of the recently renewed Arrow and its upcoming spin-off, The Flash -- both will appear on The CW, which is co-owned by CBS and DC Comics parent Time Warner (TWX) -- and Disney's popular Marvel's Agents of S.H.I.E.L.D.

If that wasn't enough, earlier this month Time Warner sealed a licensing-rights deal enabling the folks at Fox to tell the story of Bruce Wayne through Gotham.

Heck, even NBC appears to be hedging its bets, given last month's order for the pilot of Constantine, an adaptation of DC Comics' Hellblazer titles.

Can Heroes Reborn really win?
That doesn't mean more than one superhero show can't succeed. To the contrary, and especially given the increasing household penetration of DVRs, there are more than enough fanboys (and fangirls) who will continue propping up several titles in the genre simultaneously.

Despite its declining influence, however, live viewership is still important for luring advertisers. As a result, Heroes Reborn will need to work that much harder to differentiate itself and prove to viewers it's worth defecting from another show to which they've growth accustomed.

Take Disney's Agents of S.H.I.E.L.D., for example, which consistently ranks as Tuesday's No. 1 show, ahead of both NBC's The Voice and CBS' NCIS -- but only after accounting for a massive boost from DVR viewership in its live-plus-seven-day ratings. But if you just look at headlines, which focus on Agents of S.H.I.E.L.D.'s live-plus-same-day numbers in isolation, you'd be forgiven for thinking NCIS is the more popular show by a wide margin.