Shares of E-Commerce China Dangdang (NYSE:DANG) are up an amazing 44% in the past five days, after the company reported a significant improvement in earnings. Founded in 1999, Dangdang -- which, like Amazon.com, started by selling books online -- is the largest book retailer in China, both in terms of revenue and selection.

Despite its focus on books, in the past few years the company has expanded into select general merchandise products, including fashion, apparel, home, and lifestyle products. The company even opened a marketplace program in order to expand its selection of productions. Naturally, such moves also exposed Dangdang to more competition. The e-commerce space in China is currently dominated by Alibaba's Taobao, and there are several middle-sized players fighting for market share, such as Vipshop Holdings (NYSE:VIPS) and LightInTheBox. In this fierce context, how does Dangdang plan to continue increasing top line? 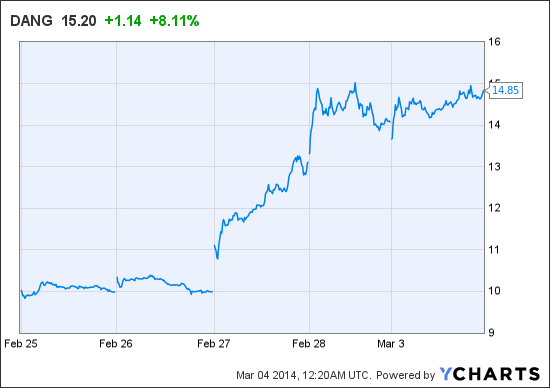 Full expansion
To compete against major e-commerce players, Dangdang knew it had to go beyond books, and provide a full selection of general merchandise.

The company started its expansion by expanding the selection of its official store, and then released a marketplace platform for third-party vendors. Finally, it even opened a flash sales channel in early 2013, probably motivated by the massive success of Vipshop Holdings, and the lack of well-developed physical discount chains. Vipshop is a leading online flash sales employing a discount retail model in cooperation with more than 5,800 brands and partners.

Expansion strategies tend to have plenty of risks. Luckily for Dangdang, the company had developed a strong reputation for quality service and fast delivery over 15 years of selling books online. In Sept. 2013, Dangdang had actually one of the lowest complaint rates among Chinese e-commerce websites. Its 6.73% rate was well below Taobao (17.31%), which is more likely to receive complaints as it has a massive database of third-party vendors.

A great quarter
Dangdang's expansion plans, combined with the company's strong reputation, are yielding good results. On Feb. 27, the company announced a small profit for the first time in 11 quarters, driven by a 22% increase in its top line from a year earlier. Revenue for the fourth quarter of 2013 came in at $325.7 million, well above the company's consensus of $282.9 million. Likewise, the company acquired over three million new customers just in the fourth quarter of 2013, at a lower cost per customer than other quarters.

The financial and user metrics results came in well above the Street's consensus, as according to Bloomberg, at least six analysts had projected a net loss and lower sales for this quarter.

Beyond books
The company's long-term expansion strategy is the key growth driver. Basically, Dangdang's marketplace delivered strong financial results, with apparel and fashion accounting for over half of the marketplace's gross merchandise volume. Moreover, the combined general merchandise sales from both Dangdang's official store and its marketplace surpassed those of books and media for the fifth consecutive quarter. The company's flash sales channel also performed well, and management announced it will add new categories to this channel, such as cosmetics and consumer electronics.

From now on
As the company continues expanding, it expects to see a year-over-year growth rate of 30% for net revenue in the first quarter of 2013. It expects the gross merchandise volume of its marketplace to double. Finally, it should be noted that the company will see a positive impact of a change in tax rules.

Final Foolish takeaway
Dangdang's expansion strategy --which included releasing a marketplace and opening a flash sales channel -- is finally paying off. The company managed to post a profit for the first time in 11 quarters. In the most recent earnings call, Dangdang showed us that the combination of a strong brand, an aggressive long-term expansion strategy, and patience can be overwhelming.