Please ensure Javascript is enabled for purposes of website accessibility
Free Article Join Over 1 Million Premium Members And Get More In-Depth Stock Guidance and Research
By Jacob Meredith - Mar 4, 2014 at 11:56AM

If Pinnacle can overcome a couple of obstacles, they could see great appreciation in their stock's value.

On March 6 we will get to take a look at the full year earnings of Pinnacle Foods (NYSE: PF) for the first time since becoming a public company again. After taking Pinnacle private in 2007, Blackstone Group, L.P., a private equity firm, brought Pinnacle public with a March, 2013 initial public offering.

Pinnacle announced on February 3 that they expect earnings to be in the range of $1.53 to $1.57 per share (excluding certain items) for the fiscal year 2013, again reaffirming earlier estimates. This could be a good buying point. Pinnacle has outperformed the broad market since its IPO, and it could very well continue to do so. 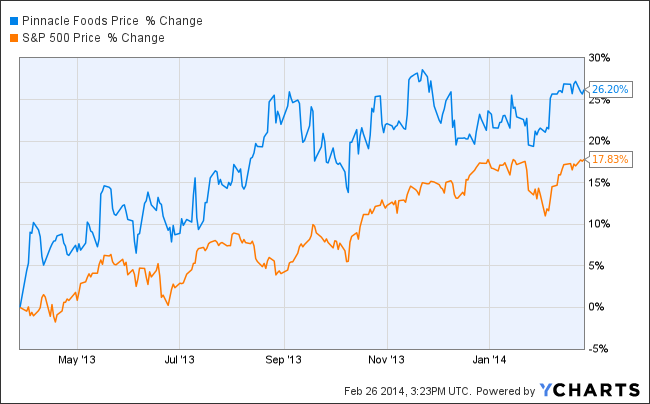 Pinnacle manufactures and sells a variety of household food brands. From Birds Eye frozen foods, to Mrs. Buttersworth's syrup and pancakes, to Vlasic pickles, the list goes on. Pinnacle has 12 brands with in the top four of market share for their respective industry category, nine of those twelve are either number one or two.

Pinnacle competes in the North American convenient food market. At approximately $2.5 billion in annual sales, Pinnacle is a small player compared to others such as Kraft Foods and General Mills. However, Pinnacle estimates to have its products in 85% of American homes, has been creating a leaner structure, and is trading at attractive levels.

Over the past couple of years, Pinnacle has worked to slim down operations. They have consolidated multiple plants and research facilities, as well as decided to exit the low margin, un-branded pickle market . These decisions have come at a cost though, and investors should expect to see restructuring charges because of these actions.

The private years
Through their years as a private company, Pinnacle was saddled with high debt and high interest expense. Interest expense was typically the biggest expense on each year's income statement. Then debt increased even more heavily in 2009 due to an acquisition of the Birds Eye brands.

There was promise in those years as well, as adjusted EBITDA (earnings before interest, taxes, depreciation, and amortization) grew from $231.4 million in 2007 to $449.7 million in 2011. This shows us the efficiency has increased and management is capable of growing earnings.

The numbers
I believe it is fair to compare Pinnacle to B&G Foods ( BGS 0.54% ) and J.M. Smucker ( SJM -0.26% ) due to the size and scope of all their operations. J.M. Smucker is the largest company, sporting a market capitalization of around $10 billion, Pinnacle is next at a little over $3 billion, then B&G, who's capitalization is a touch over $1.5 billion.

Pinnacle has had some truly ugly numbers due to its debt burden and because this industry is almost a commoditized field. Looking at other companies in the same field can give you a general expectation of what a company's potential is. J.M. Smucker has been growing steadily over the last ten years, approximately tripling their revenues and earnings since 2004. They have been doing this with fairly consistent net margins averaging over 8%, which is good for a company in such a highly competitive industry .

B&G Foods has also had impressive growth over the last ten years, doubling their revenues since 2004. Along with top line growth, they have grown their earnings by over five times, helped along with improved margins . B&G has averaged lower profit margins compared to J.M. Smucker, around 5%, but their margins have been increasing steadily over the last few years.

Now taking a look at Pinnacle, the picture isn't nearly as rosy. For the first nine months of 2013, Pinnacle had a net profit margin of under 2%, again weighed down by a large interest expense. However, in April 2013 when they went public Pinnacle used proceeds to restructure. Long term debt at the end of Q3 2013 stood at $1.97 billion, having decreased by $600 million from a year before.

Forward looking
After seeing Pinnacle's headwinds you may wonder why the company should be on your investment radar, so let's take a look forward. Pinnacle is still majority owned by Blackstone Group, L.P., so we can be confident in continued efforts to cut costs and increase margins. Pinnacle has also made efforts at continued growth, their latest attempt being an acquisition of Wish-Bone salad dressings from Unilever PLC, announced in August of 2013. This deal again added debt to the balance sheet, but it brought a top three brand in the salad dressing category that has high margins and growing sales.

Pinnacle is on the right path to begin cutting down debt and interest expense, therefore improving margins. If Pinnacle can achieve a level of margins that is even half of their competitors, their earnings per share could easily double, which could do wonders for the stock's price.

There is still considerable risk in this company due to the heavy debt load, and this debt is not going to disappear overnight. However if you can buy a piece of Pinnacle now, and stick with them for the long haul as they continue to improve over the next several years, it could be well worth the wait.