Eli Lilly's (NYSE:LLY) received bad news this week with the FDA opting against its SGLT-2 targeting diabetes drug empagliflozin. But what's really frustrating is that the FDA's denial wasn't tied to deficiencies in study sites, data presentation, or efficacy. Instead, it was based on a failure from Lilly's partner Boehringer Ingelheim to address FDA concerns about a manufacturing facility producing the drug.

A delay, for now
Eventually empagliflozin will get another shot at winning over regulators, but not before the FDA is quite certain that Boehringer has gotten its plant situation sorted out.

If the FDA's concerns end up delaying a verdict on empagliflozin beyond 2014, there's a chance Lilly could miss yet another approval target. Last year, Lilly failed to win any approvals after predicting it would win two. This year, it has predicted "several" FDA wins.

In addition to missing its approval target last year, and risking coming up short this year, Lilly is also ratcheting down investors' outlook. In January, for example, the company lowered its 2014 sales target to between $19.2 and $19.8 billion just months after guaranteeing sales wouldn't slip below $20 billion. That's a big drop from more than $24 billion in 2011. 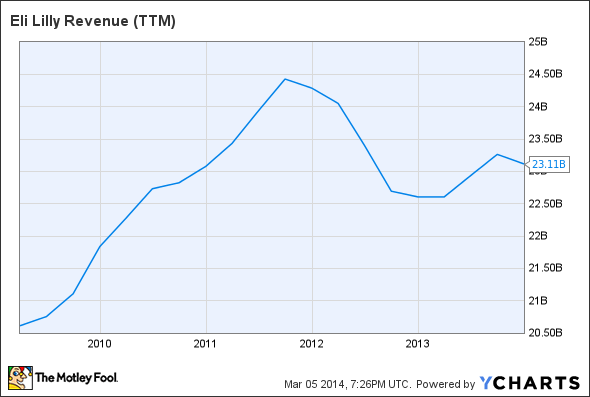 A busy street
Even if empagliflozin does eventually get the FDA go-ahead, it remains unclear whether the drug can gain enough share to blunt the impact from Cymbalta's high profile patent expiration.

Cymbalta, which lost exclusivity in December, was racking up $5 billion in annualized sales for Lilly. And while Cymbalta only faced-off with generics for less than a month last quarter, sales of Cymbalta declined 38% to $883 million in Q4. Since branded sales typically slump between 70% and 90% once generics hit the market, Lilly is going to need more than empagliflozin's approval to get back revenue back on track.

That's because the SGL-2 diabetes market is already crowded. AstraZeneca (NASDAQ:AZN) recently won approval for its SGL-2 compound Farxiga, which will compete against Johnson & Johnson's (NYSE:JNJ) Invokana. Analysts see potential Farxiga peak sales ranging from $600 million to over $1 billion, while Invokana could peak at $650 million. Regardless of how much elbow room empagliflozin can win against Johnson and AstraZeneca, it won't approach $5 billion in sales -- analysts are guiding closer to $1 billion.

Other opportunities
It's not all a lost cause for Lilly. The diabetes market is getting far bigger, not smaller. Projections peg spending on diabetes will head from $113 billion to $336 billion over the next twenty years as companies introduce new, pricier therapies to address a larger patient population. Unfortunately, estimates suggest the number of diabetics globally will jump from 366 million in 2011 to 552 million in 2030.

That means there's lots of plenty of money up for grabs for compelling therapies. Angling for some of that spending will be GLP-1 targeting compounds like Sanofi's (NASDAQ:SNY) Lyxumia, which is already being sold in Europe, but has yet to be filed for approval in the U.S., and Novo's (NYSE:NVO) Victoza. Sanofi hopes Lyxumia can offset some of the risk to its multibillion blockbuster diabetes drug Lantus when it loses patent protection in 2015.

At the same time, Lilly hopes its GLP-1 prospect dulaglutide can carve away a healthy piece of business from those drugs, as well as win away scripts from AstraZeneca's Byetta and Bydureon too.

Fool-worthy final thoughts
Lilly has its fair share of hurdles to overcome due to Cymbalta's sliding sales. That makes the FDA's pass on empagliflozin even more troublesome. .

Investors can take some solace in the company's dividend yield, but without new products it's unlikely the dividend payout will climb. That suggests Fools should pay close attention to dulaglutide, especially now that empagliflozin is on the FDA's back-burner.

Editor's Note: A previous version of this article referred to manufacturing problems of a specific empagliflozin API at the Boehringer Ingelheim facility. The Fool regrets the error.