Pandora Media (NYSE:P) and I go way back.

I've been following the company loosely since its 2011 IPO. However, in the last six months or so, my concerns over Pandora have intensified my focus from casual observation to deep interest. Many investors have their quirks, and it's starting to seem that this infatuation with Pandora might be mine.

However, as I've highlighted in the past, I also believe the Pandora storyline has been in many ways underappreciated. Because as the company highlighted again for investors recently, Pandora's growth story appears to be losing steam, and fast.

A February to forget for Pandora
I've commented on the gradual decline in Pandora's user growth in the past. In keeping with that worrisome trend, Pandora once again posted disappointing user statistics for the month of February.

All told, Pandora only increased its number of hours of streamed music by a paltry 9% in February. On an only slightly more positive note, Pandora expanded its number of active listeners by 11%. And although its growth is slowing at an alarming rate, these two factors did help to expand Pandora's share of the overall U.S. radio market from 8.25% last February to 8.91% this February.

Take a look at how some of these key figures have essentially flatlined over the last two years. 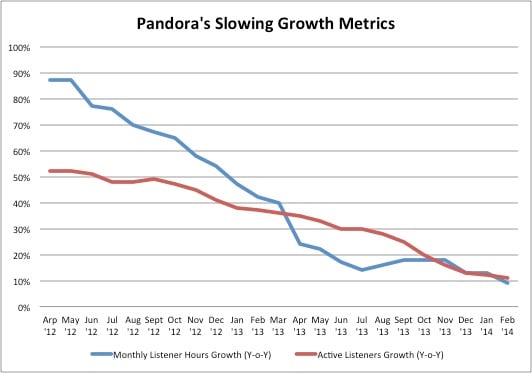 This chart certainly raises some serious concerns for Pandora. However, there's an entire additional facet of the Pandora story that some argue should offset Pandora's present growth issues, which also deserves ample consideration.

Monetization matters just as much as growth
The sell-side community rallied around Pandora in the wake of this disappointing report. In surveying the commentary analysts had to offer in support of Pandora, I noticed several research notes arguing over "the more important trends to monitor as Pandora continues working to take share within the $12bn local radio market."

This clearly makes sense in a way. It's true, Pandora has put an increased emphasis on expanding its local ad-sales force in large radio markets. In doing so, Pandora should be able to offer more relevant local ads for its listeners, which should drive improvements in the rates Pandora can charge for those ads. We've seen some of this in the past, and its increased monetization efforts are a key component in truly trying to understand the total opportunity set Pandora presents to long-term investors.

Because of its geographical limitations, AM and FM radio advertising is inherently a decidedly local market, as the analyst above shrewdly noted. And while a $12 billion market opportunity isn't anything to sneeze at, Pandora will have to continue to also expand its user base to grow its share of this space. Although it's not a perfect comp, Pandora's 8.91% of the U.S. radio market illustrates it's still relatively early in its penetration of the overall radio market. And that's why single-digit user growth should have alarm bells ringing for investors today.

The real problem at Pandora
The real point I keep trying to highlight isn't that Pandora's business model doesn't work. Radio advertising is an established and profitable business.

However, with Pandora's user growth continuing to slow and its still limited presence in its target markets, Pandora's valuation appears to be light years ahead of its short-term, or even medium-term, business prospects. Trading at over 10x revenue, Pandora's almost priced for perfection, but that simply isn't the reality we see materializing in its monthly users numbers.

And that's something investors would do well to take into account sooner rather than later.