Illinois Tool Works (NYSE:ITW) is always one of the most interesting industrial companies to follow because it has broad exposure to the industrial economy. In particular, Foolish investors in peers like Johnson Controls Inc. (NYSE:JCI) and 3M Company (NYSE:MMM) should take note, while Fools invested in industrial supply companies like WESCO International Inc. (NYSE:WCC) and Fastenal Company (NASDAQ:FAST) will surely have an interest, too.

A quick look at Illinois Tool Works' revenue by end market reveals how diverse its end-market customers are. Even within the automotive segment, it sells into a mix of original equipment manufacturers and aftermarket customers. It's a similar story within its construction (residential, commercial, and renovation) and its food (institutional, service, and retail) sales, too. 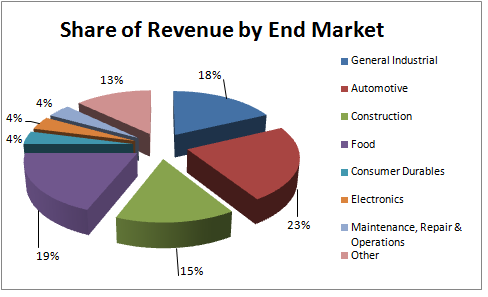 Not only, are its end markets diversified, but its segment sales are too. In fact, the variance in operating income contributions from its operating segments is relatively low. 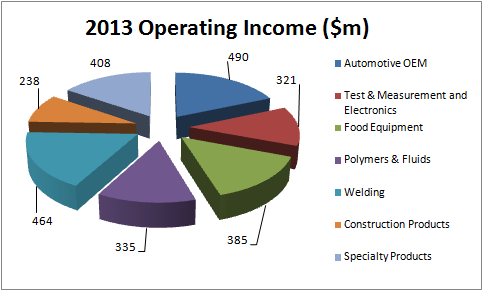 The particular strength in automotive original equipment manufacturers (revenue up 12.4%) will be well received by Foolish investors in a company like Johnson Controls, which has strong automotive and construction exposure. Johnson Controls is favorably exposed to some positive-looking sectors of the economy in 2014, and just like Illinois Tool Works, its managing to achieve growth in excess if its industry.

Key takeaways from Illinois Tool Works' results
The two things that stand out the most from its fourth quarter results are:

Despite full-year revenue declining 4.4%, the company managed to grow operating income by 1.6%. Indeed, the trend of generating operating margin expansion is clearly in place, because its fourth-quarter revenue rose just 4.8% (with 2.8% organic), but operating income margin increased by 270 basis points, resulting in an impressive 19.8% growth in operating income.

Moreover, management guided toward 2%-4% revenue growth in 2014, with 2%-3% coming organically. However, diluted EPS is expected to rise by 18%-24%, and on the conference call, CEO Scott Santi said that "we expect all of our operating segments -- operating margins in '14 to be better than '13".

Conservative guidance?
In a way, it's a similar story to the challenges faced by other industrial conglomerates, such as 3M Company. In common with Illinois Tool Works, 3M Company has a lot of businesses exposed to short-cycle sales. However, 3M Company was recently forced to guide its 2014 full-year sales growth toward the "low-end" of its previous guidance of 8%-11%, partly due to weaker conditions in Latin America.

Therefore, it's somewhat puzzling that Illinois Tool Works' management guided toward only 2%-3% organic growth for 2014 when it reported 2.8% organic growth for the fourth quarter. Furthermore, Illinois Tool Works had a strong quarter in South America with revenue up 15% in the region. Frankly, its full-year-revenue guidance looks conservative. On the conference call, its management outlined the thinking behind it: "Well, I think the overall framework, and we've talked about this in New York in December, was our model is we're going to forecast based on demand rates that we're seeing now."

This approach seems sensible given the limited visibility that any industrial company has with short-cycle sales, but Foolish investors also need to consider one important factor. It's been a tough quarter for manufacturing with extreme bad weather affecting industrial supply companies like WESCO International and Fastenal Company. WESCO missed estimates, but it could be set to bounce back, while, Fastenal managed to miss an estimate that it gave in December! Clearly, conditions deteriorated at the end of the year.

So is Illinois Tool Works' now giving conservative guidance because it's based on a weather-affected period's trading?

The bottom line
While, it's easy to conclude that the guidance looks conservative, Foolish investors also need to appreciate that there is little else that its management can do under the circumstances. The really positive point is that it's generating strong margin expansion, and free cash flow conversion came in at $2.16 billion in 2014 (representing conversion of 129% of net income); approximating to around 5.7% of its enterprise value. While this looks attractive, this kind of cash flow conversion may not be repeated in future years. 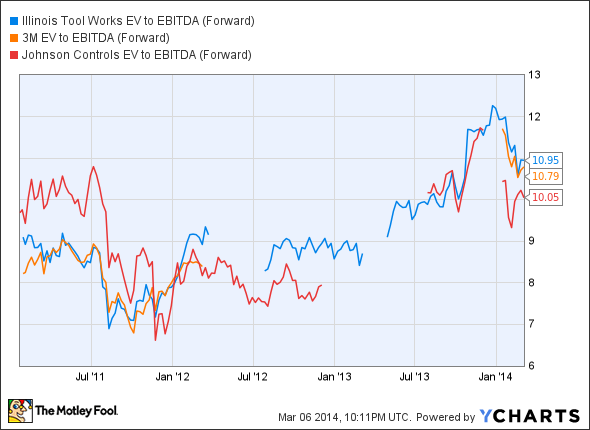 Investing Fools might be advised to wait for an entry point, or at least some indication that the thesis behind its conservative-looking guidance is correct... or not.