Captain America: The Winter Soldier hits theaters in a little less than a month. It will expand Disney (NYSE:DIS) and Marvel's enormous superhero universe and, according to one studio executive, the Cap's latest adventure has "much more" of a connection with the next Avengers movie than Thor: The Dark World or Iron Man 3. That, and a few other reasons, have me convinced that this "Captain America" film could be Marvel's next billion-dollar film... despite what fellow Fool Daniel Kline may have you believe.

1. Fans literally cannot miss it
The quote above is from Marvel Studios President Kevin Feige, who recently told ScienceFiction that The Winter Soldier will introduce "a very big idea" to the ongoing Marvel Cinematic Universe that "impacts everything." As the MCU continues to progress through its second phase, each installment is becoming more important in terms of story development.

Although rumors of Nick Fury's demise probably won't come to fruition, it's no secret S.H.I.E.L.D. will have a major role in The Winter Soldier. That means more screen time for fan favorite Black Widow, and it's a net positive given the organization's absence was considered by some to be a weak spot in last year's Thor: The Dark World.

The Winter Soldier will also be the first time an MCU-related movie directly connects with Marvel's small-screen series Agents of SHIELD. As Leo Sun recently wrote, the TV show "is really just a weekly 43-minute commercial for its upcoming feature films." That bodes well for The Winter Soldier, regardless of whether Agents of SHIELD can beat NCIS or The Voice in the Tuesday night ratings race. This is something that Mr. Kline forgets.

2. The film has a fresh feel
The Winter Soldier is likened to an action flick mixed with a political/espionage thriller, and as Feige told MTV, "We [Marvel] make a lot of superhero movies here ... and I believe the key is to make them all different ... while connecting [them] together." A fresh feel could alleviate worries that MCU films are becoming stagnant, something that plagued the latest "Thor" film. Critical success may not make or break how well the newest "Captain America" does at the box office, but it could certainly help fringe fans jump on board.

3. The Avengers bump doesn't hurt
It remains to be seen if the titular villain will draw audiences, but the so-called "Avengers bump" could help The Winter Soldier surpass the billion-dollar mark. 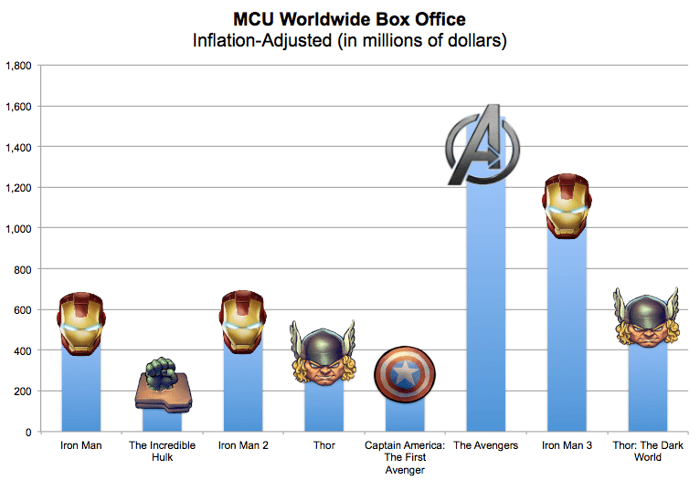 After The Avengers' massive haul of more than $1.5 billion in 2012, Iron Man 3 made 95% more at the box office than its predecessor. Thor: The Dark World, meanwhile, experienced a sales spike of over 40%. As this graph illustrates, the MCU behaves not unlike a snowball -- the more films it pumps out, the more fans it reels in.

If The Winter Soldier is to pass $1 billion, it will need to generate roughly 160% more in ticket sales (accounting for inflation) than the first Captain America. That's more possible than you may think.

The bottom line
If The Avengers did anything, it proved that there are more than enough fans willing to pay for a Marvel film to justify a billion-dollar box office take. The third "Iron Man" reiterated this point, and while the latest "Thor" fell short, next month's Captain America: The Winter Soldier is in many ways the superior MCU installment.

The involvement of S.H.I.E.L.D. is a big plus, and promises of a crucial plot point may force fans to watch. A stylistic change is also something that could appease critics, and the Cap's role as the linchpin of the Avengers -- remember, he was the first -- should not be overlooked. Two of Marvel's past three movies have made over $1 billion, and if all goes according to plan, Captain America: The Winter Soldier can make that three out of four.

Regardless of which of us is right, the profits are likely to keep rolling for Disney, pretty much as they have since the Fool's David Gardner recommended the stock in June 2002. Readers who followed his advice back then are enjoying returns of an incredible 4,009%!

David's shown time and time again that he can find successful, disruptive companies with stock returns like 926%, 2,239%, and 4,371%. In fact, just recently one of his favorite stocks became a 100-bagger. And he's ready to do it again. You can uncover his scientific approach to crushing the market and his carefully chosen six picks for ultimate growth instantly, because he's making this premium report free for you today. Click here now for access.