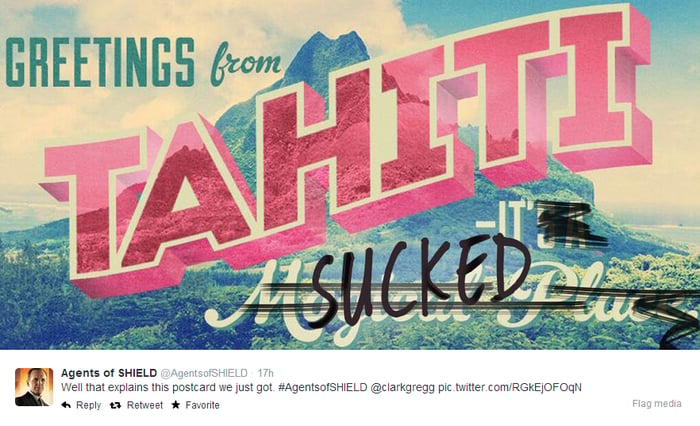 Go ahead, I dare you: Just look me in the eyes and say with a straight face last night's episode of Disney (NYSE:DIS) Marvel's Agents of S.H.I.E.L.D. wasn't a blast.

Titled "Yes Men," episode 15 featured the series' second -- and easily most significant -- big movie crossover so far, guest starring Thor: The Dark World's Jaimie Alexander as Lady Sif. Her appearance was brilliant, giving audiences a deeper, more personal look at the character as Sif enlisted the help of Coulson and his team to hunt down fellow Asgardian Lorelei.

The episode's novelty also achieved one of Disney's goals, resulting in a 5% week-to-week increase in total viewers to 5.8 million. That translated to an 11% core ratings boost over last week to a 2.0 for adults 18-49, helped by a massive 25% spike in young adults 18-34.

What's more, Agents of S.H.I.E.L.D. tied Comcast (NASDAQ:CMCSA) NBC's The Voice with men 18-34 -- no small feat considering The Voice commanded an impressive 13.14 million viewers during the same hour, good for a night-topping 3.4 rating in adults 18-49. The Voice also had novelty on its side, as Comcast and NBC brought the singing competition back last week for the first time since October. Nonethless, Disney and ABC were quick point out Agents of S.H.I.E.L.D. finished as Tuesday's number one scripted series for its 15th consecutive first-run airing.

It wasn't just the Asgardian
But those of who've watched the episode already know Lady Sif wasn't Agents of S.H.I.E.L.D.'s only highlight. With twists and turns aplenty, the show felt a bit darker than usual last night, and still managed to insert adequate comic relief to keep viewers smiling.

Take Coulson's "It sucked" comment, for example, which not only stood an amusing departure from his typical "It's a magical place" response, but also seemed to mark a significant shift in his agitation surrounding the circumstances of the revivals of both he and Skye.

After quizzing Lady Sif on her encounters with blue-skinned aliens in a fruitless attempt at discovering more about the strange, seemingly dead fellow introduced in last week's episode, Coulson ultimately vows to Skye they'll go after "the person responsible for this" to "make him pay" -- presumably a reference to the now "off the grid" Director Fury. Incidentally, the latter appears to be a nod to Fury's part in next month's Captain America: The Winter Soldier, for which S.H.I.E.L.D. is expected to play a much larger role compared to previous Marvel blockbusters.

Meanwhile, we see Agent Mae as she secretly listens to Coulson's angry dialog through a bug, then calls on an encrypted line to say "He knows. I repeat, Coulson knows." And that's not to mention the newly formed love triangle compliments of Lorelei, who -- without naming names -- revealed Agent Ward may have "desired" Skye over Mae all along.

Put it all together, and it appears Agents of S.H.I.E.L.D. is finally offering the kinds of juicy, intriguing, Marvel-infused story arcs skeptics have requested for months. That should be great both from a ratings standpoint for ABC, and also in helping Agents of S.H.I.E.L.D. be even more effective at fulfilling its broader purpose of building enthusiasm for Disney's massively profitable Marvel Cinematic Universe.

What do you think? Is Agents of S.H.I.E.L.D. proving its worth?