Warren Buffett believes in buying companies for the long haul, so Berkshire Hathaway's (NYSE:BRK.B) positions are usually concentrated bets on businesses that are easy to understand. While Buffett's team, which includes Ted Weschler, has found more companies in finance and consumer goods to own, Berkshire has stakes in three health care companies investors ought to know about.

Its biggest health care bet is on DaVita (NYSE:DVA), a health care services provider benefiting from some interesting expansion plans. Two of his other holdings are mega cap pharmaceutical companies Johnson & Johnson (NYSE:JNJ) and Sanofi (NASDAQ:SNY). All three of these companies have been strong performers this past year, so let's take a look at what's behind their gains. 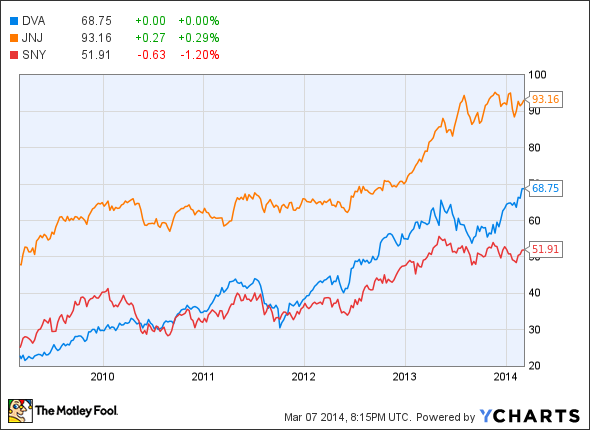 1. DaVita HealthCare Partners
Berkshire's Ted Weschler loves DaVita, but not necessarily because of the pricing power for DaVita's legacy dialysis business. After all, that business has been the subject of constant scrutiny surrounding pricing for more than twenty years.

Berkshire's bet is likely more based on DaVita's opportunity to cut costs by closing unprofitable dialysis centers, expand services within the remaining centers, and serve more people with chronic disease thanks to its 2012 merger with coordinated care company HealthCare Partners.

Dialysis isn't an optional therapy; it's necessary for those with end stage renal disease, or ESRD, that don't receive liver transplants. Since most dialysis patients are seniors, the number of people requiring dialysis is likely to keep growing as baby boomers age. That suggests that if DaVita can close low volume dialysis centers, and boost utilization at its remaining centers, profit margin may grow rather than shrink, in spite of potential price headwinds tied to Medicare reimbursement.

However, while that is intriguing, a much larger opportunity exists in expanding DaVita's HealthCare Partners physician network. That business serves major retirement states California, Florida, Nevada, and New Mexico, which are likely to see their population of seniors jump over the coming decade. As insurers and other health care payers grapple to contain costs, interest in outcome based care rather than transactional care should grow. If so, DaVita is perfectly positioned.

2. Johnson & Johnson
When it comes to producing blockbusters, few big drug companies post as good a record as Johnson. The company has a steady stream of revenue friendly compounds offsetting patent risk, including treatments for HIV, cancer, and autoimmune disease. But Johnson is far more than a prescription drug developer. It also sells over-the-counter products like Tylenol, cardiovascular stents, and knee and hip replacement products.

Sales growth for drugs like Zytiga for prostate cancer, Invega Sustenna for schizophrenia, and Prevista for HIV, helped lift sales in Johnson's pharmaceutical division by 11% to $28 billion in 2013. 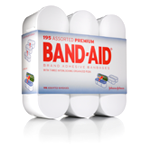 But its medical devices business is actually bigger, generating revenue of $28 billion last year thanks to 22% growth in its orthopedics and 4.6% growth in its cardiovascular businesses. And while sales in its consumer business grew by less than 2% in 2003, the segment's $14.7 billion in annual sales gives Johnson a steady, predictable revenue stream thanks to products like Band-Aid.

All in all, that makes Johnson one of the most diversified plays likely to benefit from global population growth, and the resulting surge in health care spending.

Sanofi also has a slate of high priced drugs for rare diseases thanks to its acquisition of Genzyme in 2011. Genzyme drugs, including Cerezyme for Gaucher's disease, brought in almost $3 billion in 2013, up 26% from 2012.

That means Sanofi is nicely positioned to benefit from both the growing global demand for diabetes treatment, and the growing opportunity to capture sales by treating orphan disease. Spending on diabetes is expected to climb from $113 billion in 2009 to $336 billion over the next 20 years in the U.S. alone.And the market for orphan drugs is expected to grow to $127 billion worldwide by 2018, representing annual compounded growth of 7.4% since 2012.

Sanofi is also willing to make bets on next generation therapies that could revolutionize how doctors treat patients. It has teamed up with Regeneron (NASDAQ:REGN) on intriguing late stage compounds including alirocumab, a PCSK9 inhibiting drug for lowering cholesterol that if approved could capture $3 billion in annual sales. The two companies are also working on sarilumab, a drug for rheumatoid arthritis that put up solid phase 3 results last year.

Additionally, Sanofi's 12% equity stake in RNAi company Alnylam demonstrates its willingness to make investments in emerging technology that could significantly improve how drugs work. Alnylam's RNAi approach delivers drugs directly to their targets, reducing side effects, and improving efficacy. Alnylam and Sanofi have ongoing phase 3 trials under way for patisiran, a drug for familial amyloidotic polyneuropathy.

Sanofi also has exposure to the over-the-counter market thanks to its roughly $4 billion consumer products business that includes allergy drug Allegra; and an animal health business that put up sales of around $2.7 billion last year.

Fool-worthy final thoughts
All three of these companies offer Berkshire broad exposure to stable growth from spending increases tied to a growing global patient population. That predictable growth should drive demand for DaVita's dialysis and coordinated patient care services, Johnson's drugs, stents, and orthopedic devices, and Sanofi's diabetes and rare disease therapies. All three are also all tied more directly into consumers, either through primary care, or through over-the-counter products.

That suggests Buffett wants exposure to health care companies that can succeed in spite of regulatory risk. Regardless, the long term outlook for patient care should translate into shareholder friendly profit growth at each of these companies.