Big cap biotechs Celgene (CELG), Biogen (BIIB), and Amgen (AMGN) have posted impressive gains in the past year that have all three trading at their highest valuation in years.

The iShares Nasdaq Biotechnology ETF ( IBB -2.26% ) has achieved an 81% return since February 2013, a return that trounces the S&P 500 index ETF's 26% return. By any measure, that's an astounding run, but does it signal a bubble has been built that's about to burst?

Let's take a look at three of the biggest biotech companies: Celgene ( CELG ), Biogen ( BIIB -2.65% ), and Amgen ( AMGN 0.96% ). All three have made cork-popping moves in the past year that suggest they might be due for a pause. 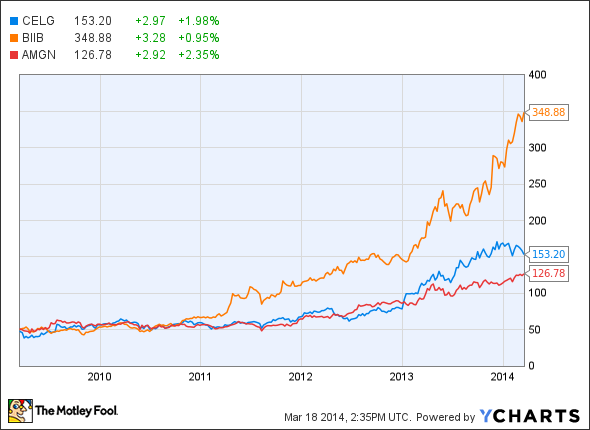 Pricing in perfection?
At all three companies, the price to sales ratio -- which shows how much investors are paying for every dollar of revenue -- are hitting new five year highs. That enthusiasm is tied to each company rolling out new therapies that are driving revenue higher.

Celgene has successfully launched Abraxane, a cancer compound already approved as a treatment for breast, lung, and pancreatic cancers. Abraxane's sales jumped 90% in the past year to $202 million in the fourth quarter. Biogen rolled out Tecfidera last March as its first oral multiple sclerosis drug, and sales of the compound reached nearly $400 million last quarter.   And sales of Amgen's Prolia and Xgeva osteoporosis and cancer therapies were up 41% from last year to $522 million in the fourth quarter. 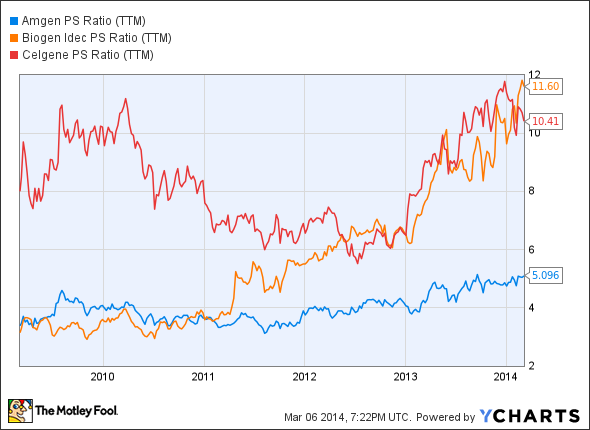 The success of those compounds have investors willing to pay up for earnings too. Biogen and Amgen's trailing 12 month price to earnings ratio are at their highest levels in five years, and Celgene's is at a three year high. 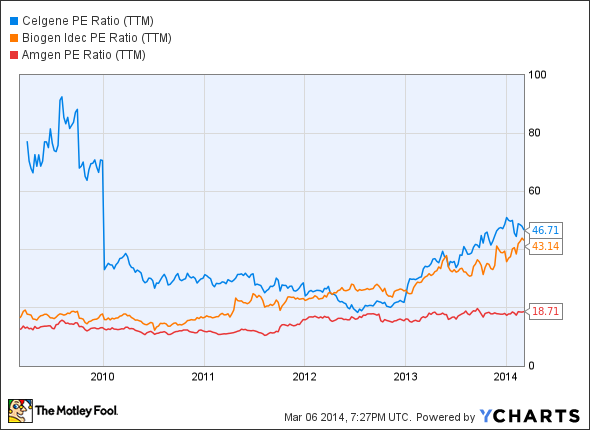 Looking into the future
The price to sales and price to earnings ratios suggest that investors are frothier today than they've been in years. However, both those measures are looking at how investors are valuing the companies on yesterday's results, not tomorrow's. Since markets are forward looking instruments, it may be helpful to instead consider how the three are valued using future sales and earnings estimates that take into consideration the potential for compounds like Abraxane, Tecfidera, and Prolia/Xgeva.

In the case of the companies' forward price to sales ratio, the measure is similar to the historical data, with investors paying more for future sales than they have in five years. But earnings are arguably more important given they're a better reflection of how efficiently companies operate and how likely companies will be to stay shareholder friendly. Unfortunately for bulls, all three companies' future price to earnings ratios are also lofty. To find a similar period where investors were willing to pay as much for future earnings you'd need to go back to the pre-recession peak. That suggests the potential for these fast-growing drugs may already be reflected by current share prices. 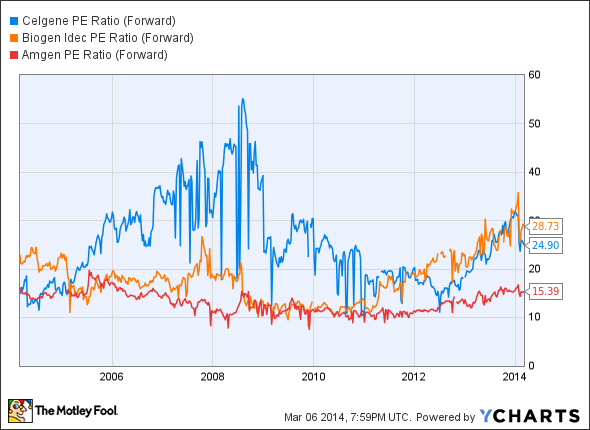 Fool-worthy final thoughts
Celgene, Biogen, and Amgen all appear to be a bit pricey based on where they've been in the past five years, but that doesn't necessarily mean they're in a bubble. No one can predict where the market will go in the short term. After all, markets have a tendency to surprise investors both on the way up and the way down.

That suggests investors shouldn't base their decision on whether to own these companies solely on their valuation, but also on their patent risks, FDA filings, and drugs making their way through their pipelines. If Celgene can successfully usher its potential psoriasis drug Apremilast through the FDA, Tecfidera can win over price hawks in Europe, and Amgen can win approval for a new therapy that could eventually alter how doctors treat high cholesterol, then share prices may not be as expensive as they appear. As a result, investors should not only consider the valuation risk, but also keep a close eye on regulatory filings and approvals before making a decision on whether to sell.