Marvel's Agents of S.H.I.E.L.D. hasn't set the world on fire in its first season, but Walt Disney (NYSE:DIS) and ABC would be smart to let the series survive for at least two more years. Despite what my colleague Daniel Kline believes, Agents' long-term prospects are more appealing than they look.

An hour-long commercial
The most obvious strength of Agents is that it takes place in the Marvel Cinematic Universe, already the second highest-grossing film franchise in history behind Harry Potter. As I've harped on before, Agents' ability to follow S.H.I.E.L.D. -- the unifying force behind the Avengers -- can't be judged on ratings along. Yes, it's probably true that after 12 million people watched the debut, the show has bled viewers quicker than ABC expected. 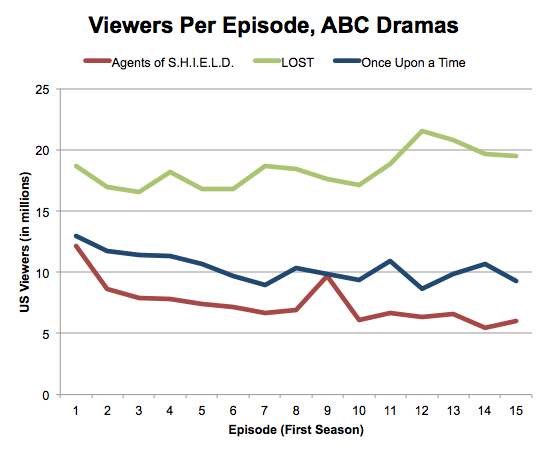 But compared to Once Upon a Time -- another ABC drama currently in its third season -- Agents hasn't performed as poorly as it may look. It's obviously no LOST, but does it need to be?

After all, Agents' real strength is that it serves as an hour-long commercial for the Marvel Cinematic Universe. The Avengers and Iron Man 3 have already demonstrated the franchise can yield billion-dollar box office returns -- the challenge is simply to keep fans interested enough that they keep coming back. Marvel and Disney's staggered film release schedule is one way to boost retention, and Agents fills in the gaps.

Mr. Kline is correct to point out the show's high cost -- its $12 million pilot was more expensive than even LOST and Game of Thrones' first episodes -- but that doesn't mean it should be held to a higher standard. Compared to the enormous marketing budgets of most blockbuster movies, Agents isn't as extravagant as it looks.

Marvel's third phase
The MCU has already wrapped up Phase One, and with Captain America: The Winter Soldier set to hit theaters next month, it's smack dab in the middle of Phase Two. After Avengers: Age of Ultron in 2015, Phase Three will commence with the third Captain America one year later.

Because of Nick Fury and Black Widow's close ties with the Cap, I expect S.H.I.E.L.D. to remain involved in at least a limited capacity, meaning it would be prudent to keep Agents on the air until 2016. Marvel recently announced the film will square off against Batman Vs. Superman two summers from now, meaning Phase Three will need all the firepower it can get.

The bottom line
Critics of Agents of S.H.I.E.L.D., including Mr. Kline, aren't wrong to say the show has disappointed in the ratings department. But calls for its cancellation ignore the main reason ABC began airing the show in the first place: to broaden the Marvel Cinematic Universe.

Agents probably won't become as popular as LOST was, but that's O.K. It should continue to feature S.H.I.E.L.D., and in my humble opinion, it wouldn't hurt to rope in more characters from the films. Whether that means a Season Two appearance from Captain America or Black Widow, a high-profile cameo could be the shot in the arm the show needs.

Dan Kline disagrees with pretty much everything I wrote. Click here for his take.