AbbVie's (NYSE:ABBV) Humira, used to treat common autoimmune diseases such as psoriasis and rheumatoid arthritis, is one of the planet's best selling drugs. Humira's success has attracted a host of new therapies hoping to win away market share, including Johnson & Johnson's (NYSE:JNJ) Stelara, and Celgene's (NASDAQ:CELG) recently approved Otezla.

Otezla, or apremilast, got the FDA go ahead in active psoriatic arthritis patients last week and, in a bid to make Otezla a blockbuster, Celgene has priced the therapy roughly in line with Humira and lower than Stelara. 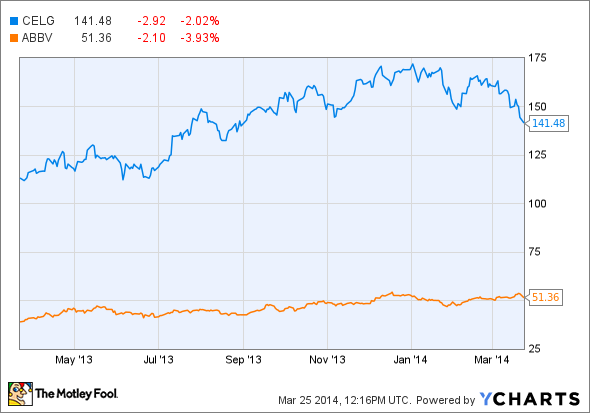 A new treatment approach
Celgene hopes Otezla can continue a string of successful launches designed to diversify the company away from its top selling myeloma drug, Revlimid.

Those launches have included Abraxane, which is approved for non-small cell lung cancer and pancreatic cancer, and Pomalyst, which was approved as a third line treatment for multiple myeloma in February 2013. Those two drugs combined to produce nearly $1 billion in sales for Celgene last year, with Abraxane finishing the year on a pace to potentially reach bockbuster status in 2014.

The sheer size of the market suggests Otezla may have room to carve out a niche and be similarly successful. AbbVie sold $10.7 billion worth of Humira in 2013,and Amgen (NASDAQ:AMGN) and Pfizer (NYSE:PFE), who co-market Enbrel -- another highly successful autoimmune therapy -- notched over $8 billion in sales last year.

Celgene thinks Otezla has a good shot at winning away scripts in the psoriatic arthritis indication from those drugs, as well as Stelara, which had $1.5 billion in sales last year, up 46% from 2012. Celgene estimates Otezla's peak sales may eclipse $1.5 billion by 2017, which would amount to less than 10% of the total sales generated by Humira, Enbrel, and Stelara last year -- although it's important to keep in mind that these drugs also have other indications which generate a lot of those sales.

One of the reasons for Celgene's enthusiasm is what the company believes is a substantial dosing advantage. While Humira, Enbrel, and Stelara are delivered by injection, Otezla is taken orally.

Otezla also offers doctors an alternative mechanism of action, suggesting the drug can serve as a unique alternative for patients whose disease isn't adequately controlled by those other therapies.

Otezla targets phosphodiesterase 4, or PDE-4, an enzyme associated with the inflammation causing joint pain. Humira and Enbrel block tumor necrosis factor, or TNF, and Stelara is an interleukin-12/interleukin-23 blocker.

That different dosing and target appears to offer Celgene another important advantage: the lack of a black-box warning. Humira, Enbrel, and Stelara come with an arguably riskier safety profile requiring ongoing monitoring. That's not to say Otezla is risk-free. Doctors will need to watch Otezla patients' weight given 10% of patients in trials saw weight drop more than 5%, but that is less worrisome to me than the infection risk profile for Otezla's competitors.

Fool-worthy final thoughts
It's going to take at least another quarter or two for investors to get a good feel for how much traction Otezla will gain against Humira, Enbrel, and Stelara. Otezla's March approval doesn't leave much time for Celgene to record sales before its first quarter ends.

However, Celgene has announced sales will begin immediately, so investors may get an early read on demand based on distributor inventory building when Celgene hosts its first quarter earnings conference call in late April.

Further out, investors should be watching closely to see if the FDA OKs expanding Otezla's label to include psoriasis. The agency will make that decision on September 23rd, and if it grants the green-light, Otezla's addressable market would expand from the roughly 37 million people worldwide with psoriatic arthritis to  the 125 million million diagnosed worldwide with psoriasis. That would make Celgene's blockbuster forecast more achievable.