Truck maker PACCAR (NASDAQ:PCAR) has its foot placed firm on the accelerator. Goldman Sachs upgraded its rating on the stock to buy with a price target of $80 last week, representing a solid 20% upside from its closing price Friday.

Now consider the time frame: Goldman expects PACCAR shares to hit its price target over the next 12 months. In a way, that suggests that 2014 should turn out to be a really strong year for the stock, considering that it has already returned 14% year to date, as of this writing.

While I usually take analyst views with a grain of salt, I believe investors should pay close attention to this call from Goldman Sachs.

The road to recovery
The trucking industry is speeding up, and we have proof. As Goldman Sachs says, "Freight fundamentals are overwhelmingly positive entering the sixth quarter of recovery." The American Trucking Association Truck Tonnage Index for February edged 2.8% and 3.6% higher sequentially and year over year, respectively, indicating an uptick in tonnage shipments. Extreme winters slowed things down, but the following chart from ATA suggests that we're in a long bull run. 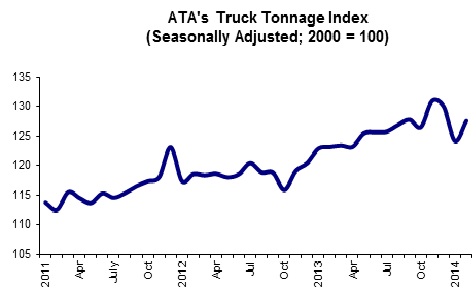 Since freight tonnage largely drives the demand for trucks, February turned out to be a spectacular month. Orders for new heavy-duty (Class 8) trucks jumped 30% year over year, while the medium-duty segment reported 22% surge in orders. More notably, total orders for the three-month period ended February hit an eight-year high.

So Goldman Sachs is rightly betting on stronger freight fundamentals to drive PACCAR's growth. It also helps that PACCAR is gaining traction in the engine market. While it continues to source majority of its engines from Cummins (NYSE:CMI), PACCAR's in-house engines are grabbing more attention than ever.

Making the right noise
An upgraded 13-liter engine and an 11-liter engine for the European market were among the key products that PACCAR launched last year. The MX-13 is already creating a stir.

During its last earnings call, Cummins acknowledged the increasing popularity of the MX-13, and didn't shy from saying that it could even lose some market share to PACCAR in the critical heavy-duty truck engine segment. Now that's certainly something big for the truck maker.

The 13-liter is quickly displacing the 15-liter engines from the market, and emerging as the preferred choice among truckers. And it isn't just the diesel variant that I'm talking about. Westport Innovations (NASDAQ:WPRT), an expert in natural gas engine technology that also counts PACCAR as an important customer, dumped its 15-liter LNG engine last year. Westport is now about to launch a 13-liter natural gas engine for the North American market this year, in partnership with Volvo.

Stepping on the gas
PACCAR isn't resting on its laurels with the MX-13, and is visibly excited about the future. It is even toying with the idea of manufacturing its own 13-liter spark-ignited engine if Cummins-Westport's recently launched ISX 12G goes on to be a hit. And I wouldn't be surprised to see a PACCAR natural gas engine some years down the line, given the way the company is expanding the alternative fuel offering in its fleet.

Just earlier this week, PACCAR extended the Cummins-Westport ISX 12G engine to its popular Kenworth T680 model, even as it unveiled the T680 Advantage concept that combines the power of an MX-13 with Eaton's automated transmission. The T680 was awarded the American Truck Dealers Heavy-Duty Commercial Truck of the Year award last year. PACCAR's other top brand, Peterbilt, will also start offering the ISX 12G on its latest truck models -- the 579 (on highway) and 567 (vocational). PACCAR wants to make sure it remains the leader in the natural gas-powered truck market.

Did you know this?
I'm expecting PACCAR to churn out another good year after achieving record revenue in 2013. Critics aren't too happy with the company's cash flow trend -- PACCAR generated free cash flow worth $500 million in 2013, less than half its earned net income. But let's not forget that the company had some major capital expenditures last year, including new launches, opening of a DAF truck factory in Brazil, and setting up parts distribution centers in Netherlands and Brazil.

Getting the DAF nameplate into Brazil is a particularly big opportunity, especially as the nation gears up for the FIFA World Cup and the Summer Olympics 2016. Did you know that DAF is one of the leading truck makers in Europe and that it achieved record market share of 16% in the European heavy-duty truck segment last year? That's a big deal, considering that Europe contributed nearly 30% to PACCAR's total revenue in 2013.

The Foolish bottom line
We have enough evidence that the U.S. trucking market is turning around, and PACCAR is a great way to play the upturn. It has been in the engine business for decades and understands the truck market in and out. Increasing self-reliance on in-house engines is excellent news for the company and its investors.

Investors can also look forward to a bigger share in the company's future success stories. Higher profits encouraged PACCAR to increase its dividend by 8% in 2013, and I'm not ruling out bigger payouts in the future. Don't get discouraged by the stock's paltry current dividend yield of 1.2%. Conditions look ripe for bigger gains ahead.