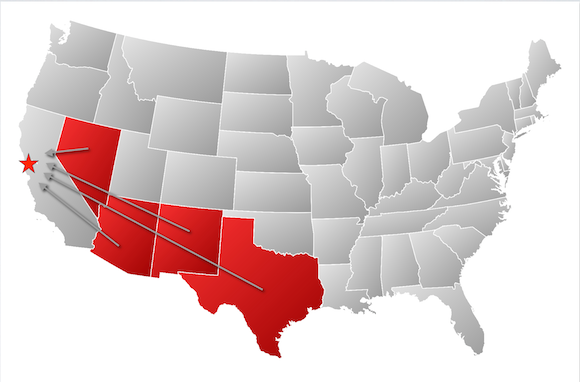 Tesla Motors (NASDAQ:TSLA) is considering Arizona, Nevada, New Mexico, and Texas as contenders to host its Gigafactory. Tesla's upcoming endeavor will boast about 6,500 jobs and will likely prove to be a large source of tax revenue to boot. The Gigafactory is expected produce more lithium-ion batteries than were produced worldwide in 2013. It's no wonder that Arizona is looking to change legislation to win the bid, but with Texas holding firm to its archaic dealership loyalties, why is Tesla even giving the Lone Star State a chance, beside perhaps to gain legal leverage?

Texas has been in the top 10 states in the U.S. to both employ automotive workers and to house auto-manufacturing establishments. Of the approximately 34,000 auto-manufacturing employees, about 17,000 of them work in the parts-manufacturing sector, the largest of the vehicle sectors in Texas. In fact, the motor-vehicle-parts sector has seen more that 29% growth since 2009. In 2011 alone, Texas' parts sector accounted for almost $5 billion in total value of manufacturing shipments and 5.5 million in payroll.

Having such a large pool of skilled labor with extensive experience in parts manufacturing would likely prove to be quite useful when Tesla is looking for potential Gigafactory employees.

Networking
Texas has a number of research and development companies with whom Tesla could potentially partner. From automobile semiconductor producers, test facilities, and research institutes, Tesla would be among good company if it needed to expand its R&D partnerships.

Location
As of now, Tesla is an all-American brand, but that doesn't mean that future Mexican partnerships are out of the question. Locating the Gigafactory in Texas makes any future endeavors with our neighbor to the south a bit more feasible. The NAFTA superhighway, which runs through the state on Interstate 35, positions Texas to be an ideal location for both potential manufacturing partnerships, as well as for battery exports. This is especially important considering the NAFTA provision that any product of at least 62.5% American, Mexican, or Canadian parts to be duty-free.

That's where foreign trade and logistics come into play. In 2012, Texas ranked as the No. 3 state for transportation equipment exports, which were valued at over $25.2 billion. Of those to whom Texan vehicle components were exported, Mexico and Canada were the top two destinations, making the NAFTA superhighway all that more important.

Of the top contenders for the Gigafactory, Texas is the only state that isn't landlocked. In fact, in 2012 Texas ranked as No. 2 in the nation for total port-level trade for vehicle-related goods, including both imports and exports, which were valued at over $69 billion. 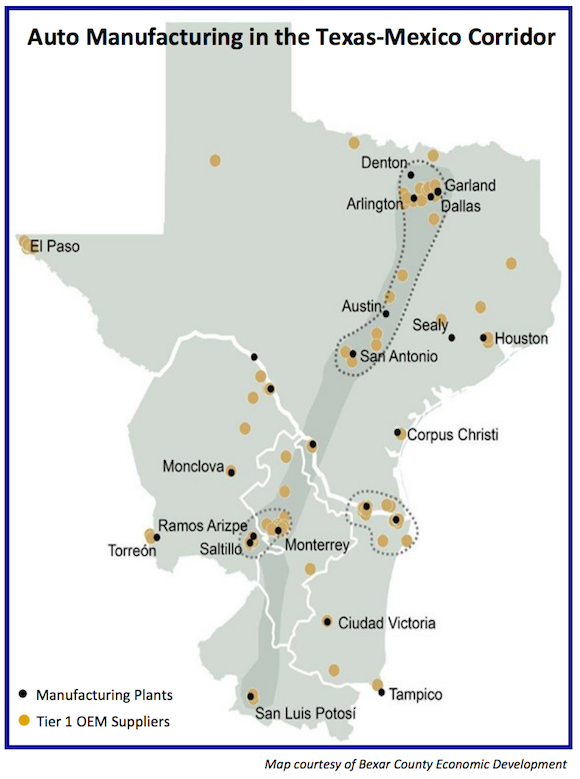 Considering Tesla's inroads into China and Europe, having access to bustling port trade will likely prove to be quite useful once its battery line comes on line.

Big Texan bucks
Texas has marketed itself as "Wide Open for Business" and has implemented incentivizing programs to back up that assertion. In 2005, the Texas Legislature created its Texas Emerging Technology Fund with about $200 million to spur and finance innovation in a number of automotive technology industries. At the end of 2013 only $6.6 million of that total had been claimed, including a cool million going to ActaCell, an Austin-based lithium-ion battery company. It follows that the Gigafactory might win Tesla some big Texan bucks.

Texan pride
Texas has a lot to offer, but it would be presumptuous to assume the deal is in the bag since there is still this huge issue with the state's direct-sales law that restricts Tesla from selling in the state. Is the Gigafactory enough to overcome Texas' loyalty to its car-dealerships' lobby and the infamous Texan pride?

This factory will produce more lithium-ion batteries than were produced worldwide in 2013. To meet this goal, the company will have to employ about 6,500 people, about a 20% increase to the 34,000 or so automotive manufacturing employees in Texas. The economic boost that the Gigafactory could present by way of tax revenue and jobs is undeniable; Texas would be stupid not to do all it can to win the Gigafactory bid.