The market correction continues to test investor resolve, but longtime market watchers know that sometimes, the best money-making decisions come from buying great stocks at great prices. Often, that means buying when everyone else is selling.

If that's the case, the current market slide may be creating an opportunity for investors who have wanted to own biotech giants Celgene (NASDAQ:CELG) and Amgen (NASDAQ:AMGN), but have been afraid of overpaying for them.

With that in mind, let's take a look and see how cheap these two biotech darlings have become. 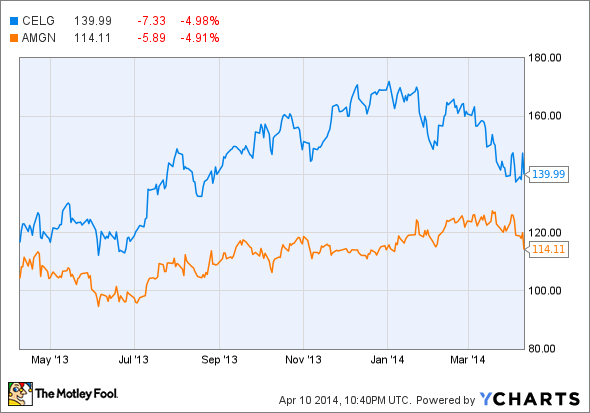 Valuing cash flow
Biotech companies are always pumping money back into drug development programs to discover the next blockbuster therapy. However, many of those promising therapies fail during trials, exposing biotech investors to greater risk than if they had invested in tried-and-true industries like consumer goods.

Arguably, that risk should keep most value-oriented investors at bay. However, there are some rare, exceptional companies, like Celgene and Amgen, that are enjoying a seemingly endless string of hits.

Celgene's Revlimid is one of the most widely prescribed therapies for myeloma patients, generating $4.2 billion a year in sales. And Amgen's Neupogen is one of the globe's best-selling cancer drugs, with sales of $5.8 billion worldwide last year.

The success of those drugs means that these two companies kick off plenty of shareholder-friendly cash flow. As you can see in the following chart, Celgene's free cash flow has doubled since 2011, to $2 billion, while Amgen's has steadily remained north of $4 billion. 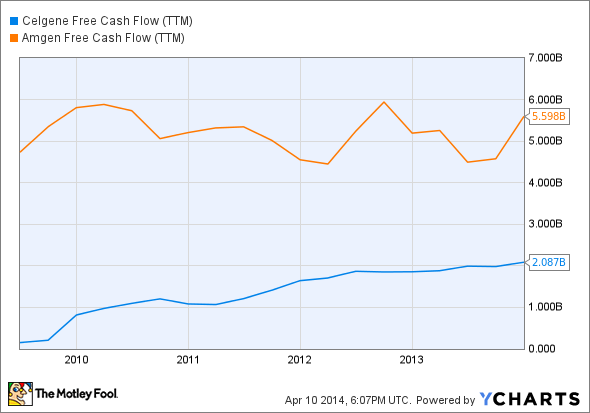 Valuing earnings
But how pricey are Celgene and Amgen in relation to their earnings power? Price to earnings is one of the most commonly used measures of value, and that ratio, which divides the market price by the trailing, current, or future earnings, can help investors see when markets may be too optimistic or pessimistic.

Personally, I like to consider P/E ratios over time to see if they're near five-year highs or lows. Looking at how much investors are paying for trailing 12-month earnings today suggests that both companies have become more attractive, but aren't cheap.

Celgene's P/E ratio is the lowest since last fall, but at 42 times earnings, it's still high. Amgen's is trading at 17 times earnings, which puts it on the low end of its one-year range, but still handily above levels from 2011. 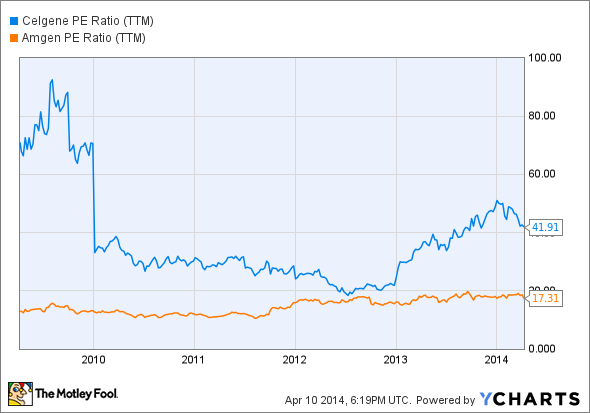 While both companies are arguably pricey on trailing earnings, investors are typically best served looking forward, not backward.

If we consider analysts' future earnings estimates, Celgene shares are trading at about 22 times earnings, while Amgen investors are paying about 14 times earnings for shares. Those ratios aren't bad, but they aren't as good as they were in 2011. However, those ratios may underestimate the potential of both companies, given earnings forecasts often don't model in profit from drugs awaiting approval.

That could suggest that analysts' estimates don't fully reflect the potential for Celgene's Otezla, a recently approved drug for psoriatic arthritis that could also win approval for moderate-to-severe psoriasis. If Otezla's label is expanded, Otezla could win additional market share away from multibillion blockbuster treatments like AbbVie's Humira.

Similarly, analysts may be under-appreciating the potential for Amgen to expand the label for Kyprolis, its own multiple myeloma drug that posted sales of $73 million in the fourth quarter.

Valuing Sales
Another way to consider these companies is to look at their price-to-sales ratio. That tells investors how much they're paying for every dollar of revenue. While the measure has dropped for both companies, neither appears a great bargain. At 6.2 times forward sales, Celgene is well above the four times valuation investors were awarding it three years ago; Amgen's price-to-sales ratio is the highest in five years.

Biotech companies typically get granted higher price-to-sales ratios based on the potential for pipelines to produce future top-line growth. Celgene has been actively financing emerging biotech companies working on innovative early- and mid-stage cancer therapies that could eventually bulk up its top line. And Amgen could win FDA approval in the coming year for evolocumab, a new cholesterol-battling drug that may drive sales higher.

If we set those potential revenue drivers aside, and turn our attention to how investors are valuing earnings and expected growth, both companies look much more intriguing.

Celgene's forward P/E to growth, or PEG, ratio is 1.17 and Amgen's is 0.93. Both fall near the one times level many growth-at-a-reasonable-price, or GARP, investors find intriguing.

Fool-worthy final thoughts
It's tempting to think shares are cheap simply because they've fallen from their recent peak, but that's not necessarily a recipe for success. That's especially true now given that biotech stocks had been taken sharply higher to historically heady levels.

Instead, it's better to evaluate companies over a longer period. That approach suggests that, while Celgene and Amgen have blockbuster products that are kicking off substantial cash and could have potential winners in their pipeline, they're not nearly as inexpensive as they were just three years ago. As a result, the two still appear more attractive to growth, rather than value, investors.

Are Celgene and Amgen Undervalued By the Market? @themotleyfool #stocks $CELG $AMGN Next Article
Current